Consumer sentiment down in the shifting sands of Australian politics

One of the immediate underlying issues in the Australian Government’s budget was well captured by some of the small business commentary I heard at the time. While welcoming many of the changes, a recurring concern was just what it all meant for consumer demand. Would people stop spending? What did this mean for sales?

The budget aggregates suggest that the immediate deflationary impact of the budget is relatively small. However, the impact is likely to be far greater than the raw numbers suggest because the impacts on household budgets seem particularly concentrated in relative terms at lower and middle income families who spend a higher proportion of their income; cuts here flow straight to re 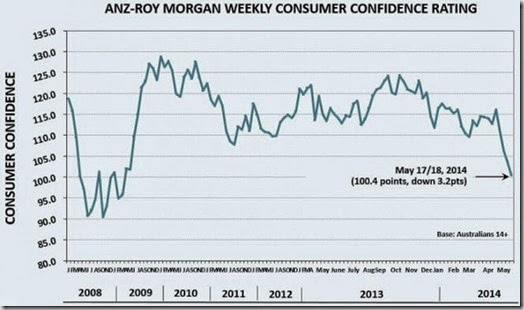 duced spending. It will take time for people to work out what it all means for them. Meantime, belt tightening would appear the safest option where that can be done.

This type of view would appear to be confirmed in the latest consumer confidence data. This shows quite a sharp drop.

It is too early to know whether or not the drop will be longer term.

It seems that the budget debate has drawn youngest into the fray: Abbott Government backs traditional art forms, promises funding for cave paintings. I’m not sure whether or not she will maintain this interest, Political Discord may remain a one post blog, Meantime, it’s quite a funny piece.

One thing that the Australian Government has achieved in all this is to shift the terms of the economic and political debate. To begin with, increased taxation is back on the agenda. One thread is the debate over the GST. a second the State based payroll taxes, with Treasury Secretary Martin Parkinson telling the states to use it to help meet their revenue needs. Then, in parallel, is the debate over Commonwealth-State financial relations. Finally, discussion over entitlements has been replaced by a discussion over fairness.

Now in all this is the National Partnership Agreement on Asset Recycling signed on 2 May 2014. Yes, it’s dry, but the Abbott Government’s infrastructure plans seem to depend on this.  Maybe I’m wrong, I’m sure that people will correct me, but I can’t see any of the states or territories rushing to implement this until the sands have settled. 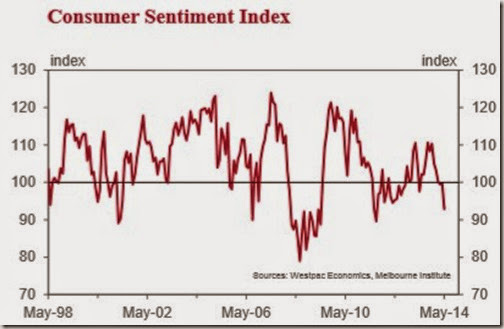 As you might expect, it shows the same pattern of weakening confidence.

Meantime, the budgetary commentary roles on. There are different views on what all this means for economic activity, depending a little on where you fit within the political and ideological spectrum. However, the analysis is slowly delineating impacts.

Yesterday, the Australian Reserve Bank released the minutes of its 6 May Board meeting. This meeting took place before the 13 May budget speech. The minutes summarised the economic outlook in this way:

Members noted that there had been little change in the outlook for the global economy, with growth of Australia's major trading partners in the year ahead still forecast to be around average. The latest data received on the domestic economy had evolved much as expected, with further indications that growth had picked up a little over the past two quarters. This had been driven by very strong exports as well as an increase in the growth of consumption and dwelling investment. However, the Board noted that overall growth in coming quarters was likely to be below trend given expected slower growth in exports, the decline in mining investment and the planned fiscal consolidation.

While a range of indicators suggested that conditions in the labour market had improved in recent months, the demand for labour remained subdued and was likely to remain so for some time. This had led to lower wage growth, which in turn had seen inflation decline for non-tradable items whose prices were more sensitive to labour costs. This was being offset by stronger inflation for tradable items as a result of the depreciation of the exchange rate over the previous year. Inflation was consistent with the target and was forecast to remain so over the next couple of years.

At recent meetings, the Board had judged that it was prudent to leave the cash rate unchanged. The expansionary setting of monetary policy continued to have the expected effects on economic activity. Notably, a sustained increase in dwelling investment was in prospect, consumption had strengthened a little and business conditions were around average levels. Recent developments had indicated that the economy had evolved broadly in line with earlier expectations, resulting in little change in the updated forecasts for activity and inflation. With growth in activity expected to pick up only gradually, and spare capacity in the labour market consequently remaining for some time, growth in domestic costs was forecast to remain contained, which would help to offset the ongoing effect on prices from the depreciation of the exchange rate over the past year. Given this outlook for the economy and the significant degree of monetary stimulus already in place to support economic activity, the Board considered that the current accommodative stance of policy was likely to be appropriate for some time yet.

In a way, some positive features but steady as she goes because of the downsides. I think that’s still right, although the budget has increased the downsides to some extent.

Such cynicism in the young people these days! Please pass on my congratulations to Claire.