The need for quiet places 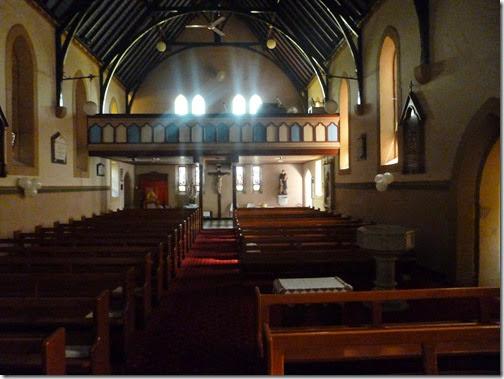 This is the inside of the Roman Catholic Church in Singleton. There is a story to this church and surrounding buildings that I have written about a little in some of my historical writing.

Its an old church by Australian standards, actually smaller than I had expected. When you research something that you haven’t seen, when it’s important to the story you are telling, it acquires a size in your mind beyond the physical reality.

Once, most churches were open. They were a place of refuge, of contemplation. You could just drop in, sit and reflect. Sometimes you might be asked if you could be helped, if you needed something, but most times you could just sit there.

At least so far as Australia is concerned, we live in an age that has lost both its innocence and, to a degree at least, it’s enthusiasm. We live in an age of chatter and of constant movement. The churches that were once open have closed, except for services or events. Too many risks  are involved to maintain open access.

This is another picture of the church from the opposite direction. It is being prepared for the Easter services. 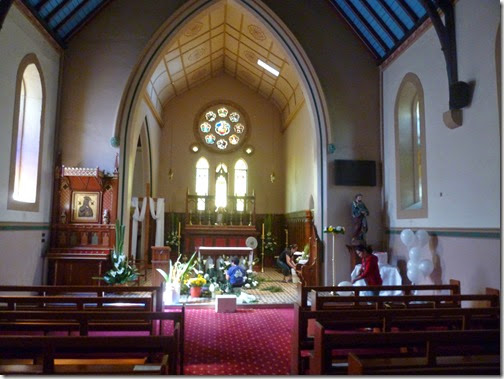 I don’t know about you, but I am a little tired of current complexity. I wish for space and peace.

You don’t have to be a Christian to get a sense of peace from a church. The building is designed for that purpose. You can get the same feeling from a quiet garden  or a bush scene. Still, and increasingly, it’s  becoming harder to find those places.

It’s not just a question of size. Those living in crowded societies, the Japanese and Chinese come to mind, have found ways of building in space for quiet contemplation. Australians are not especially good at this. We crowd, we chatter, we establish formal rules to govern access.

Looking at the church in Singleton, I felt a sense of weariness, of ennui. I was, after all, on a journey with its objectives and time limitations. I also felt that I could not just sit in the way that I might have done in the past. I am sure that there would have been no objection, we were allowed into the church even though it was officially shut, but it didn’t seem right. This feeling distracted.

I suppose that the need to find quiet places has increased with age, but it’s always been there.  Like most of us, I have memories with value that continue to come back, that I can call on. The garden at Lanyon with its big English trees providing shade on a hot day; a New Zealand beech forest; the backyard at Marsh Street. Sadly, as i get older I find it harder to find new such places. Maybe it’s just me, but the feeling does appear to be fairly universal.

I've had to experience a lot of hospitals lately due to my daughter having many special health matters. However, when the stays at hospital become too much there seems always to be a little chapel available to seek some time, escape, hope and peace.

In that sense we are lucky we find ourselves in a hospital founded on religious principles (The Mater in Brisbane). Even though I am not a catholic I find the chapels are essential and I simply don't know what I'd do if there was no such space.

Good luck Rod, and I know exactly what you mean, from the times my wife was fighting illness.

Jim, a lovely post with which I fully agree, and to which I say Amen.

Rod, I knew that there was illness in your family, but did not know that it was your daughter. My thoughts are with you. You capture my underlying idea so well.

Thank you kvd. A friend (AC) has been after me to write more of these sorts of posts. We all need, can I use this word?, spiritual refreshment.

AC sounds like a friend to keep, and someone to listen to.

But I'm only commenting further to say that I thought the pictures you included with the post are quite beautiful, and remind me of my own little church at Meroo Meadow, sadly also not open to the passerby except by appointment.

I do like the reflective mood of your post and looking at the beautiful pictures I feel suddenly peaceful.
I think it is worthwhile to spend time in search for quiet places and then visit them when we can. After all cars need refuelling and we benefit from tanking on, dare I say, spirituality.
Thank you kvd for your kind words.
AC

They are nice photos, kvd. And AC is a friend to listen to and keep. I am always experimenting with my writing. I find that the more political posts get the largest responses, and they are important, but I like the more reflective posts.

The posts I go back too, the reference posts (the Greek series comes to mind), are those where I have loosely explored around a theme. I like learning.

I did like it, Evan, and especially the last verse.