Much of Sunday afternoon, Monday night plus three hours this morning before I went to work, were spent first on trying to fix email problems and then on resolving quite aggressive virus/malware issues. Given that this meant that I had not been able to write pretty much anything, I was so looking forward tonight to coming home and settling in to writing. But it was such an early start and then busy day that I was exhausted by the time I got home. 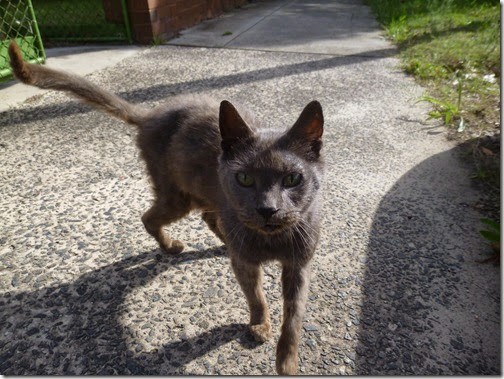 In an earlier post I mentioned the stray that I felt obliged to feed, in part because I had known him for two years (I’m sure that he had belonged to someone). I called him Blackie; obviously he is not. Still, Scrawny is not a bad name.

For the benefit of the pet Nazis in our midst, he is not my cat. I have neither the time nor money to put him through the cat registration process. I am simply stopping a nice and well natured cat from starvation.

Speaking of Nazis or at least the Authoritarian robotic rule makers who now dominate public policy, we were talking today at work about the impact of the latest anti-smoking laws in prisons and especially mental institutions. The mark of a psychopath is lack of human empathy. The mark of an authoritian system is rules enforced conformity. There seem to be a lot of both around at the moment, For the first time, and it is a first time in this country,the word cruelty has entered the public debate as a marker. I hadn’t seen it before, but I think that it’s right.

The latest Australian Government action on boats may or may not be cruelty. I don’t share some of the views of refugee advocates, but it certainly seems to have had a further adverse impact on our relations with Indonesia.  The practical suspension of our cooperative relationship with Indonesia continues. Assuming the newspaper reports are correct, It is hard to see how the relationship might be fixed before the Indonesian elections.  And then there will be a new and probably less sympathetic Indonesian president.

Turning to more positive matters, I began a series with Towards a new approach to economic and community development 1 Introduction. Winton, while I have only done one post since I haven’t forgotten. The New England aviation series is actually part of the story.

On a still more positive note, kvd will remember my 2010 Greek trip series. I am now doing something similar with my recent trip to the Hunter Valley.  So far only two posts, but I am working on a third. This is the first post in the new series: Journey to the Hunter – Friday 18 April 2014: the adventure starts

I am enjoying this new series Jim - thank you.

It caused me to go searching for proof of a strong childhood memory (late '50's) of a road trip I did with my father from Brisbane back to Lithgow. This included a very clear memory of driving through a very long road tunnel - your post mentions the Putty Road which I pursued, but I now have found that it was probably at Cox's Gap on the Bylong Valley Way.

As an interesting aside, I discovered that this same tunnel was used as the opening sequence for Peter Wherret's Torque tv program - itself now many years ago.

You mentioned your unfinished Greek series: the enjoyment I got from that was a mixture of your own writing, coupled with the fascinating links to other research and articles you incorporated. Thus, a 300-word essay was easily expanded into hours of internet browsing thru your chosen links - learning and re-learning quite a lot along the way. Fascinating stuff!

Funny KVD should mention that tunnel: I was up that way on the ANZAC weekend myself and walked up to one tunnel entrance. I subsequently found this picture:

And nice cat picture, J, but that's a tricky question about what the position is if you feed a cat, whether or not it goes so far as obliging you to register and microchip it (I'd say, not). What does it eat when you go away?

If our treatment of asylum seekers isn't cruel I have no idea what the word could mean.

Eichmann is a new kind of moral dilemma I think - due to the modern domination of bureaucracy. He certainly fits my idea of a psychopath and he certainly seemed willing to follow rules.

marcellous, you inspired me to check youtube - and I found this:

As for the cats and what they eat when you're not there: the souls of dead people ;)

The tunnel was built for the Sandy Hollow Maryvale railway. When construction of the line was abandoned in 1951 (http://en.wikipedia.org/wiki/Sandy_Hollow_%E2%80%93_Gulgong_railway_line),it was used for car traffic.

When I was driving between Armidale and Canberra return so many times, I discovered the Bylong Road as one fun route, so drove through that tunnel a number of times. I haven't been that way since the railway opened. So actually a bit of a nostalgia trip for me.

The away issue hasn't really come up in terms of many nights, marcellous. With Avenger I leave food inside. He knows how to get in and out of the house. With this cat, I might have to try and find a neighbour; share the pain and avoid consumption of deal souls!

We studied Eichman as a test case when I did public service ethics first all those years ago. When should a civil servant draw the line? This was about ethics, not rules. I wonder if they would still use him as a case study?