Another Saturday Morning. Up early; Avenger immediately demanded to be fed. I have now ended up with two cats to feed.

I have had a nodding acquaintance with Blackie, a neighbourhood stray, since I first moved into Astrolabe Road. It seemed quite a big cat, well fed, and apparently belonged across the road. I say apparently because it was always there. Recently, it has fallen on hard times becoming a shrunken vision of its former self, emaciated with big patches of missing fur. In the end, I couldn’t bear it any longer, so gave it an meal. Cats aren’t stupid, although they are very dumb compared to dogs. One meal led to another!

Our blogging friend AC is back in Poland, something she writes about in Back in Gdansk. She is there at a 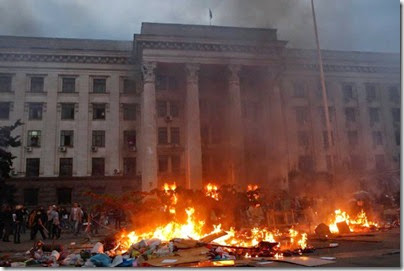 somewhat difficult time given the Ukrainian crisis. This goes from bad to worse (Ukraine unrest: Military trying to retake eastern town of Slaviansk, say pro-Russian rebels, Ukraine crisis: Dozens of people killed in building fire, more shot dead in Odessa). Poland has a small border with Russia via that strange anomaly known as the Kaliningrad Oblast, a somewhat larger border with Ukraine, so the Ukrainian troubles are naturally a matter of concern within Poland.

One of the things that I hadn’t properly realised until this crisis broke was the extent of EU dependence on Russian natural gas. Thirteen pipelines link Russia with Europe: three are direct pipelines (to Finland, Estonia and Latvia); four go through Belarus (to Lithuania and Poland); five through Ukraine (to Slovakia, Romania, Hungary and Poland); and one to Germany via the Baltic Sea.

I had thought, naively, that Europe would have been able to import natural gas from other sources if Russian supplies were cut off. It’s not as easy as that. There are both price and supply questions. In simple terms, in the event of a cessation of Russian exports, supply chain issues mean that gas prices would skyrocket while European demand would have to be suppressed by rationing. That explains some of the EU reluctance to take strong action in the current crisis.

Just at the moment, I would be inclined to buy shares in Woodside or any other Australian gas entity. Looking at events in Eastern Ukraine, some cessation of Russian gas supplies to the EU would seem inevitable. I just don’t think that Mr Putin has the subtlety to handle the forces that he has unleashed.

In the short term, European gas politics continues. This Reuters story will give you a feel. All this will be swept away if, as seems increasingly likely, the situation in Ukraine ends in Russian intervention. It may be that the Russian special forces that Mr Putin appears to have committed to Ukraine will be sufficient to carve out a quasi-autonomous area that Russia can either negotiate with or absorb while Kiev remains helpless. At present, it seems more likely that the position will deteriorate to civil war and planned Russian intervention.

Europe went through two dreadful wars in the twentieth century. There is no taste for another one. In military terms, Europe will go just so far and no further. Mr Putin is counting on this. However, Europe cannot simply stand by.

I don’t believe in attaching precise probabilities to highly uncertain events, although I do so from time to time because it makes explanation easier. My best guess is that Europe will draw a line.

In government offices across Europe, officials are presently huddled in conclaves: what are the risks; what might happen if we do this; what should we do if they do that? I suspect that they are no clearer than I am.

Returning to Australia, the continuing investigations by the NSW Independent Commission against Corruption (ICAC) has another scalp, this time Police Minister Mike Gallacher. There is something unpleasantly like a star chamber in the way that ICAC is conducting its affairs. There is too much ambush for my liking. It’s not necessary.

The combination of Ukraine with ICAC has cast a real gloom over what started as a nice day. It’s not helped by the total collapse of my email system, that’s another story, nor by Canberra events.  For the life of me, I cannot understand what the Abbott Government is on about. I know that’s not very good English, but you get my drift. There seems to be a total disconnect between rhetoric, proposals and reality. The good, and there is some good, gets lost in the rhetoric.

One of the points about a change in government, the reason why they are necessary, is to challenge the status quo. Mr Abbott is certainly doing that. But I so wish that the government hadn’t locked itself in in the way it has.

With Ms Gillard and her administration, i said that the problem was to find that quiet spot, that point of stability, that would allow them to regroup, It didn’t happen. The same applies to Mr Abbott. Once commentators start talking about a one term government, you know that there is a problem. Mr Abbott needs two or even three terms to bring about change. I doubt that he will get it.

Meantime, Labor in NSW is blessing it’s lucky stars. Having, rightly, wounded the previous Labor administration, ICAC is now damaging the Liberals. Who would have thought it? The combination of Mr Abbott’s  missteps with ICAC is rapidly rebuilding Labor strength at branch level.

Sadly, neither Labor at NSW or Federal level is really presenting an alternative. They don’t have too. All they have to do is wait.

Geez! All this (about gas supplies to Europe) was canvassed in comments on your March 2nd/3rd post on Ukraine. And also the Polish angst of living so close to such an unstable regime.

"My best guess is that Europe will draw a line."

They could maybe borrow one from Pres. Obama? He has several, unused, which are probably spare (they are certainly inactive) - I would have thought.

On a lighter note, did you read Paul Krugman's latest: http://www.nytimes.com/2014/05/02/opinion/krugman-why-economics-failed.html?_r=0

- which includes this agonising rhetorical: "Why, at the moment it was most needed and could have done the most good, did economics fail?"

The sheer presumption behind that question! Where's my cornflakes bowl :)

I listened to an expose of the Polish Prime Minister this morning. He definitely is not a panicky person but in his measured and composed way he expressed concern for Ukraine and stated that Russia and Ukraine are already at war even if it has not been formally declared.
AC

It was, kvd,as you note. I think that the point about lines is just where the line is drawn, what does this mean for later events? But this was canvassed too!

I fear that that cornflakes bowl is the repository of more things than I care to know about! Read the Klugman piece. Think he misses a few key points.

Undeclared war is not a bad description, AC.

ICAC - same thing happened with the painters and dockers. Money, greed, corruption don't have an ideological bias it seems.

Much of Tony's behaviour makes sense from a DLP perspective - just not from the loony neo-liberal perspective that so dominates the majors.

I think Tony thought he had it figured out because he found a way to win government. He hadn't realised how different government was to opposition. Coupled with his belief in becoming different (which David Marr highlighted). Turns out he's just the same in government as opposition - without nuance, loath to negotiate, disliking complexity.

This lot remind me of the last years of the Bjelke-Peterson years in Qld. Same narrow blindness and incompetence.

It seems to me that both Abbott and Carr took a 'media management' approach to government. (Both have been journalists.) But Carr pulled it off more successfully. He was less ideological I think - the 'tough on crime' nonsense wasn't exactly a traditional left-wing trope.

With the Canberra news, I don't think I've seen much more appalling mishandling of an initially sympathetic press and public. It's far too early to call 'one-term Government' but some of the clangers that have been dropped are doozies.

James, I suspect that you might be recalling the 1993 Keating election victory over Hewson. Hewson had the election in the bag (IMHO) by pursuing a small target strategy, until he pulled out the GST and Keating finally had an attack point.

If Abbott maintains current form, and Shorten is smart, the latter will go to the election with an entirely negative Abbott-esque campaign and almost no policies apart from 'dump the liars'.

I'm basing this guess on Shorten's refusal to do anything of substance apart from carp a bit on the sidelines and point out faults, not outline alternative vision.

Hi Evan, tough on crime mightn't have been a traditional left wing trope, but Labor in NSW has not been left wing for a very long time. Agree on media management!

That was an interesting election, anon. It wasn't just the GST, but Mr Hewson really did present an alternative view. I don't think that the election results should be read as supporting a small targets approach. Mr Hewson provided just so many targets!