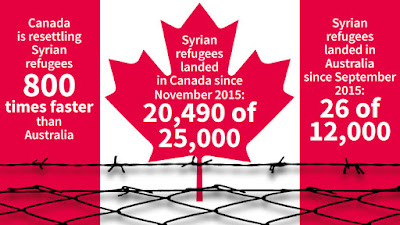 Interesting piece in the Canberra Times by Nicole Hasham comparing the Australian and Canadian responses to the admission of Syrian refugees.

Both countries decided to admit refugees as a consequence of the European refugee crisis, Canada 25,000, Australia 12,000. The graphic shows the difference in performance between the two following the decision.

It is difficult to know whether or not Australia is simply less efficient or whether its a difference in attitude or, more probably, a combination of both. The detail provided in Ms Hasham's piece suggests that Australian NGOs who had geared up for a fast response found themselves effectively stuck out on a limb, incurring additional costs while they waited. Australia's administrative and policy systems have become rather sclerotic for reasons that I have outlined before. However, attitudinal differences are also important.

The article includes video of Canadian Prime Minister Trudeau's welcome to the first group of refugees. While Canadian attitudes seem to reflect the same type of polarisation found in this country, the Canadian PM used the event to make a positive statement about Canada and Canadian values that provides a degree of pride and indeed inspiration. It's hard to see that happening in Australia..
Posted by Jim Belshaw at 11:30 pm

Meta comment: Do we all find this too painful to talk about?

Putting the distinction between refugees and "economic immigrants" to the front, let's define the former as running away from everything through eviction or fear of death and the latter as not being forced to move but choosing to do so in the hope of a more comfortable life.

Charity says we should extend a helping hand to the former. Our low unemployment rates and desire for people to contribute says we should encourage the latter. Someone who is healthy and not a criminal* and is willing to risk a substantial amount of money and their lives is probably a better bet than someone whose sole qualification as being economically and socially positive is their place of birth, or citizenship papers.

*Someone who has attempted to illegally enter Australia is not a criminal until convicted and our entire system is geared to not letting them get a foot on Australian soil, SPECIFICALLY to avoid them being subject to Australia's legal system. LE would know better than I, but use of the term 'illegal immigrant' or 'attempted illegal immigrant' by a Minister for Immigration to refer to a person would probably hopelessly prejudice any case against them. I assume this is why our ability to let permitted refugees in is, in Jim's word 'sclerotic'.

You may well be right in your meta comment, 2t. We do find this too painful to talk about. I think that you are also right in concluding that the combination of rhetoric with policy explains Australia’s poor performance in meeting its own targets as compared to Canada. It is impossible to imagine Australian PM Turnbull driving admission and welcoming refugees in the way the Canadian PM did.

I think that the Government has long given up on arguing a nuanced line over refugee policy and indeed migration in general. The left is deeply riven by the conflicting desires to limit population while still admitting refugees. The Opposition is effectively locked into the Government’s policy. The end result is a moral coarsening of public policy.