In a comment on Wednesday’s post, Response to the Syrian refugee crisis - Australia v Canada, 2 tanners wondered in a meta comment "do we find all this too difficult to talk about?" He was referring specifically to discussion on this blog.

In response, I wrote:

“You may well be right in your meta comment, 2t. We do find this too painful to talk about. I think that you are also right in concluding that the combination of rhetoric with policy explains ’s poor performance in meeting its own targets as compared to . It is impossible to imagine Australian PM Turnbull driving admission and welcoming refugees in the way the Canadian PM did.   Few would argue, I think, that should have open boarders. The question then becomes where you draw the line. has open boarders for economic migrants so long as they meet set criteria, closed boarders for refugees.

I think that the Government has long given up on arguing a nuanced line over refugee policy and indeed migration in general. The left is deeply riven by the conflicting desires to limit population while still admitting refugees. The Opposition is effectively locked into the Government’s policy. The end result is a moral coarsening of public policy”. 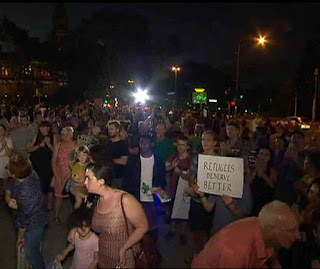 As I write, protests continue over the treatment of baby Asha. It is easier to galvanise (or to attempt to galvanise) public opinion over specific cases than to argue on general principles. The Australian Government has locked itself into policy positions whose inexorable logic drives it in directions that, in the end, damage the country.

The Government is involved in discussions with third countries to take people in the camps on Manus or . Meantime, it cannot accept offers of resettlement from because those people might then be able to enter .

It’s all so unnecessary, but now so inevitable. In the end, the Government will have to do what it can to clear the camps. This will come at a price that already includes human suffering, considerable expenditure and some moral tarnishing. In the end, it is likely that some people will have to be resettled in .

In framing the discussion in such simple black and white terms as stop the boats, this and previous governments have placed the country in an impossible position. The argument that you must stop the boats to stop people drowning is potentially defensible, but only if it forms part of a broader approach based on clear principles that take international circumstances, national interest and values into account.


Values including especially humanity are important. The corrosive impact of current policies lies in the absence of values. We all need things to be proud of. There appear to be no elements in current refugee policy that meet the pride criteria. Indeed, it appears that we cannot deliver even on the commitments that we do enter into. In all, it’s a mess.
Posted by Jim Belshaw at 11:30 pm

In response to tanners' "meta comment": if he is talking about the moral hand-wringing of this and the preceding post - yes, it is all too difficult.

If, on the other hand he (or you, Jim) wish to propose explicit policy changes which would not result in a resumption of the 23,000 annual arrivals recorded just before Mr Abbott's policy, then no, it is not too difficult, and am happy to discuss - and also support, if practical.

And I would also raise an eyebrow (the left one, reserved for mild irritation :) at tanners' "Our low unemployment rates" - given it is presently 6% but with 30-odd% of our workforce employed in casual or contract work, with little hope of employment security.

It’s not complicated kvd. All the elements are there:
1. Australia sets a decent refugee quota, desirably larger than it is now. This can be added to if emergency circumstances require. The central theme is Australia, good global citizens, a humane nation doing its bit
2. Australia sets criteria for erfugee selection from around the world.
3. In the absence of special circumstances, refugees coming to Australia by any means are sent to Christmas Island, Nauru or Manus for processing
4. For those classified as genuine refugees, they are eligible for resettlement in Australia within the global quota and subject to the global selection criteria, For those who cannot immediately gain entry to Australia, Australia will work to find a place for them. Meantime, they can stay in the refugee centres.
5. Those classified as economic refugees will be returned to country of origin unless they meet the general Australian migration criteria.

There are various other elements such as decent education and conditions in refugee camps and support for other countries, but that’s it in simple terms.

1. "a decent refugee quota" - presently 13,750 plus the aforementioned 12,000. Question: specifically what "desirably larger" number do you envisage?
2. do we not do precisely this now?
3. I thought that was a large part of the problem? But you want a "desirably larger" number than 25,000 all cycled through Manus, etc? We're gonna need a bigger island.
4. see 3: "Australia will work to find a place for them. Meantime, they can stay in the refugee centres". And a second, even bigger, island.
5. see 2

Agree with your "various other elements"; also world peace would be good, and dolphins, and also everyone should just love one another.

Agree your list is "pretty simple", but I'd like to see a comment from others on just how they differentiate your simple prescription from what actually happens right now.

ps please don't reply that we do have a 'larger island', and it's called Australia. I do understand that, ok?

It was the dead silence rather than the handwringing I was commenting on.

We can do one of two things, in my simplistic view. We can withdraw from all the UN Conventions we are deliberately flouting (rights of the child, refugees etc) or we can change what we are doing. 23,000 is less than 0.1% of the population and they are nearly all at or under working age. I don't think they are going to be ruining the economy or the fabric of our society. In the past, Tribunals have found well over 90% of them to be refugees and the rest have been deported to their countries of origin.

And we can stop babbling on about saving lives. As a post hoc justification that stinks, especially when we appear to be paying the smugglers to take them back again in the same leaky boats.

tanners, your two options are not specific policy initiatives - more just more of the same old angst. And I am still interested to understand some sort of differentiation between Jim's "it's not complicated" and what we now are doing? With bi-partisan support, it seems.

kvd, I am going to reply to you in full post.

Let me be more specific kvd.

1. Stop wringing hands. Withdraw from all inconsistent international agreements and say "Tough. We're doing it our way." But be honest.

These are both changes to policy. Neither would be supported by the major parties and the second not, I believe, by the majority of Australians.

What we are doing is immensely complicated, incredibly expensive (and that's just the parts we are allowed to see) and yes, supported by both parties. Change 2, as outlined above would literally free up billions.