Armidale Diaries 1 the smoke rolls in

I was sitting here yesterday (20 November 19) working away at the computer when I suddenly realised the world had gone from clear to very smokey.

Armidale has been very lucky in terms of smoke considering how relatively close some of the big fires are. At first, I wondered if there was a nearby fire, but no. The wind had shifted to the east, bringing in smoke from the big fire near Ebor.

That was a strange fire. It allegedly began when an Ebor local decided to back burn to protect his cannabis crop. He made no attempt to control the fire but went straight to the Ebor pub for a drink. It seems that he expected to make some money from post fire reconstruction. The police picked him up at the pub about 5. 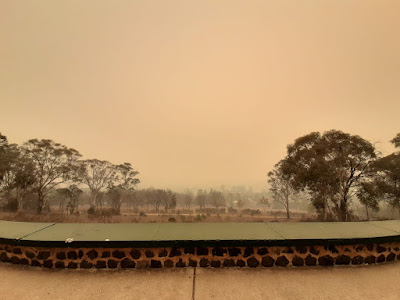 Concentration broken, I decided to brave the smoke and head into town to do some shopping.

The smoke really was very thick. This photo by Tara May from the ABC web site shows the view from the lookout looking down into the basin in which the Armidale town centre sits.

I decided to have a coffee before doing my shopping. The mall was both smokey and deserted. I had forgotten how late it was.

Armidale has a remarkable number of coffee places, too many for the size of the city. They are full in the early morning and at lunchtime, but tend to close early. With so many coffee places the competition is fierce, I was talking to a lady a week back at a history society do who has just taken one over.

I know it. It has music and attracts a younger student audience who like sitting outside when it's fine, Talking to a Council person, the University apparently has some 4,000 internal students at the moment of whom 2,000 live on campus, 2,000 in town. She is reshaping the cafe widening food offerings, removing the music and making it all vegan. Oooh, I thought, that's not going to work.

Armidale's demographic means that there is demand for vegan food, a number of places serve it, but she is effectively replacing the existing customer base with a hoped for new one. I don't think that the demand is there.

Wandering down the Mall past a group of Chinese visitors who were struggling with the smoke and also (I suspect) wondering where everybody was, I found a coffee place open in the Richardson's Arcade. It was very much a modern coffee place with its displays of tea and coffee, speciality foods and nick-knacks. Still, the coffee was okay.

It was almost empty. There was a woman working on her Apple mac. She was obviously chatting to someone online because every so often she would chuckle. A little further away were two men in high vis, obviously involved in some way with the land, but not necessarily farmers.  They knew the waitress and chatted away with her. 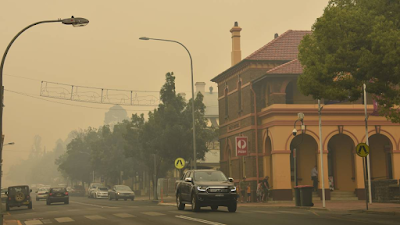 I didn't properly understand the snippets of conversation I heard, but did pick up references to tanks and water as well as an obscure discussion about the relative size of halls for what appeared to be exercise classes.

I did pick up that the waitress's Gran knew the person charged for the Ebor fires. Apparently he was a strange person who had had a very troubled life.

After coffee, I walked back to the car to drive the few blocks to to the shopping centre where I planned to do my shopping at Coles. The smoke was still thick.

I parked outside as i normally do and walked through the smoke to find that the shopping centre had its eastern doors closed because of the smoke. Back to the western entrance.

The smoke wasn't bad inside, although some of the staff and customers were wearing face masks, something that I had not seen before. Customer numbers were down a bit, but were still the usual mix. A lot of older people, although there were not the usual walkers and mobility chairs, women doing what was clearly the weekly shop from the size of their loads, some young families and a few gaggles of students. I followed some Chinese students around while they worked out what to buy. It appeared to be their first visit. 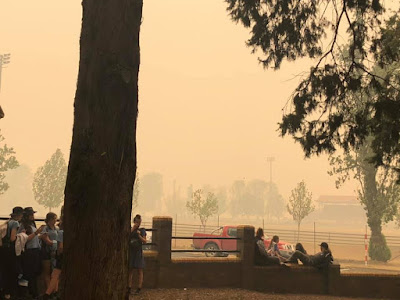 Homewards again. One thing that I found interesting was the way that people appeared to be taking the smoke in their stride. This photo from the O'Connor Catholic School shows students waiting for their buses.

Driving along Dumaresq Street past the Creeklands, the stretch of parks and playing fields that run along the creek through the centre of the city, there were still people walking or practising at the cricket nets,

Don't get me wrong. The smoke really was a nuisance, strong enough to sting the eyes in spots. But people did seem to just ride with it.

Thanks Peter! For every Armidalian, there are three ex Armidalians because we move so much. We overlapped. Were you at uni here?

I suspect that it is, anon, with a dash of Manuka thrown in. A few weeks back, I had coffee with a friend at Cafe Pattiserie in Rusden Street two blocks from the main street to talk about the English children's writer Arthur Ransome. It used to be a corner store and is now an upmarket coffee and cakes place with seating inside and out. I knew a few people, was able to eavesdrop on a few more. Looking around and listening, it did feel like Canberra!

Unknown above is Stephen Holt aka Canberra’s worst ever ARO ( class of 82). Looking forwards to the 2nd letter.

Hi Stephen and thanks. Worst ever ARO?! I didn't think so. We coincided in 83?

Hi DG. Nice to hear from you. Beardy Street is a little sad. The two shopping centres at either end have effectively decimated the middle.

G'day Jim, Phil Godfrey here, just informing the smoke haze was quite prominent here today, on the West Coast of Northern New Zealand. Same thing occurred last week. Not certain whether it is from the NSW or Qld fires, more likely from NSW. Hope you get some decent rain soon.

Hi Phil. Much excitement yesterday sith some storm rain! Interesting on the smoke. NSW fires I think. depends on the wind. I was curious and looked up latitudes. Auckland is 36.8485, Sydney 33.8688, Armidale 30.5106. I would guess the combination of Sydney fires with add ons from New England