William Strutt, Black Thursday, February 8, 1851, These fires burnt approximately 5 million hectares, or a quarter of Victoria; 12 lives were lost, along with one million sheep and thousands of cattle.

Like many Australians, I spent a fair bit of yesterday Tuesday 12 November glued to the live fire updates. a focus intensified because so many of the fires were in the broader New England. 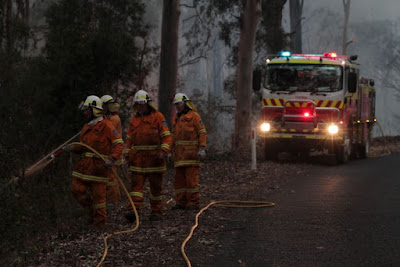 This photo shows fire fighters at Tyringham east of Armidale.

Because of its regional airport as well as its proximity to some of the fires, Armidale has been something of a logistics hub. The planes have been full of firies and National Parks staff coming and going.

On Monday I manned the Armidale & District Historical Society office. A group of Canberra firefighters passing by came in to look at the exhibits. They were obviously going home after relief service. Instead of the usual high viz with smoke smells, they were all in neat uniforms!

In the midst of the fires there have been the usual stories of courage, of endeavour and humour and hope as well as personal hardship and tragedy. One such story about the borrowed milk has been widely carried on the media in Australia and overseas. 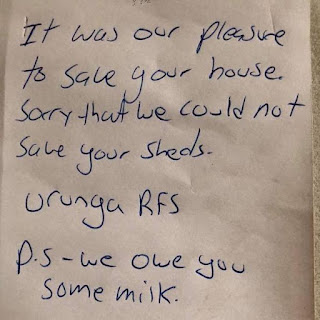 In all the media coverage on the fires, I have become very annoyed with the nature of some of the discussion.

Before going on, I have been back through my past posts dealing with bush fires. I have listed these at the end of the post. They are concentrated in the period 2006 to the end of 2013. I'm not quite sure why I stopped writing then. Was it because of shifts in my interest or because the questions had become somehow less current?

The posts are necessarily fragmentary, but I think they provide a picture of events and issues that are still relevant today. I also note that fellow blogger Neil Whitfield had a useful piece today, The million (and more) hectare fires.

The first point I noted in reviewing past material is the frequency with which the word unprecedented has been used. I find this a slippery term. In literal terms, it means never done or known before.

The declaration of catastrophic fire conditions of the the Greater Hunter, Greater Sydney and Illawarra Regions was unprecedented in the sense that it had never been done. This particular condition classification was only introduced in September 2009. This was the first time it had been applied to such a large area. However, it says nothing about fire activity as such.

As I understand it, the term is used to describe particular sets of conditions (high temperatures, very low humidity and possible winds) which both make fire likely and extremely difficult to control. Thus does not mean that fires will start, nor that those fires will run wild. Indeed, and I stand to be corrected on this, I am not aware of any really major fires in areas covered by code red. Those big fires that have occurred have been in areas classified as high or extreme fire danger.

Code red is a risk assessment classification. Its use in in this case combined with school closures and other precautionary measures had the effect of adding drama to an already dramatic scene. It was only human to watch the code red areas waiting to see what might happen. I am not being critical of the NSW Government's decision on the categorisation, I am sure that they had expert advice, but it is important to distinguish between a risk assessment and an actuality.

The mixing of climate change and the immediate fire position is another problem area, one that I dealt with in Fires, drought and climate change within New England. As I said there, climate change is a macro long term global problem. It's an input into fire policy and associated mitigation policies. No matter what climate change policies had been adopted by Australian Governments they would not have affected the likelihood  of these fires. although they may have affected mitigation measures to some degree in the sense that management of the possible effects of climate change such as hazard reduction burns might have been pursued more vigorously with less red tape.

Beyond the effects of the climate change debate policy towards both drought and fire policy, there is a broader issue. How do we translate the short and medium term implications of climate change into effective policy dealing with drought or fire mitigation, recognising that the on-ground effects are very uncertain. For example, if we need more fire fighters, how many more, where do we place them?  We have to take the general arguments and conclusions about climate change and give them specific geographic content. Here I put forward a specific hypothesis for test so far as the broader New England is concerned linked to movements in weather patterns.

If you read and think about that hypothesis, it has some quite profound implications in areas such as the Murray-Darling basin plan. I said hypothesis for test. I am getting a bit tired of generalities. I need things that can guide real action beyond the very macro. And that needs geographic specific analysis and test.

I note for the benefit of my climate change sceptical friends, and I have a number, that there is a distinction between what is happening and the reasons why it's happening. You can address what is happening without agreeing why. The two are separate questions.

Finally in this post, I want to turn to fire mitigation members. I note that I have a certain sympathy for some of Mr Joyce's views, although his language is unfortunate to say the least. Neil referred to a Guardian piece, Factcheck: Is there really a green conspiracy to stop bushfire hazard reduction? I did not think that this was a sensible piece in the sense that the question and answer were skewed.

I first came across the clash between environmental considerations and fire management in 1972 when meeting with sets of graziers who adjoined the Kosciuszko National Park. Their argument was that the withdrawal of grazing and the absence of proper fire management in the Park had greatly increased fire risk to their properties. In the years since, I have heard many more examples, including the inability of people in bush fire prone areas to extend hazard reduction steps into narrow strips of adjoining state land as well as frustration from farmers unable to do burning-off on their own land. There have been more examples this time, including the disappearance of fire trails that once allowed access within national parks in particular.

Where Mr Joyce misses the point, however, in his political attack on the Greens and other environmentalists is that the current position has evolved with time, changes over time and includes a variety of factors including cash constraints on National Park Services and the rise of new regulatory cultures focused on minimisation of risk and legal liability. Environmental considerations whether expressed by the Greens or anyone else are only one factor in the equation,

In this context, ABC Radio National carried an interesting interview this morning with David Bowman, Professor of Pyrogeography and Fire Science, University of Tasmania, on Hazard reduction burns just one piece of the puzzle. One of his points, if I interpret him correctly, is that individual fire reduction activities carried out by people who know their land is no longer possible because of the regulatory constraints, This is the price we have to pay for our evolving regulatory approach designed to manage risk and legal liability.

I am sure that these issues will be debated once we come to the end of the current fire season. They need to be, especially if you accept that climate change is a problem. However, that analysis needs to be based on evidence, recognising that clashes in objectives will arise. I would also argue that action needs as much as possible to be pushed down to local level.

This ABC story by Kate Doyle, Fire, climate change and prescribed burning: What do the experts have to say?, contains some interesting material.