Armidale, drought and the need for balance in thought and reporting 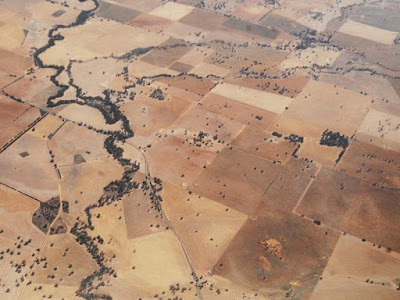 It's been very dry up here on the New England Tablelands. Trees are dying that have survived previous droughts.

Having been through previous droughts, I was sceptical of some of the claims around this drought. I will leave it to the statisticians to decide whether this is the worst drought in the historical record, recognising that the intensity varies from place to place.

It's almost certainly not the worst drought we have had over the last few thousand years. The material I have read, I'm sorry I can't give links: I just picked it up in passing, suggests that there have been a number of very long dry spells since the ending of the Last Glacial Maximum. By long, I mean a thousand or so years.

What I can say is that this is a very bad drought, worse than I had realised. I know Northern NSW well and have been following the media reports and the social media feeds. I don't mean to be  rude, but I don't think that most urban folk have any real understanding of the on-ground position. I didn't until I returned to once familiar walks and saw the dying trees, until I listened to country people talking in passing about areas that I knew and the problems they were experiencing,

I am not happy about the approach to drought policy. At local government level, the councils (at least Armidale Regional Council) have been so caught up the hype that they have introduced what seems to me to be silly restrictions. There seems to be little sense of timing, little focus on addressing the complexities involved in the composition of water restrictions.

The Council web site carries the banner headline 398 days to day zero, the day Armidale runs out of water, down from 420 a few weeks back. That will not happen. It assumes no rain for a very extended period. There will be rain in that period, even if drought continues through out. Water restrictions can be tightened again. The Council has been putting down bores. Some water is available in Puddledock dam.

Mind you, I may be wrong and if so I will acknowledge it. It is a bad drought. It is also a drought that covers a wide geographic area. Water supplies are having to be shared between towns and between towns and country. Scarce town and farm water is also being used for firefighting.

Again to use Armidale as an example. Built to supply Armidale, the Malpas dam is now also supplying Guyra as well as some outlying farming areas where water for household consumption has run out. Water has been trucked for considerable distances. The Puddledock dam, previously Armidale's main supply, is reserved for emergency purposes, including firefighting.

City folk have picked up all the hyperbole. This includes presentation by the media of Armidale as a basket case (who can resist day zero?) when, in fact, the city is equal to or better off than other places with lower level water restrictions.

The problem is that at a time when we want people to move to the regions, people have begun to argue why go when there is no water. Better to concentrate in places like Sydney where there is water. This type of argument has begun to worry some of the country mayors who, while recognising current problems, are trying to strike a balance between the short term problems and longer term needs and objectives.

The argument is in fact silly at multiple levels.

Consider the case of Sydney which is presently on level one restrictions as compared to Armidale's level five, prospectively level six.

The Sydney desalination plant has been fired up to provide supplementary if expensive water. However, 87% of Sydney's water still comes from rainfall. At present, the Sydney water storages are just over 47% capacity as compared to a Malpas dam level of a bit over 38%. Both have been falling. Sydney is wetter than Armidale, but it has a faster growing population and a much heavier water usage in industry and construction. Why then the differences in hype?

This is not meant to be a Sydney v the bush argument, nor am I saying that the drought is not bad. It is simply an argument for balance in reporting. To my mind, some of the emotion surrounding current discussion is interfering with longer term thought, with the development of solutions to meet needs that vary greatly across geographic space as well as time.