Monday now Wednesday Forum - how do we make up the exercise deficit? 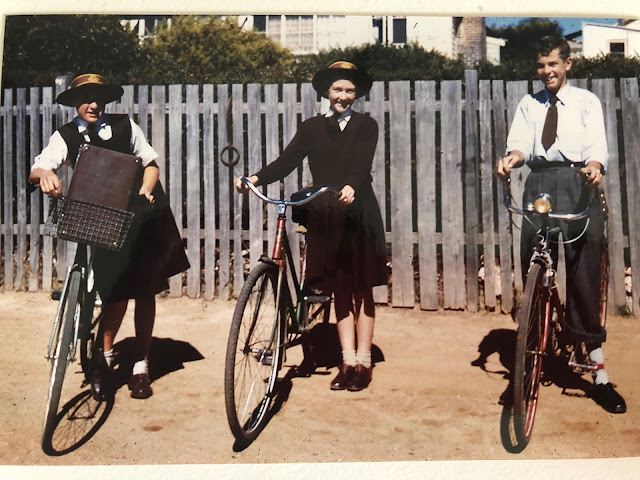 There has been much worry about the poor exercise among Australian teenagers. This story is an example: 140th out of 146: Australian teens do close to the least physical activity in the world. This worry is associated with worries about poor diet, obesity and our failure to allow our children to take risks or, more precisely, to learn how to to take risks. The answers provided generally go to the need for special activities or programs with associated measurement.

I think that I got a lot more exercise than, say, my daughters did and they got more exercise than many kids. Most of my exercise came outside organised sport, although I played a fair bit of that at  secondary school. But am I right or have I been caught in a popular myth about the past?

I thought that I would test this by plotting my daily routines as a child and young adult. I will draw a discrete veil over what happened when I got to university.

Today we seem fixated on paces, with many people striving for 10,000 paces. In measuring I am using 2,000 paces to a mile as a rough approximation, recognising that this varies. I use a mile because that was the core measurement then. I haven't plotted my routine in detail. I might try that later. I'm just looking at indicative numbers.

Walking to primary school in the morning, coming home for lunch, returning and then coming home again. depending on which way I went, I sometimes took a longer route, around 660 yards each leg. about 2640 yards per school day. That's about 1.5 miles or 3000 paces.

When I went to secondary school the walk was a little longer, about 880 yards or half a mile. Again, I would normally come home for lunch. That's about 2 miles or 4000 paces. Sometimes I would bring lunch, We have to deduct that. On the other hand, I would run to school sometimes if I was late.

At that point, TAS was predominantly a boarding school. I was one of the relatively small number of day boys. It wasn't unusual for me to walk back to the school for sport, to go the pictures on a Saturday night, to attend a play or some other event or detention on a Saturday morning.

Whichever way it goes, during term time I averaged between 3000 and 4000 paces per day just getting too and from school. Many kids are driven to school now or travel by bus or public transport. That can involve walks, but its probably still fair to say that a base 3,000 paces has been taken out of the exercise routine.

The city centre was a mile, 4,000 paces return, from home. That was where the library was, a place I visited at least once a week in primary school. In secondary school, I had so many books at home and the school library that  visits dropped off.

Then when we wanted to do shopping we would head down town, although sometimes we would be drive. Sunday was church, also about 4,000 paces return. My parents did not go, but thought we should so we walked. For a period after going to secondary school I stopped going, I had enough at school, but then started going again.

Memory is a tricky beast. Looking at what I wrote, going to sunday school and then church was a big ask. I had forgotten that sometimes in primary school I used to head out for a walk early on Sunday with the  aim of getting back to late to go to church, arguing that I had just forgotten the time. Memory is that I got away with it at least some of the time.  Those were quite long walks, they had to be. A 3 mile, 6,000 paces, walk was not unusual.

For a longish period.  scouts were once a week.  That was about 1,800 paces each way. Then at scouts there were the usual games including wide games. The last carried across into the church youth group where a couple would be cent out to mark the pavement with widely spaced arrows. Only they knew the end point. The rest followed after half an hour.

Especially at primary school we played very widely. Calculating this is quite difficult because the varying pattern makes it quite fiddly. Excluding organised sport, there was very little of that, we played cricket and tennis, my grandfather had a tennis court, hide and seek across wide areas and played with billy carts.

Getting a bike in fifth class made a difference because now we roamed much more widely. Not as widely as some, mind you. Secondary school made a difference too because of the changes in structure. There was less free play, more organised structures. Outside school sport, we played tennis and squash but still walked long distances. Sunday afternoons during school term, a border friend and I would see how far we could walk after lunch in the time available before he had to be back in school. From memory, I think our record was 14 miles, 28,000 paces.

None of the exercise I have been talking about involved parental supervision. We did not expect it, now would we have welcomed it in most cases. My father did play with us sometimes in games such as backyard cricket, but that was about it.

In saying all this, I am not saying that we exercised all the time. We did not when it rained! Further, I've been an avid reader since an early age and spent much time curled up on my bed.

I have left organised sport out of this discussion. I did play that at secondary school and especially in the last years with rugby when there were two training sessions plus one to two 80 minute games per week during the season.

I hope that this hasn't been too boring. Just based on the rough analysis I have done here, I got sufficient exercise excluding organised sport to keep me very fit. Mind you, I wasn't exercising for the sake of exercise, just doing other things that I enjoyed. Organised sport was effectively an add-on. Herein lies the rub.

The world changes. The life style I had is no longer possible for most given current living styles and cultural and parental patterns. So a question: if we take out of the equation the free exercise that I enjoyed, can organised exercise and sport substitute for the loss? I suspect the answer is no.

I think that I will pause here to allow for comments. I had started to dig further, but I have simply run out of time.