On vanishing down rabbit holes - the case of Arthur Ransome 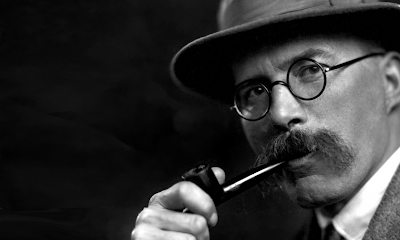 My family and friends laugh at me because of my ability to find connections between New England and apparently totally disconnected figures.

This is the English children's writer, Arthur Ransome. I really liked his books as a child. My favourite was We didn't mean to go to sea. It was a present from my parents.

Later, I tried to share Ransome with my children, buying Swallows and Amazons. It didn't grab. It was too remote.

Now what has all this to do with vanishing down rabbit holes? Well, I had an email from Cathie L asking me whether a certain homestead near Walcha still existed because it was once owned by Ransome's grandfather.  I had no idea that there was a Ransome connection. That was where the rabbit hole came in, for with info from Cathie I was off on a web search combined with emailing local historians.

I have a total new story, although I can't write about it yet because I need to clear it with Cathie. But it involves a Dutch battle field, a New England station that carried its name, a squatter and early Australian painter. With the Russian revolution and espionage thrown in.

The only problem is that none of this was on my writing agenda including this blog. Sigh! this is happening all the time now that I am back on the New England.
Posted by Jim Belshaw at 5:37 pm

Well that's weird. My children grew up with Swallows and Amazons, and my daughter's staunch oration at my wife's funeral was a passage from same. Her brothers cried, and I remembered the simple joy of introducing all three to small boat sailing.

Hi knd. That is weird. Obviously I had no idea of how important S&A were to you in a family sense. I teared up a bir. I re-read the book just before I cam up, although it's somewhere in a box now.

I am able to be quite precise about when I read the Ransome books. I received S&A as a prize at the end of year 3 (as we now call it). I obviously took to it as I my parents gave me the next 4 or 5 for Christmas shortly after and the balance for my 9th birthday the next April. I think they cost about $1.90 each (in the old Cape paperbacks with the dust-jackets as per the Wikipedia entries).

I'm not surprised you were unable to interest your daughters in them. The books were probably too remote in time. I wonder if I would have been so open to them without the background I had in other English middle-class children's literature.

I agree "We didn't mean to go to sea" is the best of the series - probably because it has the tightest plot with its own version of the "unities." It also entertains that reliable trope of children's fiction (and children's fantasies) of children having to get by without adults in an emergency. So reassuring after being thrown on their own devices by the rather transparent device of a lorry accident disposing of the first adult for their father to turn up from imperial ventures in the Far East to help them home.

On reflection, CS Lewis's Pevensie family must owe something to Ransome's Walker family.

i'm sorry for the slow response to your comment, marcellous. it was partly your fault, you sidetracked me! Now I'm watching Brendon Chase and will come back when that's finished!

I was struck by your comment on reliable tropes and the Pevensie Family. That reminded me of Brendon Chase by BB, a book I loved as a child. For a period I borrowed it multiple times out of the library. I ended up on a web search and found the TV series! When I first read the ransome books I was in the scouts. They seemed very adventurous!