In these days of social distancing, I find myself spending time just sitting at the outdoor table in the back paved area absorbing the sun. It's out of the wind and is a real sun trap.

Sitting, I look across the little backyard and then a paddock to Queen Elizabeth Drive, once known as the Mad Mile. This, then the main drag to the University, acquired its name because people used to pu the foot down. Armidale was much smaller then and it was really a country road.

Constable later Sergeant Montgomery, the city's only motor cycle policeman, used to spend time there waiting to catch the unwary. Monty, as he was known, was an institution especially among the young who had just acquired or were on the point of acquiring a license.

In those more relaxed days, you could acquire a full unrestricted drivers license at 16. There were no minimum hours. You just needed to pass your driving test. Most country kids had been driving from an early age. For townies like myself it was a little more difficult, but most got their license at 16 or 17.

The stories about Monty are legion, some may even be true!. A big man, he had the reported habit of falling off his bike, in so doing acquiring the nickname "Autumn Leaves".  He used to wait behind a particular billboard outside town to catch unwary highway travellers. We locals knew this habit and could take necessary avoiding action. Through travellers were not so lucky. 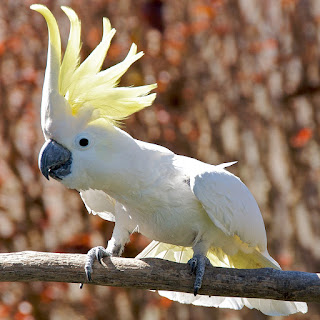 Monty was also a kind man. It's not easy being a policeman in a smallish community, for you are both a resident and an enforcer, different roles that can conflict. You need to temper the letter of the law with s degree of discretion and judgement, something that is more difficult now because procedures have become so rigid. In retrospect, Monty managed the balance pretty well.

I have mentioned the adjoining paddock before. The doings there continue to fascinate me. It's quite a big paddock by urban standards. The neighbours have a ride on mower. Since the rains came and the grass grew, they have been mowing regularly. A cacophony of sulphur crested cockatoos has gathered as a consequence.

I said a cacophony of cockatoos. The poets tell us that bird song is meant to be melodious and indeed it can be. But these birds squark! A friend looked up descriptions for them in a crowd. Choices include a clattering, a chattering or a cluttering. I prefer cacophony! 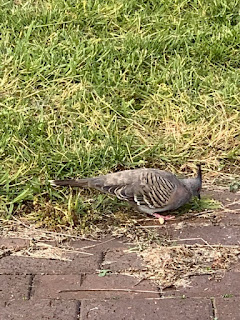 Not all birds are so noisy. A crested pigeon has taken up feeding in the backyard. I used to call them woodcocks in Sydney, but I am assured that the correct name is crested pigeon. There are a pair that sit on next door's TV areal., but its the male who comes to eat.

He was very cautious initially, but now he just ignores me, moving only if I make a sudden movement.

In the age of social distancing, we are all forced back to our social media connections. There is a real issue here. From my viewpoint social media has been a godsend, but then I'm involved actively in the on-line world. This is not true for many. Covid-19 has suddenly short circuited all previous discussions about the on-line world and the importance of decent internet access. Even the Armidale Regional Council has been caught,struggling with virtual council meetings because some councilors in country areas do not have access to dependable broadband.

One thing I noticed when I arrived in Armidale was the apparent absence of bees. Growing up here, there were lots of bees. I managed to get stung several times. I knew that bees had been in decline in bee numbers many areas, so wondered if the district had been affected. Note I didn't say impacted. The rise of that word has been one of my pet hates.

I have a confession to make here, on bees not the use of English. I have been thinking that I would like beehives. I know that it's silly in some ways. There is a fair bit of work involved. But still! 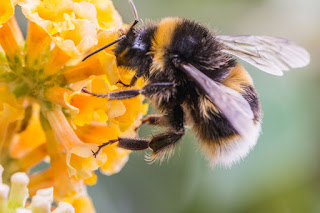 Ten days ago, the first bee arrived at the house. They must have known that I was looking for them! This morning as I sat outside another, the same?, cam buzzing around. I sat there and let it inspect my jumper. I don't know why my jumper should be attractive, but it seemed to be a subject of considerable interest.

Just at the moment, shopping has moved from a chore to a major excursion., a break! The stores are not crowded and toilet paper is back! In fact, most things are back including eggs and pasta.

I fear that my store trips involved detours. I know that this is naughty, As a male of a certain age, I should be staying home, not perambulating. The warnings are most fearsome, the police on guard. But still. 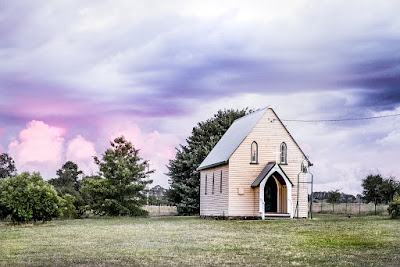 A number of nice lanes lie to the west of Armidale. You can drive down one road. swing to the left or right and then turn back to town. In all, the time involved is less than the standard metro shopping trip.

This is St Nicholas' Anglican church at Saumarez Ponds. It lies just to the west of Armidale. I can head west and then drive south and east to get to the shops.

Saumarez Ponds was a now vanished small farming community. I suppose that those communities are now coming back in a new guise with the spread of hobby farms outside Armidale. These began in the 1950s with the spread of those who wanted space for their chooks and horses. Some are just like large urban blocks, others have turned into mini-farms, some are outposts of the counter-culture community with mud brick homes and sprawling gardens. It's part of the richness of New England life.

It's time to finish. Next door neighbour Dave has just come with a load of wood for the lounge room fire. I do love living in the country.

Glad you sound so contented, JDB. Your neighbour Dave sounds like a treasure -you can repay him in kind in good veggie weather.
I remember we used to get warned about the cop behind the billboard @ residential schools. Same cop, or just a general cop hiding place?

- being an entry for a woman who kept detailed diaries for many years in colonial America. She was running 3 southern plantations at the age of 16 for her absent father, and one of her sons ended up being a signer of the Declaration of Independence. Experimented with many crops suitable for her area, and ended up establishing the indigo plant - accounting for 1/3rd of South Carolina export revenues at one stage. Pretty impressive.

Which got me wondering about early Australia, and any equivalent prolific female diarists of the period. Which lead me to:

- with mentions of Armidale, so I guess you'd be aware of this anyway, but also lead me to this pdf which I've downloaded for a browse:

- link at bottom of that web page for the pdf.

And I disagree most strenuously with your thought that this virus chappie has lead to increasing resort to the internet for any of us :)

Hi anon :) Monty was earlier, but practices remain the same. I am content.

Interesting as always, kvd. Eliza Lucas sounds quite a woman! Thank you for the link to Caroline's Diary. I knew of the book but have yet to get a copy and read it. She is quite a well know figure in Armidale because of the Saumarez connection. And I too have downloaded the pdf for a read.

Totally delighted to read a reference to Monty! The favourite Monty story in our household was as follows: a flash flood (referred to as a "fresh") came down a creek east of Armidale, and a vehicle became stuck in the flood waters. The occupants, being of some obscure evangelical persuasion, got out the bible and began to read passages from it.

They were rescued by Monty, who allegedly lost his false teeth in the effort.

I believe this story appeared in the Armidale Express.

I was myself an eye-witness to one of Monty's bike accidents. It happened at the intersection of Taylor and Beardy Streets. The gutters were much deeper then, and his bike turned over in the gutter on the north-west side. At the time I was playing in the gutter on the south-east side, which had an interesting culvert that was too big for me but the right size for my cat.

I was out there waiting for my parents to come home for lunch. My father was the sub-editor of the Armidale Express and my mother was the proof-reader.

As a life-long Armidalian at heart (despite the fact I'm based in Canada) I treasure your blog. Thank you!

Hi Gayla and thank! Interesting additional stories on Monty. I remember those old gutters from the time when only the centre of the roads were sealed. As children, we used to collect clay from Mossman Street outside the house to make rather bad pots! The memories that come back!

I am glad that you retain your emotional links to Armidale in spite of all that distance in space and time!