Another view of China - and the importance of shifting perspectives 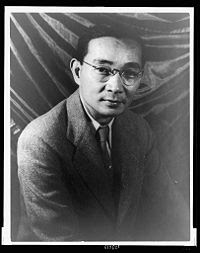 Photo: Lin Yutang, a Chinese writer who played a major role in first introducing China to the West.

My thanks to Marcellous for his post, Olympics - a different view from Beijing or just outside it. It contains a link to a rather good article by Peter Hessler in the New Yorker, an article that I greatly enjoyed.

I feel a little hesitant in writing my current series on my reactions to China because others know so much more than me. Yes, I do know something about Chinese history. Yes, I have met a substantial number of Chinese people. Yes, I have even dealt to a minor degree with the Chinese at official national level. Here both my wife and I, to the somewhat bemusement of our Chinese host, became quite excited when we saw the CATIC building in Beijing simply because CATIC was one element in our shared past. But, compared to others, my knowledge is very limited.

In writing, I am trying to apply both my skills as an analyst and to use the experience to order my own ideas and perceptions - a learning experience.

In Beijing in the early morning I was musing about a post simply called China and Shifting Perspectives. I think of this at two levels. The first is the way in which exposure to a different culture causes shifts in the way I think about my own. The second is the way in which direct exposure to another culture enhances my understanding of that culture.

There is something of a modern urban myth that Australians of the past did not have contact with or interest in the Chinese. This may have been true at a general level, indeed it may well be true today, but was not universally true.

In some of my writing I have tried to discuss Australia's changing perceptions of the world outside Australia. Here I have suggested (among other things) that in some ways we were more aware of that external world than modern Australians simply because we were a much smaller country, a European enclave on the edge of Asia.

At one level this translated into racially based concerns, fear of the yellow peril. But at a second level, it was also reflected in an interest in the depth and complexity of Chinese history and culture, especially among Australia's educated cultural, academic and political elites.

We can see this duality in the work of Mary Grant Bruce, a very popular author of Australian children's books. Here I quote from the Wikipedia article:

Some of Bruce's earlier works are considered to have had offensive and dated content, particularly in regards to racial stereotypes of Australian Aborigines and Chinese and Irish immigrants, and her earlier belief in the theory of Social Darwinism. More recent reprints of the Billabong series have been edited to remove controversial material.

We are far too precious and sensitive in modern Australia in dealing with past views. The Chinese market gardener on Billabong represents the Chinese stereotype the article is talking about. On the other hand, the end of another book in the series - the story of the rescue of a kidnapped Chinese boy and his return to his family - very explicitly draws out the contrast between the simple popular stereotype of the Chinese and the high sophistication of the Chinese gentleman that the Billabong couple are allowed to meet because of the rescue.

I first read Lin Yutang, I think the greatest 20th century populariser of Chinese culture, in my early twenties. Why? Well, partly because the books were there on the shelves of both my grandfather and father. These were very popular books. But also because I wanted to learn more about China.

So despite my own self-doubts about the value of my observations on China, I will continue the series. In doing so, I want to educate myself, but also draw out some of the lessons as I see them for Australia from the experience.

Let me take an example.

The Colombo Plan is one of the most successful foreign policy initiatives that this country has ever been involved in. A country with a racially based immigration policy still in place, took in huge numbers of overseas, especially Asian, students. This changed Australia. But it also created enormous good will among students that we welcomed.

In somewhat similar vein, the long involvement of Australia's military forces in Aceh seems to have caused a shift in local attitudes towards Australia. In both the Colombo Plan and Aceh we were making a practical contribution.

Today we have a huge number of Asian and especially Chinese full fee paying students in Australia. This is a straight service for cash deal. We are making money, but we are also ignoring the long term implications.

Unlike the Colombo Plan period when overseas students were welcomed and integrated into the broader student body for great mutual benefit, our modern commercial approach locks students into ghettos. They do not learn about Australia, nor do they establish links. They see Australia in very narrow ways.

We will pay for this.

I wonder about some aspects of the Colombo Plan and whether you are being just a bit nostalgic, as another aspect of it was that students were definitely made aware they were not welcome to stay; the singer Kamahl was a rare exception. This is not to say I don't broadly agree with you. (We had a few CP students at school in my final two years, and I met more at university, one of whom was the first person I ever heard using the word "colonialism" as a negative concept! I was shocked at the time.)

On the other hand, while there is much about our overseas student industry I do deplore -- some language colleges and schools programs are very dodgy and support services often inadequate -- much depends on the students about whether or not they seek out a broader Australian experience. Many do. M, for example, arrived as a language college student in December 1989, a significant time to arrive of course. The Japanese backpacker I befriended in 1998 came with the express purpose of not fraternising with other Japanese. I could cite person after person I have met who have sought out Australian experience while they are here.

I guess we could make an analogy with Australians overseas. Some remain determined expats, seeking Aussie company and Vegemite, while others "go native".

I continue to find these posts interesting, Jim. Such a contrast to my recent documenting of Surry Hills. :)

I also read Lin Yutang, by the way, but after I became interested in Chinese culture. His work is still delightful, but not well known in China; he was on the "wrong side" after all. M now has my Lin Yutang books.

Neil, I accept the nostalgia point. These students were my introduction to very differnt cultures.

Still, and cutting straight to the chase.

The Columbo Plan students may have come in knowing they they could not stay, some met racism, but all met Australians and especially but not exclusively Australian students. Speaking only of Armidale, there were many programs to welcome them to Australia.

The problem now, and this is based only on my experiences in Sydney, is that the numbers are so high that they largely mix with each other. They do not see Australia.

I would argue, I think, that there needs to be special programs to give them access to Australia. Yes, some do try to mix, but based on my current observations this seems very limited.

I enjoyed your documentation of Surrey Hills, and will pick it up in due course, because it was so locally Australian.