Visiting China 4 - out with the old, in with the new 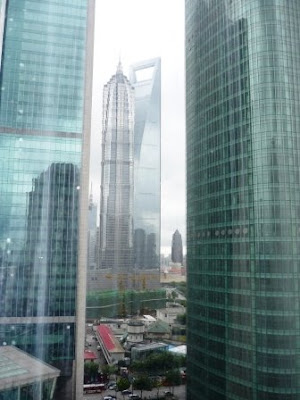 This photo shows the view from our hotel room in Shanghai, a view that captures a key element in modern Shanghai.

The building in the centre left is the 88 story Jin Mao tower, previously the tallest building in Shanghai. Just beside it is the new 101 story tallest tower; this opened while we were there.

Both Shanghai and Beijing are in the process of tearing themselves down and rebuilding. The results are impressive, but come at a cost.

As one does, at Beijing Airport's smoking room I got chatting to a Chinese bloke while we shared a last minute smoke. He left Shanghai in 1989, returning after many years. He mourned the increasing destruction of the old city.

I knew how he felt. I first visited Singapore when I was twenty, a very impressionable age. After the order of New England I was greatly struck by the buildings and chaos of old Singapore. When I went back many years later, all this had gone. I found modern Singapore very boring, just another modern city.

In Australia, Sydney tore itself down in throws of reinvention, Melbourne preserved its structure. Now Sydney is just another modern city saved to some degree by its harbour, while Melbourne is reinventing itself as a life style capital.

If I had a single piece of advice to the city authorities in Shanghai or Beijing it would be this. In your desire for modernisation, preserve your past. Once gone, you won't get it back.

Singapore can be very seductive, except that it is so antiseptic!

It's just too controlled for me, RM, as well as too antiseptic! There are now very close links and especially economic links between Australia and Singapore.

I must revisit this sometime. I really haven't focused on Singapore for a while.

Nice blog.... keep-up the good work... May I share a blog about Huangdao Illumnation of Buildings in https://stenote.blogspot.com/2018/07/huangdao-illumination-of-buildings.html
Watch also the video in youtube https://youtu.be/GcfqJ6JUrNY