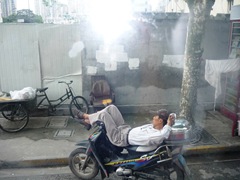 Photo: Midday snooze, Shanghai. I took this photo from the bus window, hence the reflected light, because I thought it a rather nice streetscape.

As I have said before, so little time, so much to write about.  Writing these blogs is like a huge adult education program, forcing me to study and keep in touch in a way that my university lecturers could never manage!

Just before I went to China, I saw a copy of Voice of the land, the magazine of the Federation for Aboriginal and Torres Strait Islander Languages. I had not seen this before, nor had I heard of the Federation, so I was obviously interested.

The particular issue that I saw was very top end focused, so did a search to see what I could find on New England languages. This led me to Kevin Lowe's The Need for Community Consultation to assist in the Development of Aboriginal Language Programs in schools:  A Draft Discussion Paper. At the time of writing Mr Lowe was Chief Education Officer with the Aboriginal Curriculum Unit, Office of the Board of Studies NSW.

Alienated, I did not read the full paper, giving up half way in. This, I thought, was the type of writing that ensures that indigenous policy and indeed attitudes towards and about Australia's indigenous people will remain locked in a particular intellectual ghetto.

If, as Mr Lowe appeared to suggest at one point, the close links between language and indigenous culture mean that intellectual property protection should apply to individual languages and that words from it should only be used with the approval of the owners, then I as a non-indigenous Australian have no place.

Just before I went to China, Gordon Smith kindly sent me a link to a new book on the way in which court room talk could disadvantage Aboriginal witnesses. He knew that I would be interested both in the topic and the fact that the book was published by a University of New England academic. Again, the language lost me. I quote:

Dr Diana Eades said her study – the first of its kind – examined “the ways in which courtroom talk is used to legitimise the overpolicing of Aboriginal people and to continue the neocolonial relationship of control over them”.

I struggle with concepts such as neo or post colonialism. Originally popularised by the academic left, they have become quite pervasive. As an example, they litter some of eldest's current university courses. To me, they say much about the attitudes of those using them and have become a barrier to understanding. I actually hesitate about helping eldest even where I know the topic very well because I do not use the right jargon or interpretive concepts. Perhaps the only plus I can see in Mr Mugabe is that his constant usage of these type of concepts to justify his position is actually discrediting the whole language!

This has become too sour for a Sunday morning. On a more useful note, the ABS has released estimates of the indigenous population as at 30 June 2006. Because I use these numbers, I thought that I should record them in table form.

Still on statistics, if very briefly, the ABS continues to release useful data. I have actually printed some of this off because I want to update and consolidate my general Australian demographic material. This will allow me to test, refine and update some of my analysis.

A little later. Just back from taking Helen to the airport. She is flying to Melbourne for the university games where she and a friend are playing in the mixed netball. Boy did I feel envious! Helen also won the award as the most valuable player for her netball team. Yes,I am a proud father.

At dinner last night for my mother-in-law's birthday, my wife's sister who is just back from a period as a doctor on a cruise ship showed her own recent Shanghai photos. Gee they were good. Quite put ours to shame. She stayed in another part of the city and got a lot of shots of the older parts of Shanghai, parts that we did not see.

Enough. I am beginning to meander and have to go shopping for the obligatory Sunday family roast chook.We are having this at lunchtime because Clare is working tonight.

As an aside, we did get asked about Australian food in China. But that's another story.

I stumbled across your blog and saw that you have a budding interest in Indigenous languages. You might like to check out my blog or say gday. It's an area I find myself quite entrenched in.