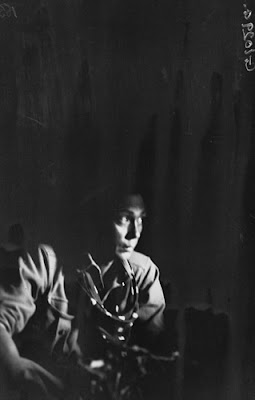 A little while ago I ran a post, Did you board at St John's Hostel Armidale?. This included a photo of 1937 boarders, one of whom was Harry Freame from Kentucky.

Kentucky was an orcharding and soldier settlement community south of Uralla, about twenty four miles from Armidale.

Looking again at the photograph reminded me that I had not yet told the remarkable story of Harry Freame.

Like any self respecting adventurer, elements of Harry Freame's life are shrouded in mystery, a mystery I suspect he sometimes played to with considerable effect.

When Harry Freame enlisted in the AIF on 28 August 1914 he described himself as a horse-breaker of Glen Innes and gave his birth place as Kitscoty, Alberta, Canada. With his dark complexion and accent, many thought him to be of Eskimo extraction, some thought American Indian, others maybe Mexican, an image he played up to "at Anzac where, in cowboy fashion, he carried two revolvers in holsters on his belt, another in a holster under his armpit and a bowie knife in his boot pocket."(1)

Wykeham Henry Koba Freame was in fact born at Osaka, Japan, son of Henry Freame, sometime teacher of English at the Kai-sei Gakko in Japan, and a Japanese woman, Shizu, née Kitagawa.

The date of his birth is uncertain. James Courtney suggests 28 February 1885 with a question mark(2), Darryl Kelly 1880.(3) This difference is not insignificant because it bears upon the accuracy of some of the stories about Harry Freame's early life. Could he in fact fitted have them all in? My feeling is the earlier date may well be correct.

Harry Freame almost certainly initially grew up in Japan, speaking Japanese like a native born. Darryl Kelly records that he was sent to England at the age of 15 (1895, 1900) to further his education. (4)

This early part of Harry Freame's life is shrouded in mystery. We know that on 19 July 2006 he married Edith May Soppitt at St John's Anglican Church, Middleborough in England, occupation merchant seaman. (5) At that stage his age was somewhere between 21 (1885 birth) and 26 (1880 birth). We also know that he had already started as an adventurer and mercenary.

Both Darryl Kelly and James Courtney refer to two campaigns.

The first is given by both as German East Africa. James Courtney suggests that he was involved in the supression of the Hottentot rising 1904 to 1906 (6), while Darryl Kelly records that Freame told friends that he served in 1904 as part of an international band of mercenaries hired to help suppress a native revolt.(7)

I think that both have the colony wrong. There was a rebellion in German East Africa (now Burundi, Rwanda and Tanganyika, the mainland part of present Tanzania), but this started in the middle of 1905.(8) By contrast, in German South West Africa (now Namibia), a serious and very bloody Hottentot rising did begin in 1904, continuing until it was crushed with considerable brutality in 1907. (9) So I think it likely that Harry Freame served as a scout in South West Africa between 1904 and 1906. This would also be consistent with the date of his marriage.

The second campaign on the other side of the world is the Mexican Wars where he is reported as working as an intelligence officer for President Porfirio Diaz. (10).

Darryl Kelly records that Harry Freame was in Mexico twice, returning in 1910. In 1910, a major rebellion broke out against Diaz's autocratic rule, starting the Mexican Revolution.(12) With the collapse of the Diaz Government in 1911 and a price on his head, Harry Freame fled Mexico by pack horse, escaping to Australia via Chile.(13)

We do not know what Harry Freame did between his arrival in Australia and his enlistment in 1914. However, by 1914 he seems to have been established as a horsebreaker at Glen Innes on the northern portion of the New England Tablelands.

Darryl Kelly describes Freame's initial impact on the AIF in this way:

With the final honing of skills in Egypt, Harry's skill and knowledge of previous campaigns began to surface. The swashbuckling air of confidence (of) what would soon become an ANZAC legend was about to take shape. The first item to be modified was the uniform. On this he attached leather pads on elbows, knees and insides of ankles. This allowed for the easy movement when leopard crawling around "no mans land". Next he discarded the standard .303 rifle and opted for a pair of pistols, worn on the hips, these were ideal for the close in combat of a scout. A stout bowie knife was positioned, sheathed in a boot scabbard. The last weapon in his armoury was a small pistol, worn in a shoulder holster, under his shirt. To top it off, Harry's trademark, black and white bandanna (photo) was worn around his neck. (14)

I am not quite sure that the AIF knew what had hit them. Harry Freame's bravery and his skill as a scout quickly became legendary. His uncanny sense of direction, his capacity to wriggle like an eel deep into no man's land at night even into enemy trenches, made him a formidable enemy.

Landing at Anzac on 25 April, he was promoted sergeant after three days of heavy fighting. He was awarded one of the A.I.F.'s first Distinguished Conduct Medals for 'displaying the utmost gallantry in taking water to the firing-line although twice hit by snipers'. He was mentioned in dispatches for his work at Monash Valley in June when C. E. W. Bean described him as 'probably the most trusted scout at Anzac'.(15)

On 15 August he was wounded at the Battle of Lone Pine. Invalided to Australia, he was discharged as medically unfit in November 1916.(16) A little later, he settled on the Kentucky Estate as government storekeeper following its subdivision as a soldier settlement scheme, then acquiring a block and establishing an orchard.

At the end of the war Edith, his arguably long suffering wife, came to join him. The historical material has almost nothing on his family. There was at least one son, the Harry who appears in the St John's Hostel photo. I am only guessing, but Harry must have been born after Edith's arrival. If he was fifteen or sixteen in 1937, then that puts his date of birth at 1921 or 1922.

I wonder how Harry Freame adapted to Kentucky? For those who do not know the area, the quiet dirt roads flanked by pine trees, the orchards, the sound of the crows in in the air, is far removed from the world that Harry Freame had known. Perhaps he found it healing. I also suspect that it made him restless.

Now we need to enter an apparent sidetrack, one that I am working partly from memory without checking my sources. Later I may add references if I get time.

In my post Ethnicity, ideology and the sometimes slippery concept of Australian "independence" - Part One: "Independence", I spoke of the evolution of Australian independence. I also mentioned the role that Billie Hughes had played at the end of the First World War for both better and especially worse. One of my points in the post was that the simple us (Australia)/them (London) model that seemed to be so popular today acted to conceal the reality and complexity of the Australian position.

The complexity of the Australia-Japan relationship in the period leading up to the Second World War is an example.

The adoption of the White Australia policy, in some ways the new Federation's first foreign policy act, created real problems with Japan and also for the Imperial Government wishing to maintain good relations with the Japanese Empire for broader strategic reasons. This included the signing of the Anglo-Japanese alliance in 1902. These Imperial imperatives actually led to some modifications of the policy, exemptions allowing for some types of Japanese entry.

Then during the First World War, Japan played a critical role in keeping shipping lanes open to Australia. There was disappointment on the Japanese side when Hughes at the subsequent peace conference fought to limit Japanese manadates over former German colonies in the Pacific. One can argue that he was right in the case of New Guinea, a Japanese New Guinea would certainly have complicated things later, but scarring was there.

By the early 1930s, Japan was central to Australian life in a way that I, for one, had not realised. Japanese trading companies played a major role in Australian trade, while there were tens of thousands of Japanese living in Australia under various forms of entry arrangements.

From 1931 Japan began to move into China. This further complicated things. Concerns about Japanese expansion warred with economic interests (Australians were seeking opportunities for economic expansion) and a love of things Japanese.

In 1935, William Scott joined Australian military intelligence.(17). A lover of things Japanese, Scott was also concerned about the Japanese presence.

In 1939 on the outbreak of the war in Europe, Harry Freame offered his services to the Government. His wife had died, that year, and I think that he was restless.

Scott employed Harry Freame to infiltrate the Japanese community in Sydney, and represented military intelligence at a conference in September called to iron out differences between military and civilian intelligence. In August 1940, Harry Freame married again, Harriet Briadwood. A month later, Freame accepted an appointment to the Australian Legation in Tokyo as "interpreter".

There is a whole story here that I do not fully understand.

Australian espionage in Japan, yes we did have our own spies, had been centered in the Australian Trade Commission. The establishment of the Australian Legation, one if not the first independent Australian diplomatic posts outside the Empire itself, was intended to extend Australian reach and to protect our economic and political interests in Japan.

The story of the Legation itself is one thing that I do not understand. The second is the fate of Harry Freame.

Harry Freame must have arrived in Tokyo in September or October 1940. In early April 1941 Freame, almost unable to speak, was reptatriated to Australia, dieing in agony on 27 May. The death certificate said cancer, but Freame himself said that he had been garrotted by Japanese Military Intelligence because of a leak in Australia that revealed that he had been employed by Military Intelligence. Medical records affirmed that his throat condition was not inconsistent with strangulation.(18)

There are two further postcripts that add to the sadness of the story.

The first is Australia's treatment of its large Japanese community during and then at the end of the war when we simply classified them as "seamen", a legal fiction allowing mass deportation. The second is the fate of Harry Freame junior.

In May 1942, Lieutenant Harry Freame Jr serving with the 2/24th Battalion 9th Division lead an assault on a Japanese underground bunker position near the Tarakan airfield using flamethrowers and grenades. Freame was wounded and hospitalised. A few nights later he was killed when a Japanese infiltrator threw a fused shell into his hospital ward. (19) I do not know whether there were any more family members.

Thanks, a very interesting story and as you say certainly a welcome respite from reading about current NSW (or federal for that matter) politics.

Dispiriting, isn't it? On biography, Freame and Frewen stand out because of the way their lives interconnect with broader issues.I am now wondering who next - it needs to be someone who is interesting, but who also has enough material about them on-line to tell a story.