Technorati and Ninglun's influence in our blogging world 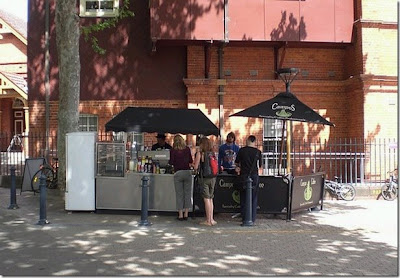 Ninglun (Neil Whitfield) continues the constant experimentation that makes his blogs so influential in our immediate blogging world.

I have chosen this photo by Neil to illustrate this story because this is in fact the bus stop I get off at when travelling to Central Railway station.

The photo comes from Neil's rejigged Ninglun’s Specials. There, unleashed on the world with a new digital camera, Neil has been reproducing shots of his immediate neighbourhood.

While I have suggested that Sydney has lost some of its identity as compared to Melbourne, the ring of inner suburbs round the central city retains a unique character. Neil's photos bring this out, focusing especially on the former working class suburbs of Surry Hills and Redfern.

My own equivalent blog sparked by Neil's earlier photo forays on one of his now extinct blogs has yet to gain proper form. For that reason I have not really commented on it, nor is it listed yet on the side-bar. I prefer to keep it somewhat hidden until it does take form or, alternatively, gets killed.

As a further sign of Neil's influence, I too have taken to carrying a digital camera with me when I can (it actually belongs to Clare) trying to capture shots that I can use to illustrate stories.

All photographers, especially bad ones like me!, have to watch that their use of photos does not become disconnected and boring - the equivalent of an on-line slide show of the old this is us in front of the pyramids type! The advantage of Neil's focused approach, the same thing applies to Gordon Smith's photo blog, is the way it aids coherence.

Neil's second current initiative is his Shared Items, using Google Reader to make available a number of posts from various blogs on an on-going basis. I do not intend to copy this one, I do not have the time among other things, but I have already found it quite invaluable. There are some really good posts out there. It's actually a bit depressing when I compare some of them to my own efforts. Still, part of the point in comparisons is to provide a drive to improve one's own performance.

In response to a comment from Thomas on my post Technorati - State of the Blogosphere 2008 I promised to provide some analysis of the Technorati study to provoke cross-blog conversation once all the Technorati posts were up.

To ease what appears to be Thomas's current melancholy, Neil's blogs exhibit a number of features that place them at the upper end of the blogging world as measured by Technorati.

To begin with, Neil is by blogging standards a very long-standing blogger. This appears to be a feature of all the leading bloggers - you gain traction with time. Then, too, he posts on a regular basis, usually more than once a day. With exceptions, leading bloggers post up to four times a day; people come back often to see what is new.

Leading bloggers experiment with new technology and are at the leading adaptive edge (tick) and use a variety of techniques to attract traffic to their blogs (tick). They also involve a fair bit of time (tick, tick, tick!).

Where to my mind the Technorati study is weak, almost inevitably so because of its global macro focus, lies in its failure to adequately address the creation of community. There is material on this, but it does not really address the type of roles that blogs such as Neil's play.

Community is not about tools such as Twitter, that's another post in its own right, but about the way in which interaction over time creates the village in the centre of what would otherwise be an amorphous mass. Blogs like Neil's are especially important because they are critical to the sense of community.

To illustrate what I mean, consider the number of blogs we all follow. I have more than one hundred on my watch list, and yet that's just a tiny insignificant percentage of the total number of blogs. So we all have to choose.

In this context, there are a number of blogs and bloggers that I know through Neil, and who know of me through Neil, that are not on my immediate watch list. Here I rely on Neil to keep me in touch, alerting me as required when posts come up that I should read. So Neil becomes a centre of gossip for the extended village, part of the glue that holds things together.

I actually think that the thanks are on my side, Neil.

I've tried a few times to write a response to your post on my blog Jim, but i always get sidetracked with things that come up and have nothing to do with the topic haha! I'll get something up sooner or later - probably later.