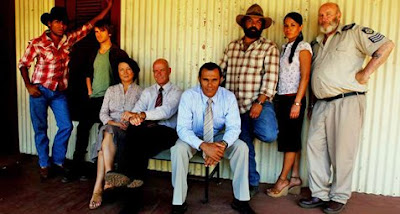 Thursday night before going away I got to watch part of an episode of the The Circuit, a court room drama set in WA's Kimberley region.

Helen was fascinated, she had not seen it before. Then we had to turn it off after Clare came home from hockey training because she wanted to watch a birthday present DVD and it was her birthday.

The program reminded me just how complex Australian society has become in ways that many of us barely perceive. In saying complex I am not talking about the complexity of current life, we share that with many other countries, but the complexity of society itself.

Helen found The Circuit episode fascinating because it exposed her to some of the complexities of an area and of the Aboriginal people in that area, bringing alive some of the things that she had read about or heard on TV. She also found a problem in reconciling the simple black/white images presented in the eastern states' media with the sheer complexity of the on-ground problems shown in The Circuit.

Australia could not and will not survive without common patterns and understandings. Yet we should not under-estimate the difficulties involved in maintaining national coherence. A key need, at least as I see it, is the need to recognise and accept difference. If we ignore or, worse, suppress these, we will all suffer.

The starting point in managing difference is not an un-thinking imposition of uniformity or rejection of alternative views. The starting point is to understand and delineate the points of difference, the underlying principles, so that we can address the issues. Without this, Australia will move from global success to global failure as a nation.

Pretty obviously I wrote this short post in advance of my departure. It has been interesting watching economic developments - the only English language TV we have is BBC World, CNN. This means little on Australia, but constant economic coverage. Very frustrating for a blogger with my interests not to be comment!