The floods I mentioned earlier in the week in Droughts and flooding rains roll-on. There is now discussion 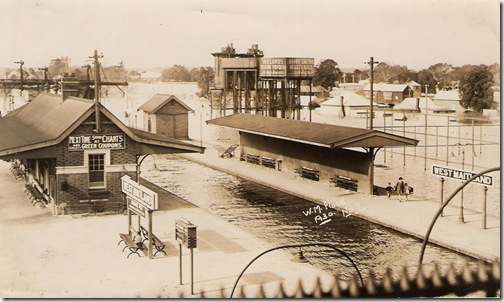 about the possibility of a repeat of the 1955 floods in part of Eastern Australia.

This photo shows the West Maitland (now Maitland) railway station during a still earlier flood, that of 1930. The 1955 floods were larger.

The very big floods occur when, as now, you get further rain when soil is already moist.

On 5 January, the Australian Bureau of Meteorology released the 2010 annual climate statement. The Australian mean rainfall total for 2010 was 690 mm, well above the long-term average of 465 mm. As a result, 2010 was Australia’s wettest year since 2000 and the third-wettest year on record since recording commenced in 1900. 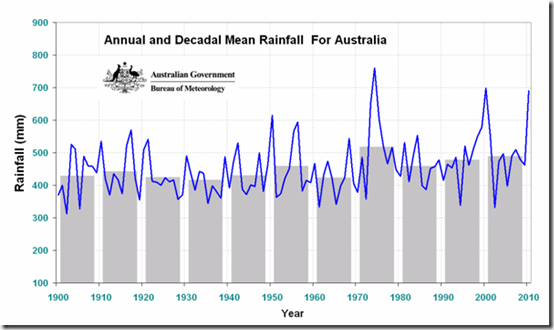 The chart shows Australia wide figures since 1900. If you look at the blue line, you can see just how much rainfall fluctuates.

These are national figures. Australia is a very big country, so you get considerable variations across the country. 2010 was the wettest year on record for the Murray-Darling basin, yet the driest on record for South West Western Australia.

Water held in the Murray-Darling storages has increased from 26% at the start of 2010 to 80% at the start of 2011. Many of the inland dams were built in part for flood mitigation purposes. This has reduced the incidence of big flood events. However, once dams fill, then further rain goes straight to the rivers.

The following chart shows the Bureau of Meteorology latest national rainfall outlook released on 17 December. It suggests that both New England and southern Queensland have a high probability of above average rain.

Australian PM Julia Gillard argues that the current wet conditions should not prevent discussion or action on Murray-Darling water allocations. I think that she is correct.

During the long drought, I argued that some of the reactions to the drought in the big metropolitan centres in the east were plain silly.

Now that the flooding rains have arrived in many parts of the country, I suspect that the risk lies in the opposite direction. Just because we now have water does not mean that problems associated with the weather cycle, with conflicts over water use and with climate change have gone away. I think that a bit more analysis, a bit less rhetoric, would benefit us all!