I spent a fair bit of time writing about Delos because the island sits at the centre of so much Greek history. The Delos posts were:

Delos will appear again later, but I am going to leave the story of the Peloponnesian Wars until the Athens stage of this ever extending saga.

On our return from Delos we had a picnic lunch in our room and then a rest. We then wandered downtown to have dinner at Antonini's, apparently a Mykonos institution, near the water front. 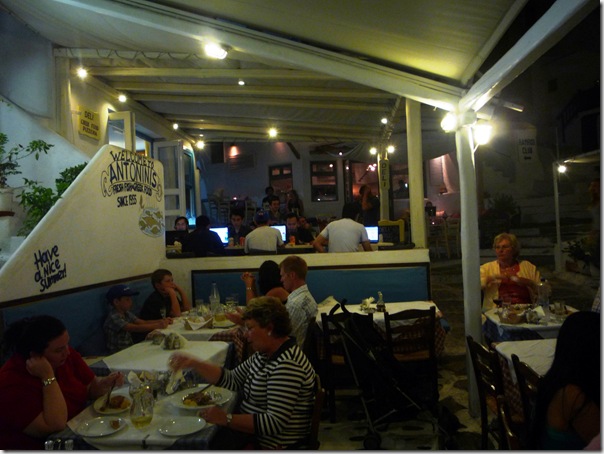 I enjoyed this meal, although by now I was getting very sick of Greek food. I just didn't think that it was very good.

I am probably not being fair when I say this. I know that I get very sick of Australian food if just eating Australian restaurants. I will go further than this. I think that the a 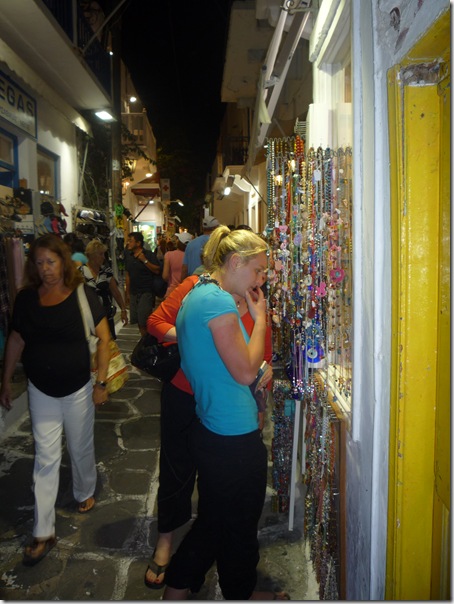 verage standard of Sydney restaurant is actually quite poor, worse than it was a few years ago in terms of both quality and value for money. However, that's a matter for another post.

On the way to and from the restaurant the women did what they like best, window shopping!

This was quite fun, because it gave me a chance to observe. As in other places, I found a perch and then just sat, watched and listened.

Mykonos was, I think, the first Greek island to be really discovered by the rich and famous of Europe and North America.

In some ways it's a bit like a faded tart, surrounded by memorabilia and still living off its memories of past glories. Not, as with other Greek islands, its long history, but rather that period when the famous or sometimes infamous came.

This may sound jaundiced. We all enjoyed Mykonos, but also felt that it didn't measure up to the other places we had seen. We would have preferred less time there, more time elsewhere. Still, I did enjoy watching both locals and especially our fellow tourists. I kept on forgetting to take my note pad with me!

One of the most fun things about Mykonos was the way it gave texture to Wog Boys 2, the Kings of Mykenos. 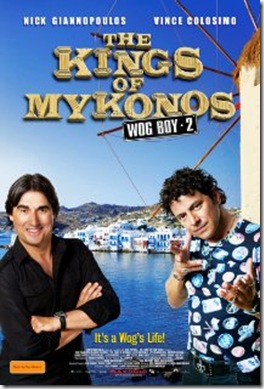 This is a very Australian movie that capture elements of Australian perceptions of themselves in a way that directly links to past movies including The Adventures of Barry McKenzie (1972).

Australian popular culture is quite complicated. The term wog could mean an illness, but was also applied in a pejorative way to migrants, especially from Southern Europe. Because it is pejorative, it shouldn't be used. To do so appears racist.

But what do you do when the groups to whom the term is applied adopt the term and turn it into a descriptor they use about themselves, one with positive and affectionate connotations?

I have a friend from an Armenian background who calls himself an Armenian wog. But I can't call him a wog outside narrowly defined circumstances because I am not a wog!

One of the most fascinating thing about the Kings of Mykonos is the way it takes so many Australian stereotypes and wraps them up in a Greek context with Greek subtitles. I don't think that the movie is great cinema, far from it. However, we just had fun watching it and fitting in the Mykonos scenes. 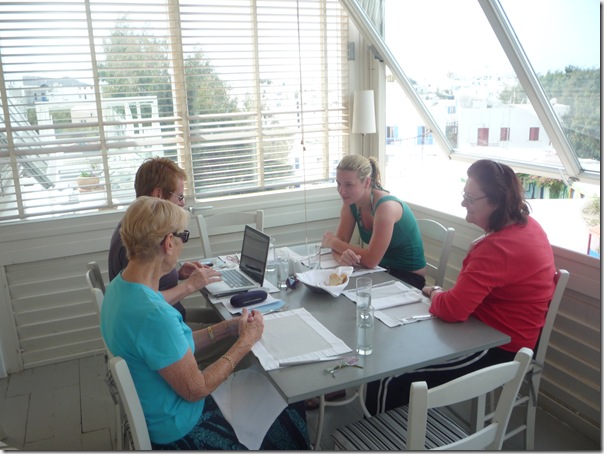 The changes that have taken place in travel as a consequence of the computer and the internet are quite profound and not always good. They make certain aspects of life easier, others more difficult.

From a purely personal perspective, one of the advantages of past travel lay in the way that you could put your normal life behind you. In a funny way, the privacy and sense of freedom that used to be associated with travel has been destroyed. The place that you are in becomes more an extension of your normal life, less a unique place on its own.

Day 12 was Judith's birthday. She wanted to have lunch at the hotel as a celebration. We did this and then walked downtown in the heat to look at the town. 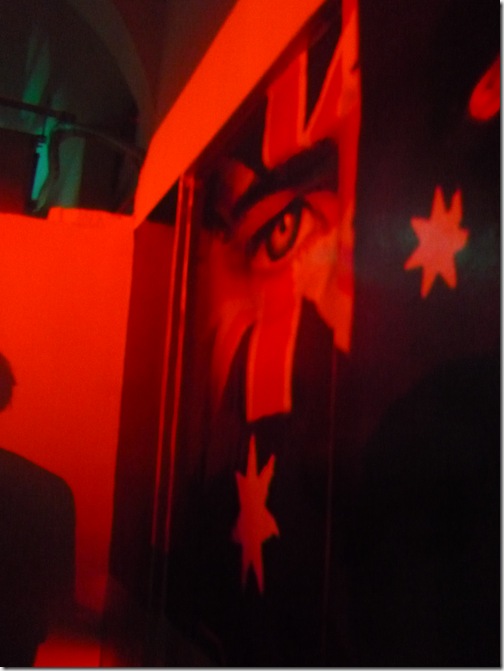 When we first arrived we found the old town with its twisting narrow streets very confusing. By now we knew our way around; just down the hill, turn left, turn right, then straight ahead.

This was, I think, the day that Clare decided to go clubbing after dinner. Like many of the Greek islands, the number of younger Australians mean that particular nightspots adopt an Australian flavour. There were two such spots in Mykonos. Clare visited both!

She clearly had a very good time! However, I did wonder next morning whether she had experienced another feature of Mykonos featured in the guide books, cheap shots. These, the guide books warn, are often adulterated to get the alcohol content up, the price down. Be wary, the books say, or you will end up with the mother and father of all hang-overs!

"one of the advantages of past travel lay in the way that you could put your normal life behind you. In a funny way, the privacy and sense of freedom that used to be associated with travel has been destroyed. The place that you are in becomes more an extension of your normal life, less a unique place on its own."

Jim, this is a very acute observation for travel in the past few decages. But it also puts me in mind of those old African adventure movies, wherein the camp was set up each night, complete with silver service and cigars. So maybe it's not such a new thing to carry with you your home comforts?

Great blog. Congratulation admin. Mykonos is one of the most famous island in Cyclades, Greece. But Corfu is the Queen!