One of Australia's best known poems, Dorothea Mackellar's (1885-1968) My Country says in part: 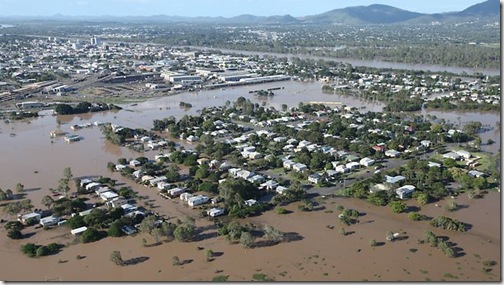 That is certainly what we are experiencing at the present time.

This photo from the Courier Mail shows the central Queensland city of Rockhampton, population 75,000. Flood levels have yet to peak here, although the city is already completely isolated by the waters.

It is difficult to comprehend the scale of these floods. However, to give international readers a feel for scale, the area now affected by flooding is much greater than that of the UK plus Ireland combined.

Unlike Pakistan and its floods, Australia is thinly populated outside the coastal hugging capital cities. Even so, more than 200,000 people have now been affected.

Coming on top of earlier floods, the damage to the Australian economy will be significant.

Coal mines and coal lines have been affected, with Queensland coal companies declaring force majeure on export contracts. Food crops have been affected; food prices will rise. Government revenues are down, while costs are up. The total cost to the economy is likely to be around one percent of GDP.

Ten people have died so far. Again, this is very small by the standards of the Pakistan floods. But it's still significant by Australian standards.

As the rains come, the thirsty ground absorbs the moisture. The biggest floods come when the ground is finally moist, storage's full. Then, suddenly, all the water runs into the rivers. For months afterwards, floods come under hot, blue, skies. The heat haze shimmers, even as water rolls over the land.

Most modern Australians are now remote from the Australian land. They live in hermetically sealed urban environments linked more to the rest of the world than to the realities of their own country.

To my mind, it's not a bad thing that they should sometimes be reminded of the real realities of their country.

Jim, your talk about the thirsty ground - I still remember flying into Moree to visit a client, and dinner that night in his beautiful old homestead - with 2 inch cracks in the stone block walls.

He explained that "you don't fill them up, because next rains, they'll close up, disappear" - or something like that.

And thank you for that lovely post on Learmonth - "I build a cairn of words" - just wonderful!

I'm glad you liked the Learmonth post, KVD. I had you in mind when I wrote it!