Just last Friday in Australia's wet spell I reported that some people were asking if we were about to see a repeat of the 1955 floods. This was actually a New Englan 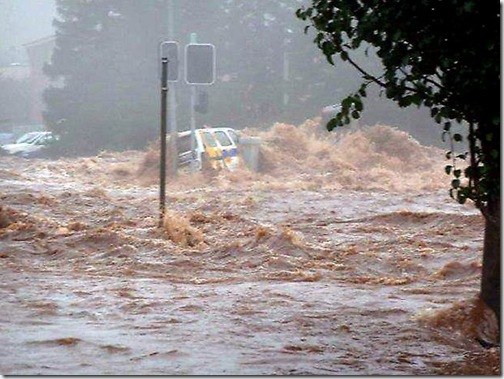 d or Northern NSW reference. So far as South Eastern Queensland is concerned, the overall floods are now the worst on record.

The rain and flood affected area is huge, stretching from Rockhampton in Central Queensland more than a 1,000 kilometres south to the Bellinger River Valley in Northern New South Wales, with flooding so far mainly concentrated in Queensland.

Part of the problem for the authorities is that there has been flood event after flood event.

Yesterday, a two metre high wall of water swept though the CBD of the Darling Downs city of Toowoomba.Toowoomba sits atop the Great Dividing Range.  The flash flood lasted ten minutes. The first shot from the Courier Mail flood photo gallery shows the force of the water. 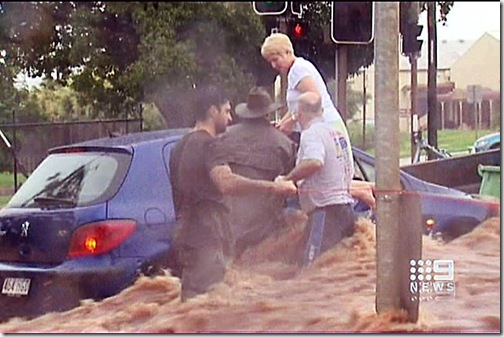 ve others, in some cases forming human chains. By the end, there were four confirmed deaths with three missing.

You will find fuller coverage here.

The sheer geographic scale of these floods is difficult to comprehend. Last night Brisbane itself was on full flood alert with fears that the city could experience a full scale flood.

As I write, the weather forecasts suggest some easing of the rain, although further heavy falls are possible.

The economic costs of the floods are already very high, reaching $A5-6 billion. The problem remains that with saturated catchments, further rain quickly translates to rising river levels.

In my earlier post, I included the medium term forecasts from the Bureau of Metrology covering the period to end March. These suggest a 60-75% probability over that period for above average rains across North Eastern NSW and Southern Queensland. This means that further floods are possible.

Neil has put up a companion post, Queensland floods. Listening to the radio as I drove back from the city this morning, the news just seemed to get worse by the minute. It's not just Toowoomba, but the small communities at the base of the range as well that have been affected. The death toll from this one event has risen to eight, the number missing to some seventy, although hopefully many of these will be found.

I won't attempt to live blog developments, but will give a summary update tonight.

Thanks, Neil. I have added a postscript.

Sent to me by a dear friend in Virginia USA, with the words "That's why I love the Aussies! No moaning and groaning".

(written of course before this latest episode)

This looks disastrous! I am glad I don't live anywhere near there....

Thanks for sharing information on Personal Reflections, i have visited your blog great post.................
engineering toowoomba