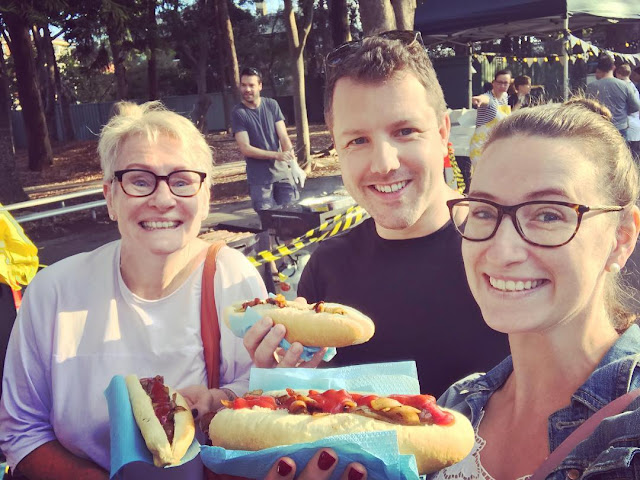 Today is election day in New South Wales as the people elect a new state government. It's been a complex campaign and no one knows who might win.

Australia has compulsory voting. Everybody must vote or be fined unless they have an acceptable excuse. This means that much of the Australian population must go to the polling place. Further, elections are held on a Saturday, making it easier for people to vote and to participate in election activities.

Many of the Australian polling places are at schools. Many years ago, school Parents' and Citizens' Associations or Parents' and Friends' Associations worked out that this gave them a captive market to sell things to voters to raise money for school activities. One popular result was sausage sizzles, BBQ sausages in buns with onions and sauce.

Probably ten years ago now, I have not traced the exact date, these sausages came to be called democracy sausages, a celebration of Australia's democratic traditions. The name stuck, and has become globally recognised.

Clare's birthday brought Helen and Christian to Australia to celebrate. Helen had to vote and decided that as part of Christian's introduction into things Australian he must experience a democracy sausage.

Now not all polling booths have sausage sizzles. In fact, the nearest booth to the place they were staying did not. Fortunately, there is now an organisation called democracysausage.org that provides details of the booths where democracy sausages can be found. Helen, a modern lass, checked the internet and took her mother and partner of the Randwick Public School where the aforesaid delicacy could be found.

Now here stories differ. Christian was hungry and ordered three. Helen ordered two. Then she, or so Christian claims, had half of his last one. making two and a half. Helen denies this, of course. She had, she says. just a bite. Two rather large bites responded Christian.

Whatever the truth of the story, and at the risk of getting into trouble with eldest I'm inclined to believe Christian, I think that the idea of a democracy sausage is one of those really nice concepts at a time when life sometimes seems just too serious.

JDB, that girl looks sooooo much like your dearest Mumma. What a great pity that she never got to know her in person. I reckon they would have got on like a house on fire.

Did you know that when the ancient Egyptians lost a cat, one sign of the deep grief was that they shaved their eyebrows? Poor old Avenger; I hope you gave him a good life, but I guess eyebrows (yours) intact? Not having to worry about an old, sick cat, and maybe having to help him across the Rainbow Bridge, must make your proposed move a little easier. We had to make the final decision about a sick old girl before we left Armidale, albeit still with 2 healthy stroppy Armidale acquired felines, one,always known as the last of the Armidale strays, Ses; short for Simon Earl Scots Grey Pitt Hyphen Crawley, and Rufus, the First Abyssinian - both now long gone.

Google Trends seems to indicate first usage back in 2016, and that it is a term pretty much restricted to Australia, as you say.

But I'll give you another term which seems peculiar to Australia (at least in politics): "waiting with baseball bats". This seems to have arisen around 2010, and has been applied variously in NT to the CLP, Wayne Goss in Qld, Cathy Newman's opponent in Vic, and a few times re Rudd/Gillard, and just today by Katherine Murphy about the Nats in this election.

It's a funny term, given baseball itself is a fairly marginal sport in Australia - but I guess "waiting with cricket bats" sounds a bit wimpish :)

Congrats for your youngest's marriage; I expect it was good to have the girls back in town!

Thanks, kvd. It was wonderful having both girls back here together. Helen and Christian left for Copenhagen yesterday, but I had lunch with them.

Interesting on democracy sausage. That confirms how recent it is. I do not know why we should take to people with baseball bats. It really should be cricket bats. I tried to find the derivation of the term. It's been popular here for a while.

Judi, Helen does look like mum. The loss of Avenger does make a move easier. I have thought about another pet. We shall see!