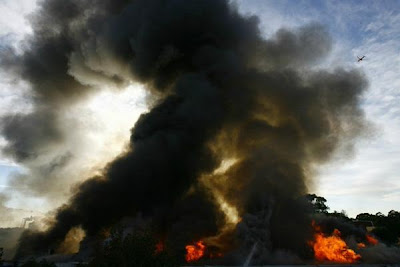 I had to go to work early this morning, leaving the house just after seven.

As I drove down the street I noticed this huge plume of smoke just to the right. Suddenly this deep black smoke was added to it.

As I neared the T junction at Botany Road a fire engine roared up Botany Road. I found Botany Road blocked to my right.

The fact that there was a big fire was clear, but where? Was it the storage shed where my records are kept?

Turning back, I managed to establish through the pattern of blocked roads that it was not the storage shed. So I drove on.

Later I learned that the fire was in a major hardware store about three blocks from us. Starting around 6am, by 7am the Fire Brigades thought that they had it contained to one part of the store. The fire then jumped. The black smoke I saw was the paint stores going up.

The fire was huge, with the plume visible across many parts of Sydney.

As you've no doubt heard we had some rather bizarre weather in Melbourne today. Hurricane-force winds shut down bridges and the rail network and killed two people. Watching the dust storm roll into the city was spectacular until I had to go outside in it. The colours in the shot of the fire remind me of it somewhat.

It sure is, BC. I was oblivious to Melborne's problems until driving home from work. I remember dust storms very well. We used to get a lot at home (Armidale) at one point.