A day at the Scots’ Rugby Sevens

I spent most of Saturday watching the Scots School Boys Invitation Rugby Sevens competition.   It was quite fun. This shot shows the Armidale School (TAS) in attack against Canberra Grammar.

Rugby sevens is a spin-off from the main fifteen a side game. While still part of rugby, rugby sevens has a become a game in its own right with greater international penetration than the main game because its rules make it easier for smaller rugby nations to participate successfully. Reflecting this greater mass reach, the game is a Commonwealth and now Olympic Games sport. 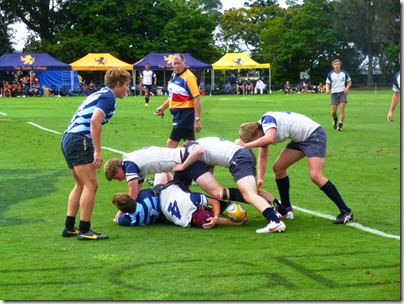 While played on a full size rugby field, each side has seven instead of the usual fifteen players. This requires a modified game.  For example, because there are only three forwards as compared to eight in the main game, scrums, rucks and mauls are necessarily simplified.

For non-rugby players, when a player is tackled carrying the ball, you need a process for releasing the ball to one side or the other. In League, this is the play the ball, in Union a ruck.

This photo shows a ruck in the Canberra Grammar vs  TAS game. The player who has been tackled, the TAS number 4, has placed the ball on the TAS side. He is allowed to do this, but he cannot protect the ball beyond that without incurring a penalty. The forwards have formed a protective shield to allow them to get the ball back to the backs.

I often write about the importance of, and impact of, rules. Rules and the breaking of rules determines how activities flow and form specific cultures. My frequent concern lies in the in the way that over-prescription of rules, regulations and penalties can affect what we do in often very perverse ways. In rugby sevens, the smaller number of players on a full size field makes for a very fast game. The rules are designed to support this.

A smaller number of players playing a big game across a large area makes for exhaustion. To accommodate this, games are broken into two short halves. seven minutes with a one minute half time break. The final’s time is increased to ten minute, with a two minutes break. At Scots with school boys playing, the games had six minute halves, increased to seven for the finals.

A tournament in which a side came to play for just twelve minutes and then got knocked out would, from a player perspective, be a very dull game. Even with pools before quarter or semi finals allowing more games, it would still be dull for the losers. To accommodate this, many sevens tournaments have a competition for a cup, a plate, a bowl, and a shield. As a team is knocked out, they can continue playing for a trophy at a specific level. This allows many teams of different standards to avoid leaving empty handed. TAS won the bowl this year.

One of the reasons why sevens is so entertaining beyond the speed and spectator elements is that the action is continuous. As one game finishes, the teams for the next are ready to run onto the field. The Scots’ program had five ten minute breaks when nothing was happening, but beyond that action was continuous from 9am to about 5pm.

This allows a largish number of teams to participate. At Scots, there were twelve teams from four countries and four Australian states/territories participating. Because each team played a number of times, you got to know each team just a little adding to the interest.

In all, it was a fun if very tiring day.