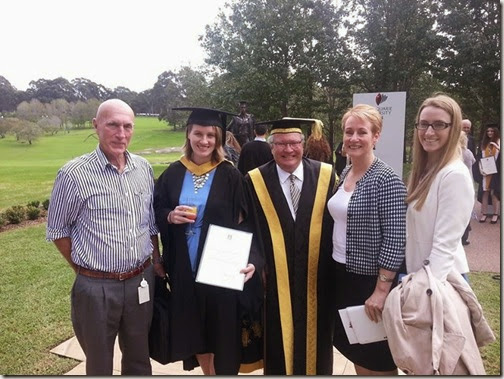 Milestones such as graduations always make me reflective.

It’s hard to remember back to all to all the events in my daughters’ lives.  Graduations in particular make me reflective.

Growing up  as an academic’s child in a university town,  graduations formed part of the warp and weft of my own life. They were part of the seasonal rhythms of the place, events that marked key periods in the yearly pattern.

Of all my friends, I know that Paul Barratt best remembers this pattern. Like mine, his father was an academic. He was also Esquire Bedell, carrying the University mace on formal occasions. Yesterday, the same type of mace was carried at Clare’s graduation. Michael Egan as Chancellor spoke of the traditions of a university.

Later, there came my own graduations, three in all, two at the University of New England, one at the Australian National University.  Then there were the other graduations of family and friends.

This shot shows my father being a 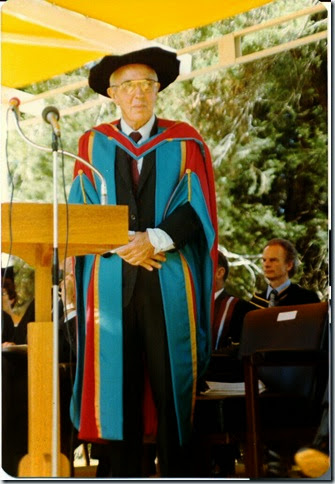 warded to Doctor of Economics from the University of New England in 1979.

I value these university traditions, more so as I grew older. Young, they were just there and seemed solid, enduring. Now I wonder.

In a corporatised world, the scope for history and tradition is reduced. At best, they become a marketing device, At worst, they are forgotten or ignored.

As I wandered through the grounds of Macquarie, I marvelled at the sheer size of the place, a young university just celebrating fifty years. There was the new private hospital, there the advanced hearing centre. This is big business.

I accept that I am old fashioned. In the case of my own university, I have long argued that it cannot compete by doing what others do. It’s just not possible in a world where size and proximity to other resources creates competitive barriers to expansion by those less well placed. Better to focus on the university’s key strength, the fact that it is still a university in a world where this is increasingly less true. Stay smaller, redraw the playing field, resist the dictates from Canberra, build for the longer term based on strengths.

Barber, having left the University of New England, has come back to small-town central Victoria, where destructive bushfires are still fresh in memory.

Ahead he sees a different kind of threat, a global challenge reaching into every region, and that’s largely why he quit early as vice-chancellor.

“I was increasingly conflicted between what I thought was best for the institution and where I thought higher education was actually going,” he says.

He believes many campuses will simply lose their customers — students and industry — if massive open online courses, or MOOCs, morph into a product that offers engaging online education at a cut price, and credentials accepted by employers.

And he sees Australia’s universities as captives of a risk-averse culture, looking the wrong way, fixated on the recruitment of ­locals for courses that offer little choice, despite the rhetoric of a system driven by student demand.

“This fierce domestic competition is occurring just as the international MOOC industry is taking off,” Barber says.

UNE, with its small-town campus and big online reach, is in a curious position.

Barber says he loved his time there, and feels pride in its rapid progress, but was torn between his duties as vice-chancellor and his revolutionary instincts.

“UNE was terrific, the council and others really tried to support initiatives, but I knew there was a limit to how far I could go,” he says.

“(In theory) you really could jettison UNE’s entire on-campus operation, get rid of enormous cost and run a fairly lucrative (online) operation.

“But the sort of damage that does to the (Armidale) region for the foreseeable future is unconscionable.”

He acknowledges that campus buildings — and the setting they provide for a school-leaver’s coming-of-age — may still be marketing magic for the “premium brand” universities of the Group of Eight, or at least for some of them.

But he believes many institutions may not survive without change to ingrained habits and attitudes, and as yet he sees little sign of a sector rising to the challenge.

“It’s more ‘the rabbit in the headlights’ that we’re seeing,” he says.

“The response tends to be ‘let’s go to (US-based MOOCs provider) Coursera and ask them if they wouldn’t mind including some of our courses on their platform’, but no genuine innovation because the extent that’s required is potentially too profound.”

It’s this state of the sector rather than anything specific to UNE that Barber invokes when explaining why he escaped the chancellery’s confines for the freedom of a digital gadfly.

“I’d like to remain in higher education somehow and I’d even be happy to assist universities meet the challenges ahead, but I want to do so free of the constraints that go with being a vice-chancellor,” he says.

“I want Australia to be part of the new digital era, so I’m basically looking around for like-minded individuals, and seeing if we can build something together.

“And if I can’t work it out, I’ve always had a hankering to make Italian sausages and red wine.”

Last week, too, the University of New England was ranked number two nationally after Bond on student satisfaction with the place. If Jim had had his way, UNE might have become a large commercially successful institution in the on-line space, but would it have remained a university, would it still rank high on student satisfaction? Would it still have that intellectual buzz that has marked the place.

In fairness to Jim, towards the end he articulated a strategy that attempted to reconcile the two, using money generated on-line to fund the less economic campus experience, but his focus remained on the new.

As I said, I am old fashioned.

I don’t like what’s happened at the Gang of Eight. I greatly dislike a system that imperils my old university because the performance indicators are defined in such a way that institutions have to deal with a state imposed uniformity that builds in barriers to real initiative outside the bounds dictated by those performance indicators. And, speaking very personally, I really dislike a system where, at the grass roots in academic areas that I love, academics are just so pressured in terms of doing that they no longer have time to think or to explore ideas for the love of those ideas. How do I talk to them?

At Clare’s graduation, I was talking to two former UNE staff members. I think that they met at UNE. Certainly, UNE formed a key part of their relationship. They came to Macquarie for career reasons. There they had a significant impact on students in their chosen discipline. But, and for a whole variety of reasons, they remember their UNE period as a golden time, a time now lost.

Well, perhaps time to finish this muse. There will be more graduations. But, for the moment, an era has ended.

Congrats on being a proud dad (again)! We could have a long and ongoing discussion around this topic. Did you ever get any responses to your queries re Newcastle Uni?. Separated by generational gaps, my off and on experiences at UNE arouse different emotions, and as a post grad student and staffer at ANU, my experiences went from 'wow' to how soon can I ditch this dump? One of my lovely stage daughters who did ugrad and hons @ ANU is a PHD candidate @ McQueerie. Back in town the other day - had coffee with her -and she is SO full of praise for McQ, that I am almost convinced to pick up where I left off and reconsider the PhD there. As PSW and I and sundry old ex RAAF types are wont to say; 'this isn't the Air Force we joined'. These aren't the universities we went to! Maybe we're just old, and should quietly take the hemlock when it's offered.
O tempora! o mores!

Congratulations Jim and please do convey to Clare too. Having attended three convocations of my son, I know exactly how it feels.

Yes, congratulations to your daughter and best wishes for her future.

Thanks, JCW, Ramana and kvd. Will pass congrats on to Clare.

I got one response on the Newcastle question from Scott, a suggestion that a history of the place had been published. I haven't been able to find it via web search. The UNE material, Sydney too, is dominated by people (students and staff)who went to uni during earlier periods or who were actively involved over longish periods. I suppose that the key thing that triggered the writing is the importance of the personal experience to them. It may be a case of O temporal o mores, but there is a difference between immersion and the transactional experience that seems to dominate the present university scene.

All experiences are multi-faceted and change as institutions and society changes. What happened with my own PhD at UNE, the fights and mess that are still talked about now if to a diminishing degree as people age, was deeply disillusioning. Just before he died, my father who had read the PhD said that if it was rejected I should not rewrite. I think that he knew what was happening, had inquired, but couldn't talk about it.

My own experience, yours with your PhD or so many other students with theirs, illustrate the imperfections in system over time, illustrate the way that bias and poor systems clothed in academic authority can masquerade as sometimes standards and objectivity.

Perhaps you should reconsider a PhD. I have occasionally thought of it, but it would detract from my writing! From Clare's experience in ancient history at Macquarie, there were many attributes there that I would classify as old university. It was a deeper experience than I have seen in other recent cases.

Well, I had better start the day, leaving aside the thoughts that your comment raised. I have to deal now with the more pedestrian world of project plans, policy revisions, process documentation, risk analysis. Broader ideas must be set aside!

Maybe we're just old, and should quietly take the hemlock when it's offered.

Probably best, but make sure you keep the courier docket, and don't ever write a thank you note!

That did make me chuckle, kvd!

There was a talk broadcast on RN by the chancellor of Macquarie Uni.

It didn't rise above the faddish cliches of managerialism.

It is well and truly time to leave Uni's and construct learning places (which Uni's could have been).

Paul Goodman's Community of Scholars is worth reading.

Yet somebody else that I have not read, Evan! The book sounds interesting from a Google scan.