Bogie or Bogey in Australian English 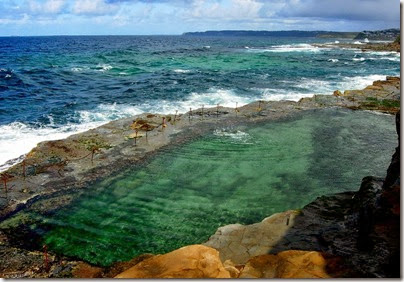 I knew these names, but had never thought of their meaning. They are, in fact, very Australian. The Australian National Dictionary Centre describes the word in this way:

“Bogey (also spelt bogie) is a borrowing into Australian English from Dharuk, the Aboriginal language of the Sydney region, where it meant 'to bathe or swim'.

The earliest records show the term being used in the pidgin English of Aborigines:

1788 Historical Records of New South Wales II: I have bathed, or have been bathing... Bogie d'oway. These were Colby's words on coming out of the water.

1830 R. Dawson, Present State of Australia: 'Top bit, massa, bogy,' (bathe) and he threw himself into the water.

By the 1840s it was naturalised in Australian English:

In Australian English a noun meaning 'a swim or bathe; a bath' was formed from the verb:

1847 A. Harris, Settlers and Convicts: In the cool of the evening had a 'bogie' (bathe) in the river.

1869 W.M. Howell, Diggings and Bush: Florence was much amused the other evening by her enquiring if she (Flory) was going down to the water to have a 'bogey'. Flory was much puzzled till she found out that a 'bogey', in colonial phraseology, meant a bath.

1924 Bulletin: A boar was discovered by two of us having a bogey in a 16,000-yard tank about five miles from the river.

1981 G. Mackenzie, Aurukun Diary: A bogey is the Queensland outback word for a bath or bathe.

A bogey-hole is a 'swimming or bathing hole'.”

Why should I suddenly discover this now? I have been reading Ian Hoskins’ Coast: A history of the New South Wales Edge (NewSouth Publishing, Sydney 2013).  One of the themes in the last part of my history of New England is the rise of the coastal strip, the fall of the inland. This actually happened quite suddenly and especially from 1980. So I was interested in if depressed by the phenomenon.

The social and economic changes that I had identified and Hoskins mapped are interesting in their own right; they add texture to my story. However, in writing, Hoskins refers to to bogie as the word that came to be adopted for sea bathing.

The early British settlers did not swim as such for sport. Swimming described a physical activity, but most bathed. They went into the sea and especially the still waters for that purpose. The sea was, I suppose, the equivalent of the Roman baths.

The Australian coast with its surf was rough and dangerous for those, and this was most, who could not swim. Worried about deaths from drowning at the Newcastle convict settlement, Governor Macquarie directed that people should avoid the surf and bath only in the sheltered waters. Quite quickly, bogie became a word for sea bathing, bogey hole a place where it was safe to bath.

Oh dear, I had to laugh. Where indeed?

Do you remember anything about the so called Square Hole in that vicinity, into which hapless swimmers could fall and potentially be trapped forever? I never could tell if it was something that physically existed, or a tale the Novocastrians lay on all clueless visitors?

I don't Scott. I wonder if anyone else does?