Saturday Morning Musings – Florentine bankers with a dash of Palmer 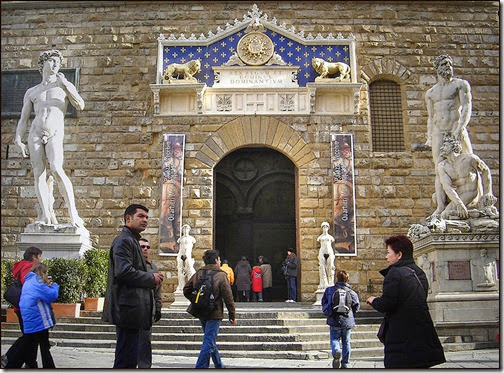 Our blogging colleague AC is presently in Florence and seems to be enjoying herself enormously. This is a Wikipedia shot of the Palazzo Vecchio.

I didn’t like Florence as much as Venice or Rome;  it seemed over-hyped. That said, it is a fascinating place.

The Fairfax Press has just released the BRW Australian Rich 200 list. Gina Rinehart leads at a tad over $A20 billion. Then there is blue sky until the Pratt family kicks in at $A7.6 billion. I felt a little sad for Frank Lowy. He came in at fourth with just $A7.2 billion. Perhaps the new restructuring of Westfield fought through against strong opposition will help.

That was a magnificent segue because it allows me to go in so many directions. I must be disciplined! In a way, Florence was developed by the then equivalent of the BRW top 200. I have always liked the battles between the rival Strozzi and Medici families. Both made their initial money out of banking – Florence was at the centre of the invention of modern banking. Both used their money to gain political power. Both then built things. 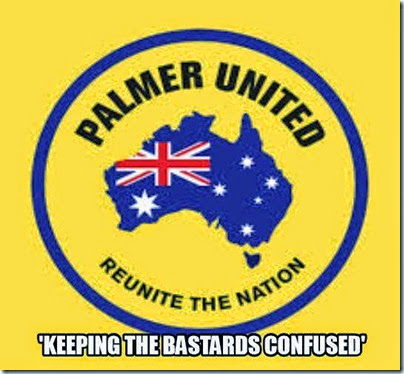 The only Australian equivalent that I can think of is Clive Palmer. Well, that’s not quite accurate. Still, its the base for another segue.

This image was apparently developed following a comment by skepticlawyer aka Helen Dale. It’s a play on the original slogan of the Australian Democrats (and here), keeping the bastards honest.

Views vary on Clive Palmer. Personally, I have fluctuated between thinking him a complete buffoon and then laughing out-right at something he said. He is, in fact, a very experienced political operator as well as a consummate showman. You will get a feel for this from Neil Whitfield’s post Shock and Gore and the weather in West Wollongong this morning. I would hardly have thought of Neil as a natural Palmer supporter, I am not saying he is, but he is clearly drawn in by the theatre of it all.

The Al and Clive show in Parliament House was one of the most effective pieces of political theatre that you will find. There was the suspense, the secrecy, drawing the media like flies. Then to find Clive and Al Gore standing together was so far from left field that it blew the media apart. It actually changed the political landscape.

However, beyond the theatrics there were two things that I found interesting.

One was the role played by veteran conservation campaigner Don Henry in stitching the whole thing together. This was quite clever, because it shifted the debate away from the messages that the Abbott Government had been trying to deliver.

The second was the apparent reaction of the new Palmer United Party party room. If the reporting is correct, they would not agree with their boss on the deal, throwing the whole plan into a degree of disarray; changes had to be made to allow the show to proceed. This is quite important, for it suggests that the new parliamentarians, and they are all new, are not mere ciphers. They never would be of course, Parliament doesn’t work that way. Still, now they face the challenge of developing coherence as a group.

Well, the day has dawned. I had other things that I wanted to say, but it is time to move on.

Cousin Sophie’s take on the Palmer matter in The Saturday Paper.

This second postscript has nothing to do with the main theme in this post. I record it simply as  remarkably bad example of “popular” history. Archduke Franz Ferdinand: The man whose assassination is blamed for triggering World War I.

David Marr had a good piece in the Saturday Paper on the low grade farce of the Archduke's assassination.

Hi Jim I've done a bit of research on Clive, readily available to anyone with an internet link. For starters he is no where near as wealthy as he likes to think. Most of his assets are unrealized and at least two of his flagship companies have posted losses in 2012.

Speaking of flagships, Mr Palmer's flagship aka Titanic has not even commenced construction, in fact the Jinling Shipyard in China has not even signed off on construction of the 500 million boat. That's right not one rivet, not one bolt has been laid. Nothing.

Now I'm the last one to throw cold water on another political party presenting itself as a viable alternative to the current duo of duds but lets not forget this one-time Bjelke Petersen stooge has even less credibility than the current bunch.

He's the new Pauline Hanson. Where the masses cry "Give us an alternative, anything please!" But once the public wises up he'll be gone like yesterdays one hit wonder.

Keating nailed it when he once said of someone else "This man is all tip and no iceberg" Funny really because I would love to see the Titanic float again.

Thanks for the lead on the Marr piece, Evan. Had seen something very similar in an ABC opinion piece. It took my thinking in a different direction.

I have wondered about the wealth thing, John. ABC Fact check did an earlier review that concluded he was no longer a billionaire - http://www.abc.net.au/news/2014-01-22/clive-palmer-billionaire-status-uncertain/5205704. Friday's BRW rich list had him at $$1.22 billion, down from $2.2 billion the year before.

You may be right on the politics, but I have to say that I enjoy the spectacle! Pity about Titanic 2.