Feel free this Monday to go whatever direction you like. A few snippets first.

For those who follow twitter, the British Foreign Office is live time tweeting the cable traffic that began with the assassination of the Archduke.   This is an example of the material. Mr Jones was pretty accurate! 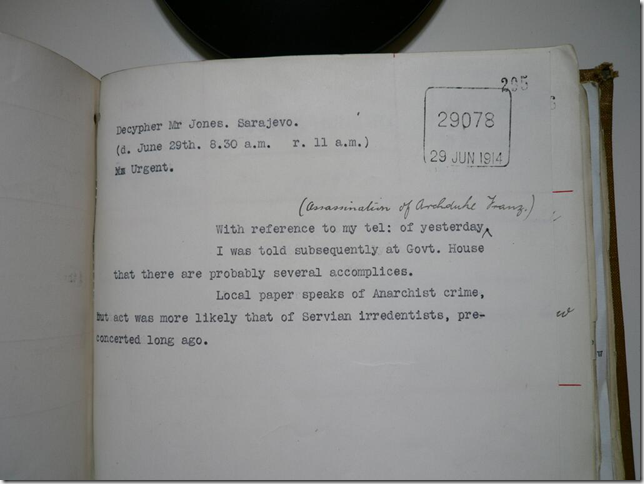 The Australian Government has released the interim report on the restructuring of the country’s welfare system. A six week consultation period has now begun. I haven’t had time to read the document properly. I do agree current welfare benefits need simplification.

On the Bank for International Settlements’ annual report:

In its annual report, the Swiss-based Bank for International Settlements (BIS) expressed serious concern that global share markets had reached new highs and the interest rate premium for many risky loans had fallen.

"Overall, it is hard to avoid the sense of a puzzling disconnect between the markets' buoyancy and underlying economic developments globally," the bank wrote.

The BIS says the disconnect is largely due to continued monetary stimulus in the form of money printing and record low interest rates by many developed economy central banks.

In the US, the latest GDP figures showed a contraction in the US economy. Economists do not appear too worried, attributing it in part to a harsh winter. I must admit that I am worried about the quantity of money sloshing around. A long time ago, I said that I could see no easy exit path for the US Fed’s quantitative easing. That remains my position.

The Commonwealth Bank of Australia’s troubles over its financial planning arm continues. I am not a great supporter of more regulation because of the costs. I do think that the CBA need to be held accountable.

In the Middle East, ISIL has apparently declared the establishment of a new caliphate. Meantime, Iraq has acquired some second hand jets from Russia, while trouble continues in the Ukraine.

Proper cheer up session, isn’t it?!

Still, down on the Amalfi Coast, the tourists will shortly be joined by eldest. Just back from Copenhagen, she flies out again in just under two weeks. Half her luck!

kvd does not like the topic. To explain his position, he provided a link to this contribution by the Boomtown Rats:

Does anyone know Patrick McClure's background?

Total optimist that I am, I was thinking that with ISIS/ISIL's recent military defeats, the move to declare a caliphate indicates an acceptance that times are about to get tougher for them and they need a new strategy.

Hi Evan. Sorry for the delay in responding. The bloke's CV is here -http://www.dss.gov.au/our-responsibilities/review-of-australia-s-welfare-system/reference-group#pm.

Good morning, 2 tanners. Interesting point. I don't think that its a new strategy, just a mark of success. But it makes them easier to hit.

Thanks Jim. Much as I feared. As with the rest of the board.4805

Yes, it is slanted in a very particular way, Evan.

Wonderful article. But recently if you are looking for a new project management job or if you might have asked for a promotion within your company then you might have heard about PMP credentials!!. It is true that a Project Management Professional (PMP) credential is one of the most sought certifications by employers and employees alike. For its detail information about a PMP certifications you can go through http://www.pmstudy.com/