My background reading at the moment is solidly entrenched in the Hunter Valley. Reading intensely on a particular area, even one I know reasonably well, is always informative because of the linkages it establishes in my mind.

Once a mental pattern is established, new information challenges, deepens, shifts the pattern. Something that would have seemed dry or even trivial becomes meaningful. “Wait a minute”, I say to myself, “that’s a nice example.”  Alternatively, I say to myself “That can’t be right. It doesn’t fit!”  Then, sometimes, something that is apparently local or personal or family will take me in a new direction far removed from that locale or even time as I seek to understand. 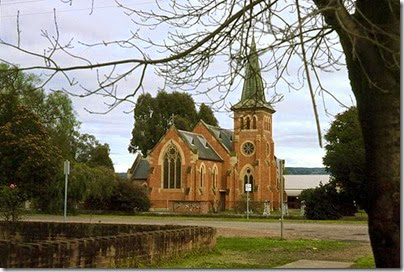 My present train reading, Edith Potter’s  The Scone I Remember (Scone and Upper Hunter Historical Society, Scone, 1981) is a case in point.

Scone is a town in the Hunter Valley.  It’s not a big place, but one with a considerable history. The photo shows Scone’s St Luke’s Anglican Church.

Edith Potter’s recollections cover her younger life in Scone in the period leading up to and including the First World War. Her family, the Hulins, came to the area in the middle of the nineteenth century.

The book is packed with detail, you could walk the streets of of old Scone with it in hand. It is loaded with names, I think that Edith tried to include every name she could!, to the point that they blur. It is a very polite book. Yet it’s also a very good book in part because of all that detail.

When I first started to read the book I got a little lost in the names, although even then there were patches of recollections expressed in a writing that sucked me in. As the book progressed, the detail became important. The names of the main stores are just that, names, although I knew some. The detail of their physical location will mean little to someone who does not know or is not interested in Scone. However, the descriptions of the stores and the life that revolved around those stores is interesting.

More broadly, in describing the detail of daily life Edith provides real texture. Take women’s clothing, those complex long dresses that were fashionable at the end of the nineteenth century. Edith describes not just them, but the whole paraphernalia from undergarments up, the fabric, look and feel. She describes the detail of the ceremonies and sometimes tragedies of life as expressed in one place at the one time and especially among one group. The laying out of the bodies in a formal sense, the procedures for saying farewell.

I said that books like Edith’s took me in new directions. In my case, it’s my next two History Revisited Express columns looking at changes in women’s life over the last century and a half. My conclusion is not quite what you might expect. The grand fights of the women’s movements in the last half of the twentieth century were second order issues. They were major changes, but they could not have occurred without earlier changes.

For some reason, bobbed hair has become my mental symbol of the fundamental change that took place. The trigger for this is a simple one. Edith describes the pain that could result from the combination of long hair with long high necked dresses with multiple small button holes stretching up the back. The hair became entangled with the buttons; getting undressed could be painful. In the end. you might just have to cut the entangled hair.

I well remember the problems I had in getting knots out of my daughters’ hair as I brushed it, They would wriggle: “Daddy, you are hurting me!” So I could empathise with Edith’s predicament.

I will return to this theme once I have finished my columns. In the meantime, I will finish reading Edith’s book with great pleasure. Maybe, later, I will tell you a little more about Scone. There are stories there that have a modern resonance that you may find surprising.