Saturday Morning Musings – the rise of rules based societies 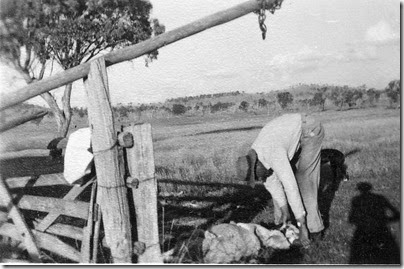 This photo is dedicated to kvd. It shows an old ewe being butchered for house meat on Glenroy. To understand the background, you need to look at the comment thread on Australia’s weakening economy.

I haven’t said anything on climate change for a while. Really, the debate  now is almost theological in its intensity. I have had nothing to add. Still, here are two contributions that I think worth reading.

Back in February on Stubborn Mule, James Glover’s Bringing Harmony to the Global Warming Debate used simple statistical techniques to test the significance of the claims and counter claims about the number of record heat days. His analysis suggest that in statistical terms, the probabilities are in favour of recent warming. On the other side of the ledger, Don Aitkin’s A short summary of the supposed ‘consensus’ provides a useful overview challenging the constant use of apparent scientific consensus to justify a pro-climate change position.

My lay view remains that the probability is that temperatures are increasing and that human activity plays some part in that. In political terms, the consensus view that climate change is happening and is important remains globally dominant. This creates a divergence between the stances adopted by the current Australian Government and the evolving global position, a divergence that will create difficulties for the Government.

Again speaking personally, I wish the Abbott Government had not locked itself into the abolition of the carbon tax as opposed to modifications to the scheme. If, as seems likely, some global pricing mechanism emerges as a way of reducing carbon emissions, then the architecture would already have been in place. Instead, we have an expensive direct action program of dubious worth. We would have been better off with a  a pricing mechanism set at low levels that could be increased if necessary while saving at least some of the money connected with direct action.

That’s water under the bridge now. I accept that the current Australian Government has stated its position and campaigned on that position. Meantime, we are dealing with the legacies of previous direct action policies that are now distorting the operations of the economy in perverse ways. Feeder payments on solar energy is an example.

I don’t agree with Don’s interpretation of the Pink Batts matter. I reflected on that and associated issues in Saturday Morning Musings – public administration, dashboards and pink batts. However, I do worry about just what the current NSW ICAC inquiries are saying about the apparent decline in civil morality within the Liberal and Labour Parties.

The difficulty is that Australia today is very much like India in the decades after independence. There are rules for everything and everything has its rule or rules. As rule breaches mount, new rules are introduced to counter the breaches.  Rule based approaches reflect a lack of trust. The citizenry cannot be trusted to try to do the right thing. It must be told what to do and then punished for non-compliance. This imposes economic and social costs. Today, everybody is a law breaker to a greater or lesser extent.

NSW recently introduced a law making it an offence to cross a road against a do not walk sign. You must observe the prohibition or be fined. On my journeys too and from Parramatta, there are two crossings where this rule is breached every day by many people, me included. Why? The pattern of lights and traffic are such that there are circumstances where it is safe to walk against the do not walk sign. Indeed, it can be safer to walk then than when the walk sign shows because there is less chance of being skittled by a driver running the lights.

The NSW Police have conducted blitzes to enforce the new rules. These have been very lucrative so far as the NSW Government is concerned. One blitz and you have funded the salaries of the police involved for several weeks. Think of it as a cost recovery exercise. In practice, the police ignore the rule beyond blatant breaches. Why? They have more important rules to enforce. They can’t enforce them all all the time. They have to set priorities and exercise discretion.

This has always been the case and especially in the country where the police live in and are an integral part of the community. So and so has been drunk and disorderly but is not a bad chap. He just does that from time to time. He doesn’t hurt anyone. Ignore the offence and send him home to sober up. This type of personal judgement can create problems; rules have been introduced to stop it; Magistrates pontificate, they lecture, they impose punishments; the most impressive buildings now in many country towns are not post offices or banks or churches, but police stations and court houses.

The solution to over-rules is to reduce the number of rules, to simplify. That’s central to the Australian Government’s campaign to reduce red tape. Yet that campaign focuses on economic restrictions, freeing that thing called the economy. It does not address the broader question of over-regulation, of too many rules. The Abbott Government is, in fact, just as command and control, just as rule based as its predecessors. Consider, as an example, the new rules relating to the Newstart Allowance.

Finishing with New South Wales, if we did not have public funding of elections nor the restrictions on political donations, we would not have had the ICAC inquires into the breaches in electoral funding laws. There would have been no offence, no corruption.

To my mind, the real issue in NSW lies not in rules nor breaches of rules, but in transparency. If real estate developer X or mining magnate Y wants to donate funds to the political process, if they want to use their money  to undermine an MP, let them. Just make sure that the financial flows are on the public record. Then we, the citizenry, can respond.

One of the interesting tests that you can apply to current rules based approaches is to move them back into the past. If they had been in place, would the good things that we value now have come? Often, the answer is no. The world changes, so it’s just a corrective. Still, it’s a useful one for all that.

Evan pointed me to Merchants of Doubt and especially Chapter 6. It makes for sad if gripping reading. One of the difficulties is that there are, in fact, a number of conflicts/debates going on at the one time. One is about the science itself. A second is a political/ideological debate. The two overlap and interconnect.

The previous acceptance of the global warming hypothesis in this country at least, gave rise to some very silly populist public policy decisions. It also created a climate, pun intended, that facilitated the rise of the denialists. Now we are getting equally silly responses on the other side.

It really doesn’t matter. Keeping things very simple, we will know within a finite period – my children’s lifetime if not my own – whether the science is correct or not. As time passes, the probabilities will progressively firm up one way or the other.

As an analyst, my perception is that the global consensus view that human induced change is happening and is important continues to hold despite the attacks. This view mixes with other things such as the Chinese political need to clear atmospheric pollution over their big cities. This requires changes that would, I think, be facilitated by global warming action. So there will be action of one type or another.

If you are in any doubt about denialist's willingness to distort and outright lie about climate change the relevant chapter in Merchants of Doubt will relieve all doubt.

It is written by historians so well footnoted. But it is written in that style of high class journalism that Americans do so well. Which means it is skimmable too!

I obviously endorse Evan, JIm, but look also at this PDF file Reaffirming the 97% consensus, which seems to me to be well argued.

Thanks, Evan. I found the chapter in question and have brought it up as a link in the main post.Neil, for some reason I couldn't load that PDF. Will bring it up later.

A meaningful debate requires an acceptance of different conclusions based upon the data over short and long timeframes.
The planet Earth I am sure was not designed purely for us and there have been times over the eons before mans existence when climate change had an impact and was generally toxic.
But being the arrogant egotist that man is he can will convey he can control everything for man's betterment but if he actually can't then he should not try to change the world and pretend he can.

Hi Peter. Interesting re-reading this post after a lag.

I agree that humans tend to make arrogant assumptions about their role and indeed influence. However, I'm not sure that I properly understand the point you are making.