Sunday snippets – a crazy sporting day, a new Australian carbon date and the tyranny of 500 words

Yesterday was certainly a sporting day, with three Australian teams playing internationals in three sports in three countries! Crazy, really. It began in the morning Australian time with the world cup soccer match against Chile in Brazil. It was an exciting match in which Australia actually did better than expected, going down 3-1.

In the evening, Australia played France in the rugby, grinding out a 6-0 victory at the Docklands Stadium in Melbourne.  It wasn’t exciting rugby, too many kicks, while the application of the scrum rules seemed to slow the game down. The most exciting phase came right at the end when the French, threw everything at the Australian line in a desperate bid for a converted try to that give them a win.

Then at 11pm eastern time came the finals of the Hockey Women’s World in the Netherlands. While I knew that it was on, I hadn’t realised that it was going to be broadcast until kvd alerted me to the possibility.

The Dutch had cruised through the tournament, including an earlier 2-0 defeat of Australia during the qualifying rounds. The Orange showed their class from the start of the game, rattling the Australian side. This photo from the Official Hockey World Cup site shows Australian goal keeper Lynch in desperate defence. In bringing the Dutch player down, Lynch incurred a penalty that led to the first Dutch goal.  After that initial period when the Dutch scored twice, sound familiar?, the Australian side settled down and managed to hold the Orange girls.  Lynch played an absolute blinder of a match, helping keep the Australians in the game. 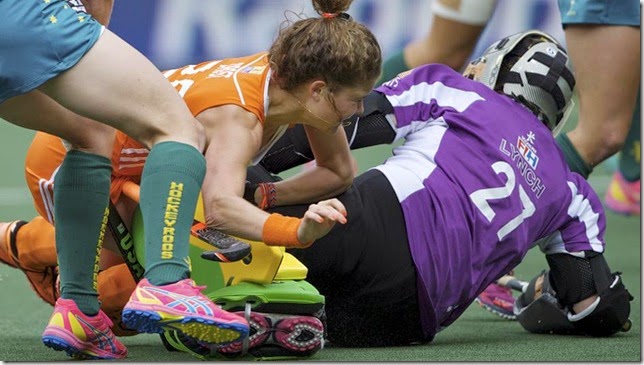 Changing tracks entirely, across in Western Australia preliminary dating results from an archeological dig at the Ganga Maya Cave in the Pilbara suggest that the site may have been first occupied more than 45,000 years ago and then used from time to time up until about 1,700 years ago. The site therefore joins other older first occupation sites:

The long period of human occupation of the Australian continent spans massive climatic and sea level changes. My personal historical interest remains focussed on Northern New South Wales. There we know that about 5,000 years ago the area, like other parts of Australia, went through a period of technological change and population expansion that has come to be called intensification. But what happened before that? What happened during the cold mini-ice age?

The oldest confirmed nearby site that I am aware of is in Southern Queensland, dating from around 22,000 years ago. We simply don’t know what happened in Northern NSW, although it seems possible that human occupation (if it were there) ceased on the cold dry sub-glacial New England Tablelands. Part of my difficulty is that, to make reasonable guesses, you have to understand the likely pattern of the past climatic and sea-level change at local or regional level. If you know that, you can at least develop reasonable hypotheses, I don’t, not at level of detail required. Sigh.

Moving North, the Australian Government has released its Green Paper on the development of Northern Australia. Not unexpectedly, the Australian Conservation Foundation’s take on the whole thing is quite negative. I have yet to read the paper.

Finally in these short  Sunday Snippets, interesting discussion on ABC Radio National on the changing length of news pieces, I can’t give you the link because I heard it in passing and don’t even remember the program, It appears that 500 words is now the desirable maximum. As it happens, the required maximum word length of my weekly history column is just that, 500 words, so my attention was caught.

The point of the piece is that 500 words is not a lot in which to provide a full report. There is a very special discipline required in compressing detail to that length while keeping it interesting and factual. It requires careful selection of the words and facts to be included.

In my case, I can see the paper’s point. The column is there to interest, to attract readers to the Wednesday magazine section of the paper. The paper adds a photo and headline plus, depending on the story, another photo, featured quote or some other subheading. My column is generally the only content on the page, the support for the advertising; the actual space occupied varies depending on the advertising mix. The  subeditors rarely change my wording beyond sometimes compression. Their skills lie in presentation. Generally, not always, they do a pretty good job.

I hadn’t actually realised the extent to which my column supports a page until I came to write this piece, looking back over the last dozen columns or so. The same pattern holds for other featured columnists. The feedback I get on the columns from the paper itself and readers suggests that the column is reasonably popular, especially among older readers and longer term residents. You would expect that demographic, given the history focus.

The columns aren’t on the on-line. For that reason, I publish them on my history blog with a lag. You will find the 2014 series here. The blog version is far less pretty, in part because I don’t always have access to the same photos, in part because of layout constraints.

Returning to my main theme, I know from experience just how hard it is to compress a story to 500 words, especially when you have to write stories week in week out. So much is lost. I get around it to a degree by writing series, although that’s complicated because I know that many who might read simply won’t have read the previous piece or pieces. But in news reporting, 500 words on a topic is sometimes all you will get.

For a news junky like me, that’s very dissatisfying!

Thought we were up against it, but agree it was a noble defeat.

Also, it's sometimes hard to reconcile the broadness of your interests with the narrowness of my own. For instance I read that "new Australian carbon date" part of your heading, and expected to read some sort of report that our PM was revising his climate change policies :)

It was a noble defeat, kvd. I have watched enough hockey now to get a feel for relative skills and filed positioning. The Dutch were just very, very, good.

On your second sentence, mmm! Another possibility with the heading would have been to talk about the apparent love affair between the Canadian and Australian PMs.

Ha! Good thinking. But again, our minds are on different plane(t)s.