This weekend, youngest has a stand at Supernova. For those who don’t know it, it is a pulp culture exhibition. This is youngest’s brand. 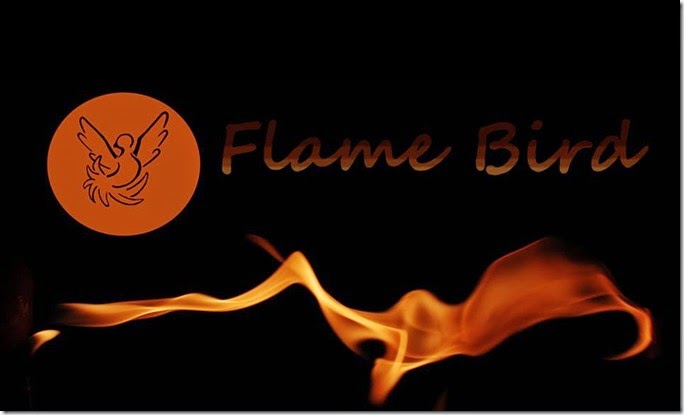 This photo shows them setting up for the combined Flame Bird and Sydney Comic Guild Supernova stands. 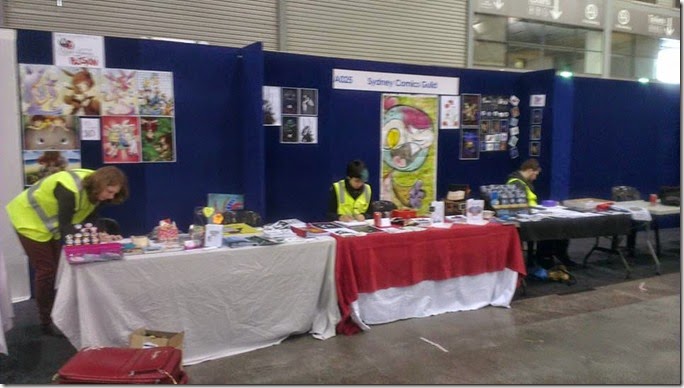 I have followed my daughters’ journeys with love, interest and 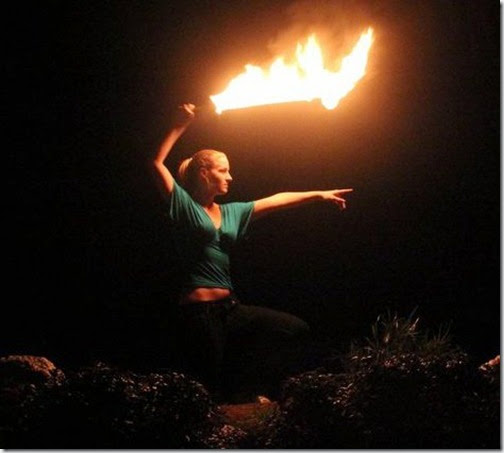 great admiration. They inspire me.

This is a picture of youngest in an earlier mode. Note the continuing fire theme.

We are all influenced by our experiences and those of whom we love the most.

Most young people really, really, don’t want to be stuck on the dole, what is now called the newstart allowance. It sucks on just so many different levels.

If that’s your only income, if you have no back-up from family or friends, you can’t live on it except in poverty. You have to comply with increasingly onerous rules. The income limits, the way that your allowance drops if you earn, actually rules out getting that extra bit of cash that you might need to increase your income, to get that piece of clothing that you need for an interview or just to take a break, to go away.

Rent is the most difficult thing, followed by utilities and then travel costs. If you are already in the welfare sector, if you live in social housing and have subsidised rent, then it’s a little easier to live if harder to break out of the poverty trap. Why harder? There is a big difference between market rent and a rent capped at 20 to 30% of whatever income you have 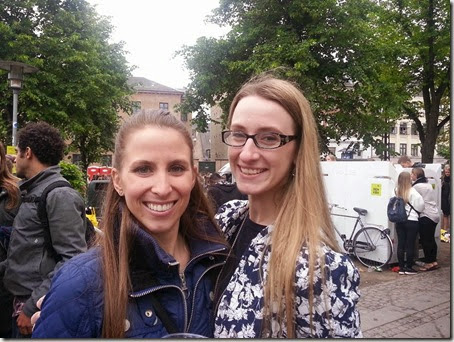 The aspirations of young people, all people, vary. This is  a photo of eldest in Copenhagen. She is there on business, a trip that she earned because of her value to the company. She is focused, organised, in a way that leaves me somewhat in awe.

Two girls, two very different personalities with different aspirations and interests. Both are strong women. Neither displays any aspects of what Treasurer Hockey would call a belief in entitlements, nor (for that matter) do their friends. If anything, I would say that neither has any trust in the state or the benefits offered by the state.

Both have received benefits, the HELP or HECS scheme, the youth allowance or newstart. Both have navigated their way though the myriads rules involved. They have tried to work out the practical issues of how to comply with the rules while gaining the extra income they need to survive. Both have had family and friends that they could rely on. 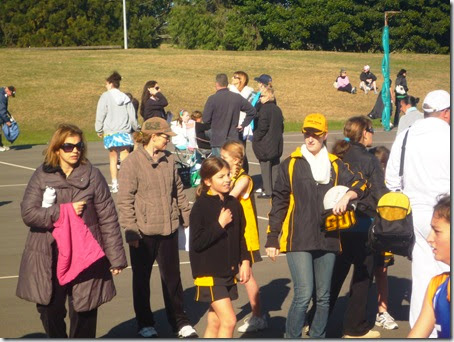 This next photo from a few years ago shows eldest with her netball team.She enjoys netball and kids, loves coaching. It also gave her a little extra cash.

In our modern world, friends and, more broadly, networks are very important. It determines who gets a job, what support you have when things go wrong.

I am not talking big picture stuff here, just the opposite. All young people today need part time work, they need back-up if things go wrong. This is where who you know, what you do, what you have done, becomes critical. Will your housemates carry you if you can’t find rent? Where can you turn to if you lose your accommodation? Who can give you the next job?

Those kids who do not have the right networks, who live in the wrong area, who mix with the wrong groups, are in trouble. Sometimes its a personality issue, more often a lack of opportunity. I grew up in a world of very low unemployment. of abundant opportunities. That world has gone now, The broad scope of opportunities has exploded, while immediate opportunities have declined, become more selective, more restrictive.

The same problem is emerging at the opposite end of the age spectrum. Those on old style super retire as soon as they can. Indeed, they often have too to maximise their benefits. Those with accumulated assets can retire. The rest have to manage as best they can.

Some things have improved, The abolition of compulsory retirement, the partial enforcement of laws against ageism, have allowed more people to continue working well past 65. Mind you, this has it’s own problems, for it also blocks out younger workers.

There is another problem in our more fragmented society. We are now dealing with the affects of earlier marriage break-ups. This one is complicated. However, the bottom line appears to be an increasing number of people and especially women who no longer have either the assets or the networks to provide  the most basic support they need.

This is not a lecture but just an observation.

For all its socialistic rhetoric India never did create a welfare state and the youth of India have had to fend for themselves either on their own or with the support from their families. It is therefore startling for me to read your take on your system which Indians would give arms and legs to have to handle their post education pre employment stages.

Rummuser there is a state in India that pays old age pensions. UP?

I agree with all you say Jim.

And I want to emphasise how impressive I find young people.

I think they are way saner and more engaged than my generation at that age. And we have created a world for them that is difficult and nasty in so many ways.

I think the three characteristics of a good society are: peacefulness, widespread opportunity and economic security.

We all start from different perspectives, Ramana. It will be clear that I dislike some of the changes that have taken place in Australia, dislike as much the cant surrounding those changes. The fact that Indians might give their arms and legs to have what Australia has is actually not a comfort!

Winton, my starting point has always been equality of opportunity, recognising that this is not always possible. In this context, I would agree with your first para subject to the qualification that economic security is not and never has been absolutely possible.

On your second para, I found your comment interesting and perhaps a useful corrective on Australian reporting on PNG. I agree that where economic security exists, then people are better able to meet other needs. What I am really struggling with is what I perceive to be to be the growing levels of economic insecurity in Australia, the increase in inequity and a decline in equality of opportunity.

In material terms, Australia is a wealthier country than it was in the nineteen fifties, but on two of your three indicators at least, widespread opportunity and economic security, Australia today does less well than in the 1950 or 1960s.

Jim
I know where you are coming from, but I think you are wrong about the trend in opportunity and security in Australia since the 1960s. Jobs were easy to get in the 1960s, but pay was pretty low.Technological advances have done a lot to reduce costs of communication and transport (particularly air travel)and to improve health care. Opportunities for women were much more restricted in the 1960s.

However, I haven't done any statistical analysis to try to bring all that together.

Interestingly, the survey data tends to tell us that people feel that they have better quality of life than their parents.

I don't think that anybody could argue, Winton, that there hasn't been an expansion in the range of opportunities since the 1950s and 1960s. It's equally hard to argue that certain barriers haven't come down such those restricting female access in the workplace. However, its not unalloyed joy.

In his book The Way things Were, Don Aitkin looks at social change in Australia through the eyes and experiences of his Armidale High LC class. None of them would go back to was things were in the 1950s, Don himself thought that the expansion of mass education was the greatest single achievement of the period since.

However, while the class did not want to go back, there was a sense of weariness at the changes that had swept Australia. It had been too much. Most of those with old style super had actually opted out, retiring early and taking their skills with them.

It's a good book, by the way. I think that you would find it interesting if you haven't read it.

The survey data that you refer to looks back. Other survey data that I have seen referenced, I can't give you a link I'm sorry, suggests that for the first time Australian parents do not expect their children to have a better life or the same opportunities that they had.

There are quite a few states that pay old age pension in India Evan, but what is paid is a pittance and one cannot really survive on it alone. Families still support the aged too.

On the other hand, the highly unionised labout of the socialist era, the government employees and public sector employees were covered by provident fund, gratuity, medical benefits and pension schemes and continue to be since the laws have not been changed. These are the single largest contributors to the expenditure side of the
budget and with income side stagnating, deficit finance is forcing us to have a good strnng look at this parasitical situation where the tax payer suffers while his servants enjoy benefits!

Thanks Rummuser. Are the benefits paid as proportion of previous salary, like in Europe? Or the same rate for all, like in Aus?

I guess it may vary from state to state (?)

Very much agree with WB's views on limitations to the role of Government. I keep wishing the government would get out of my life. Govt's role should be limited to securing life, liberty and property. These are fairly broad rubrics that cover the essential public goods.

In proportion to last drawn salary mostly and here is the punch line, adjusted to inflation! Very clever the bureaucrats!