Byzantium, Turtledove and the power of imagination in history 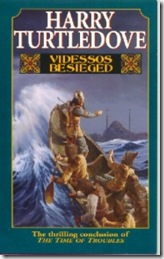 I have long been a fan of Harry Turtledove's Videssos books. He creates a very effective world in those books.

I knew that he had based the books on the Eastern Roman or Byzantine Empire, reflecting his studies there. I had no idea just how much he had done so.

I am in the process of reading Warren Treadgold's A History of the Byzantine State and Society. It is a remarkably good book. However, in reading I have been struck at just how closely Mr Turtledove did base his Videssos books on Byzantium. I would now recommend that someone who is interested in Byzantium to read the Videssos series first.

In 285 Emperor Diocletian divided the Roman Empire into two, east and west. He did so for governance reasons. Over time, the western half declined. The Eastern Roman Empire survived until 1453, still thinking of itself as Roman.

The exact date marking the formal start of the Roman Empire is almost definitional, it evolved, but 23 BC can be taken as a start because of the constitutional changes in that year. However, it is also important to remember that the Roman republic began some 500 years before this date.

These are huge time spans.

From the foundation of Rome until the end of the eastern empire we have some 1,900 years. Australia has been in existence for 220 years. All the current financial turmoil is just a blink in historical terms.

This ancient past is still remarkably close to modern Australia. A bit under eighty years ago my old school presented a classic Greek play in ancient Greek  to a Sydney audience. Later, Latin was still a compulsory subject when I started at that school for those in the more academic stream.

I provide this history for two reasons.

The first is that the changes that took place over those nineteen centuries were enormous.

From the viewpoint of the ordinary citizen,the person whose thinking was measured in perhaps four generations, the changes that they experienced were often just as great as those we are experiencing today. They had to adjust just as we do. I think it helpful to remember this. We are not unique.

The second is a more complicated point.

I can and do argue that history is important. In doing so, I mount a variety of arguments. Yet the reality is that I just enjoy it. Too me, history is fun. However, in trying to understand history I also struggle to break through to that past world. What was it really like?

The best history, the best of any discipline, comes from applied imagination. Too few people ask what it was really like, too many are simply prepared to argue present cases and attitudes.

dear Jim,
I remember that I have known a little about Byzantium when I reviewed about Russian history. In the Vladimir era, the relationship between Byzantium and Russia is so close. It is caused by the marriage which occur between Vladimir and Byzantium sister's king ( Anna palaelog. In the other hand, when the the era of Iwan III, Iwan inherit the kingdom of Byzantium as the result of his marriage with the daughter of Byzantium king (if I am not wrong). So, the symbol of Byzantium, a mythical bird with two head finally becomes the united symbol of Russia.
Tsar implemented the absolutely ceremonial governmental system (Caesaropapisme) which reflected the religion power and governmental power just run by one person.
Yeah,I think history is quite interesting. We also need history as a projector for the future

How fascinating, Niar. I did not know this - I have still to get to it in my reading!