There are usually cross-links in the things I write about even where the topics are apparently disconnected. Here one of my on-going concerns is the way our mental frameworks, the constructs we use to interpret the world, affect our thinking.

We can see this problem in history, both actual events and the way we interpret and write about them.

The Byzantine Empire is an example. In an earlier post I suggested that our perceptions of this Empire and the fall of Rome were Western European centric, leading us to ignore the long history of the Eastern Roman Empire. Now in reading about Byzantium, I find my own focus shifting as previously peripheral events move to centre stage.

To illustrate by example.

When I studied ancient history at school, our initial focus was on the fertile crescent, Egypt and the middle east. This then shifted north and east to Greece, and then west to Rome.

As our focus shifted, the various Persian Empires moved from just east of centre stage to far east, from things of interest as Empires to the more peripheral role of a distant but persistent military threat. With the fall of Rome 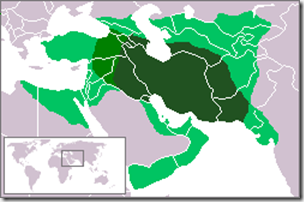 and the "end" of ancient history, Persia largely vanished. Yet, of course, it continued with its own history.

The first map shows the Persian Empire in 500 BC, the second the successor Empire in 600 CE just before it was toppled by the invading Arabs. The dark marks the Empire's core, the light green subsequent conquests.

I was not really aware of the degree of British and Western European centricity in my own historical thinking until quite recently. I was then quite annoyed, because it meant that my own thinking had been caught, conditioned if you like, by powerful but not fully seen mental maps.

What has this to do with just what I have been talking about? Well, the infrastructure document has a number of mental maps built into it. In the rest of this post I want to look at just one.

Have you ever heard of ARIA? No, I am not talking about the music industry, but about the Accessibility/Remoteness Index of Australia (ARIA) developed by the Commonwealth Department of Heath and Aged Care (DHAC) and the National Key Centre For Social Applications of GIS (GISCA).

ARIA measures the remoteness of a point based on the physical road distance to the nearest Urban Centre in each of five size classes, very remote, remote, outer regional, inner regional and major city. This probably sounds pretty dry stuff, but bear with me for a moment.

All big empires struggle with ways to administer and protect diverse and widespread territories. This is true of Byzantium, Persia or Australia.

This may sound an odd way of putting it, but Australia's current population is a bit more than the Eastern Roman Empire at its peak, while its geographic area is larger than either the Eastern Roman or Persian Empires. Yes, we have better forms of communication and transport, but the issues are the same.

The administrative forms adopted are dictated by the centre for its own reasons, but then come to affect thinking in a variety of unseen ways.

In the case of the Eastern Roman Empire, for example, the decision to establish the capital at the newly created city of Constantinople and the subsequent growth of that city completely altered the ways of thinking of the Empire's elites so far as the structure of the Empire was concerned.

Something similar has happened in Australia with the widespread use of ARIA in public policy.

The idea that public policy should take remoteness from services into account seems very reasonable. It also seems so reasonable that we should use some universal classification - after all, we want a measure of national uniformity. So we use the ARIA classifications as a guide in setting policy and determining spending to the point that it has become all-pervasive.

The problem with this is that ARIA, while based on geography, ignores geography.

I tried to find an on-line ARIA map of Australia as a starting point to illustrate this, but could not.

In simple terms, the ARIA maps show a series of remoteness zones largely radiating out from our capital cities. These zones actually bisect geographic regions.

The Murray-Darling basin is a geographic entity made up of a number of linked river valleys. We try to deal with this as an entity in talking about water, although here too I have argued that the one size fits all approach leads to bad results. But when we go beyond this and use ARIA zones we get into trouble.

The Murray-Darling basin, or New England for that matter, is divided into very remote, remote, outer regional and inner regional ARIA. The area serviced by a major regional centre such as Wagga Wagga is likely to include bits of all these four zones.

Still another example. The Kamilaroi tribal area in New England ranges from very remote on the west to inner regional on the east.

When, as has been happening for a number of years now, policy and funding is based to some degree on ARIA zones, you get a bit of a mess.

Take the delivery of health services.

Walgett in New England is remote, Moree outer regional. Both are, I think, part of the NSW Government's Hunter New England Area Health Service. The Aboriginal Medical Services in the two centres try to co-operate through shared specialisations.

Now introduce national health funding, or any other program you care to name, based to some degree on ARIA with a remote or very remote bias. Walgett may be eligible, Moree not.

Service delivery actually needs to take regional considerations into account. But how can you do this sensibly when you have to structure your approach to include ARIA based considerations in areas with multiple ARIA zones? It fragments.

I despair a bit. ARIA is deeply entrenched. It moulds thinking. I have not seen any articulated concerns about ARIA. Yet it is a problem.

I think, and I recognise that I am beating one of my traditional drums, that our predominantly metro Australians have simply lost sight of Australia's geography.

Those who make policy now largely come from our metro centres. Concerned with "broader issues", and that means metro simple because that is where the people are, they bring in policies that disadvantage country Australians.

I will stop here because I am beating my traditional drum. But I don't see a solution in the absence of major change to the way we think.