Sunday Essay - geography, history and our perceptions of our own past 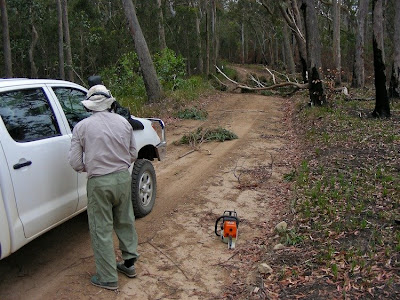 Photo: Gordon Smith, blocked road. That chain saw on the ground is just about to be used to chop up the tree so that the car can get past.

Over on the New England's History blog, I have finally completed up loading maps of the various main river catchments - there are fifteen of them - within the New England self-government area. This is the area defined by the Nicholas Royal Commission as suitable for statehood.

Those who are interested can find the entry page for the complete set here. It has taken me a little while because it's finicky and I also made a link error that required a subsequent change to every post. Sigh.

In focusing on areas within NSW that might be suitable for self-government as new states within the Commonwealth of Australia, the Royal Commission took into account financial and geographic factors. The areas must have sufficient economic strength to support statehood. However, there also needed to be a geographical commonality of interest, something that would tie them together as sensible units.

Nicholas's views here drew from a school of thought developed by Professor MacDonald Holmes and others summarised as the geographical basis of government. However, in applying this geographical approach, Nicholas had to make judgements, trade-offs taking a variety of other considerations into account.

The New England Tablelands, Australia's largest tableland area, dominates the geography of New England. To the east, major coastal rivers rise in the Tablelands and then flow east to the sea. To the west, the rivers flow out from the Tablelands to form the Darling.

We can see the impact of these geographical structures in Aboriginal times. 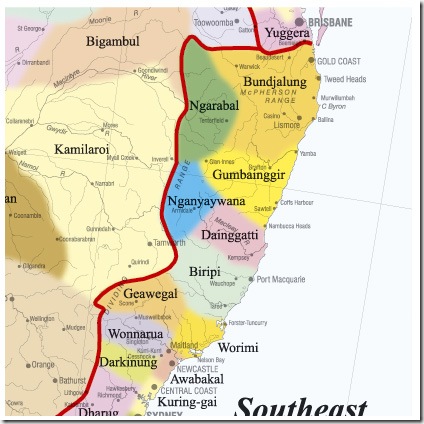 The human linkages and patterns created by this geographical structures were broken by European settlement.

The historical accident of the establishment of European settlements first at Port Jackson and then at Moreton Bay (now Brisbane), the desire of the Moreton Bay settlers to achieve self-government and freedom from Sydney, led to the creation of a new political boundary bisecting the previous unity.

Initially, the proposed boundary was well to the south of the present border. Opposition and lobbying from Sydney merchants concerned about loss of their hinterland pushed it north to the present NSW/Queensland border.

The placement of the boundary split Aboriginal territories, determining (among other things) who would be subject to NSW policies, who to Queensland. Brisbane was left as the new capital in the very south-eastern corner of the new colony, something that would affect Queensland and 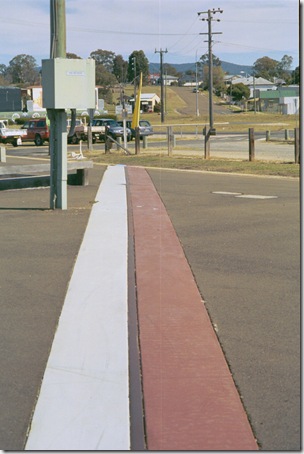 New England history, while the fact that the majority of New England remained in NSW created a new set of historical dynamics within that territory.

The differences in style between the two platforms signify a deeper divide. The countryside itself may not have changed, but on one side people looked south, on the other north.

Some years ago I coined the phrase border myopia to describe the way in which borders of all types affect thinking, creating a blindness to things on the other side. This myopia goes deep because it affects the way we think and write about history.

In Saturday Morning Musings - Elizabeth Kostova's The Historian I discussed the reasons for the relative historical neglect of the Eastern Roman Empire as compared to the Western. Here I said in part:

All history is centric. To those writing from the perspective of Western Europe, the historical story is one of their survival and ultimate growth. The Eastern Roman and indeed the successor Ottoman Empire were both seen through a frame set by their relations with Western Europe.

Something similar happens in Australia. The problem is that, pardon the pun, myopia is hard to see. It can really only be seen by someone who, for whatever reason, is forced to stand outside the commonly accepted frame.

I may or may not be right. Certainly I believe that I am, in part because circumstances mean that I am outside current historical interests and frames. However, the only way to test my views is through the study of historiography. More importantly, the study of historiography is the only way to test just what the current biases and gaps are in historical writing.

A particular problem in all this is the human tendency to assume two things.

The first is stability, the longevity of current structures and attitudes. Objectively we know this not to be the case. Yet in a practical sense it is hard to operate in any other way.

The second is the natural human assumption to assume the rightness of current structures and attitudes. This links straight to the first, the need for stability defined as protecting what we have - and think.

In his report on the areas of NSW suitable for self-government, the Nicholas Commission recommendations would have reduced NSW to the Sydney basin, Blue Mountains, Central Coast and the Illawarra. This was the area that made sense on geographic grounds, taking the needs of other areas into account.

There was no way that this could happen. It was just too big a breach of the status quo. However, the principles and approaches he and others articulated then are still relevant today. Just forgotten!

Moving from the macro to the micro, I want to finish this essay with a simple example of the importance of geography.

Regular readers of this blog will know that I am dissatisfied with much of the writing I have seen on Aboriginal history. I really would like to bring the history of the Aboriginal peoples alive as people. To do this, I need to understand as best I can history at a language or tribal level. I need to understand the dynamics, recognising just how imperfect the evidence is.

If we look at the geography of New England, the humid coastal zone - the coastal strip - varies greatly in width. In some places, the mountains really come down to the sea. In others, there are extensive river valleys.

Based on imperfect analysis of the Daingatti of the Macleay Valley, my hypothesis is that there were major differences between the Daingatti of the lower Macleay and those in the Upper River, differences linked to varying resources. Further, when we come to look at the relations between Daingatti and the Anaiwan, it was the Upper Macleay Daingatti who appeared to have the close relations with the Tablelands following the streams.

Now if we generalise this,and I think we can, then we have a small piece in the jigsaw required to explain relations among Aboriginal at the time the Europeans arrived. This piece can then extended into historical times to explain the linkages between Daingatti and Armidale. And then, to the west, look at relations with the Kamilaroi.

Oddly, or perhaps not, there is a direct linkage between this and the history of the New England New State Movement.

Of the main coastal groups, the Birpi (or Birapai) seem to have had the least Tablelands penetration. This links to the nature of the geographic barriers between the Manning River and Tablelands.

In modern times, support for the New State cause in the Manning River was lower than in other coastal regions. This held from the 1920s to the 1967 referendum. Again, this links to the much reduced linkages between the Manning Valley and other parts of New England caused by geography.