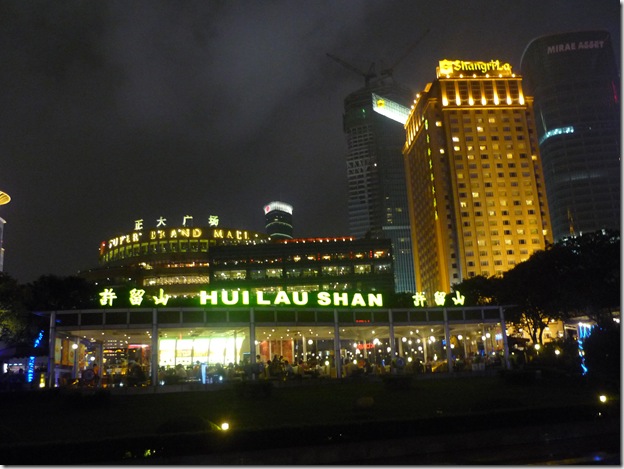 This photo of Shanghai at night seems somehow appropriate for this post.

The hotel on the right, the Shangri La, is where we stayed. It is a huge hotel by Australian Australian standards. Directly in front is a modern restaurant, behind a large, modern, retail complex.

All the evidence so far is that the Chinese economy has been weakening faster than most expected. Michael Pettis's blog explores some of the reasons for this.

Australia remains lucky, I think, because the steps the Chinese Government is taking to expand the economy continue to underpin demand for our exports. I stand to be corrected, but I think that this holds even if Michael's more pessimistic assessments prove to be correct.

I find it interesting that the Government's capacity to bring in effective expansion measures - while better than in many other countries - should in fact be so constrained.

As I said in Australia's economic stimulus packages - the practical difficulties in cranking up spend, the Australian public sector has been so cash constrained in recent years that the project pipeline is much reduced. It is very hard to switch focus from doing more with less to doing more with more.

I remain quite positive about the economic outlook in Australia, positive to the point that I am prepared to chance my arm with a direct prediction. I expect the Australian economic downturn to be significantly less than that we experienced in 1990 and 1991.

The budget surplus the Rudd Government inherited from the previous administration is one factor because of the freedom it now gives Australia to expand Government spending.

The second factor is our trade position. In this context, I was struck by the forecast that the $580 million Hunter Valley rail upgrades will increase coal export capacity from 97 to 200 million tonnes per annum. These are big numbers.

Over the next few days my capacity to post is likely to be severely constrained. I have a 1,200 word article to complete for a business magazine plus several other major research pieces.

On another matter,welcome to visitor 45,000. I think that Neil was once again the visitor (he has featured before in visitor milestones) since the visitor came from Sydney with unwired as ISP and firefox as browser.