Just to start this post with a bit of a gripe. The Rudd Government is no-where near as good as the Howard Government at putting press material on-line. This makes it hard for someone like me who is okay at analysis but who does not (for obvious reasons) travel with the press pack to comment quickly on issues.

This may be an unfair comment. But whatever the weaknesses of the Howard Government, a lot of information was provided. Of course it was slanted to the position of the Government, but any analyst worth his or her salt could adjust for this. 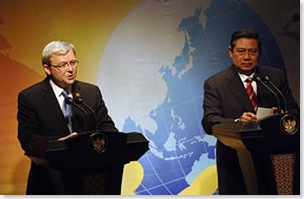 reported that Indonesia had asked for financial back-up from Australia, up to $US2 billion as part of a $US5 billion package. I said that I hoped Australia could help.

According to ABC News, the Federal Government is giving Indonesia a $1 billion loan to help it with the global credit crunch. The photo shows PM Rudd and President Yudhoyono announcing the loan at the Democracy Forum in Bali

This is a fair bit less than the amount asked. However, according to a story in the Jakarta Post, Australia is to help facilitate the entire package. Mr Rudd is quoted as saying that countries, particularly those in a same region, must cooperate in addressing the pressure from the global economic turmoil. As a good neighbour, it was natural for Australia to pledge such commitment.

In response, the President said that the loan from Australia would be ready whenever Indonesia needed additional capital to sustain economic growth and mitigate devastating impact from the economic woes.

He added that Indonesia had decided not to rely on IMF such as it did a decade ago during the Asian financial crisis. Indonesia, he said, would prefer to seek assistance from the World Bank, Asian Development Bank or traditional allies such as Japan, Australia and European Union.

I was interested in both leader's comments because they showed that both accepted that we needed to look for regional solutions.

There were other aspects of the Bali meeting worthy of a post, and I am not referring here to the extradition of the alleged people smuggler. These can wait. For the moment, I just want to say how pleased I was.

Nothing that Australia or Indonesia can do will stop the global economic crisis affecting both countries in the short term. However, moves like this lay the basis for longer term improvement.

Dear Jim,
I am glad to know the initiative from Australian Gov. to help Indonesian financial. Indonesian now need much support because of the global financial crisis, and I think that it needs exact partner that able to share and help to solve this problem.
I see that Indonesia lately increase bilateral relationship with Australia, not only in economy but also in security, law, and politic like in the AIMF meeting last month. I am glad with the better relationship that exceptionally progressing and beneficial to both of nations

Thank you, Niar. I, too, am glad that the relationship is advancing on a broader front.

I would argue also that a good long term relationship between countries, neighbours, should be based on the development of ever extending links between people.

Since you, Tikno and Aldhis started commenting, I have increased my Indonesian coverage. I am not saying things that I did nor believe before. However, I now have a stronger reason for saying and looking.

This is a good progress towards a better bilateral relationship. Not just because of the loan, but for further big matter. I hope one day Indonesia will help Australia as well.

Coming to the matter that Indonesia had decided not to rely on IMF is because (according many issue about IMF here) IMF always asking many reciprocal.

I hope, the social stigma that is more proportionally between the two countries will grow to a more positive direction, like between Indonesia - China lately. In this matter the press / media also play an important role.

I'm really grateful that you have so much concern with Indonesia.
We really have a great country here, but somehow we lack of education and self esteem of the people. That's why (as my personal opinion) we have so much debt.
We have to break ourselves free from the shadow of our long history before independence day.

Hi Aldhis. There is a glass-half empty, glass half full thing here.

I am not sure that younger Indonesians actually know what has been achieved. I can see it as an older outsider.