Saturday Morning Musings - Toorale Station and the need for balance 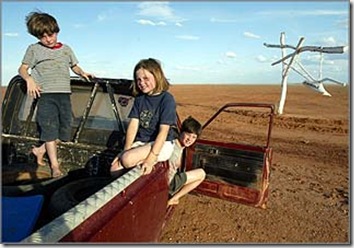 Back in 2002, the Sydney Morning Herald's rural reporter, Daniel Lewis, wrote a rather good piece on life on Toorale station 60k south of Bourke at the junction of the Darling and Warrego Rivers.

This photo shows young James prepared to drive his brother and sister round the place. For non-Australian readers, the story provides an insight into life on a remote Australian station at a time of drought.

This morning in End of Historic Tooralee Station I reported on the station's purchase by the NSW Government with assistance from the Commonwealth. It's to be turned into a national park, its water entitlements returned to the Darling River.

Tooralee occupies a special place in Australian history. It has been a key part of huge pastoral empires. It is also a place where the Australian writer Henry Lawson worked and from which he drew some of his inspiration.

It will be clear from the post I wrote that I have reservations about the sale. This is partly sentimental. But the sale also rips out a significant proportion of the economy of a town and district already in decline without providing any meaningful alternative. My very rough calculations suggest that the move will cost the economy something over $7 million per annum, the Governments involved over $2 million. To my mind, the benefits from this are uncertain, Certainly, I have not seen them argued in any really rigorous way.

Regardless of the arguments for or against the Toorale sale, I think that it draws out what I see and have discussed before as a growing disconnect between popular Australian attitudes and the actual realities facing the country.

On 18 November 2008, staff at the BP Solar factory in Sydney arrived at work to be told that the factory would shut its doors for good in March. Production of the solar panels would be shifted to "lowest cost manufacturing countries", BP Solar said. The company makes panels in India, China, the US and Spain.

The closure was greeted with some dismay by Green groups as a setback at a time Australia should be aiming to build its environmental, green, activities. Their consistent argument has been that if we move quickly, Australia will generate the new jobs required to offset other job losses.

The following table shows Australian states and territories ranked by their net contribution to the balance on goods and services in 2007-2008. All figures are in $Am.

Interesting, isn't it? Just as well WA did not succeed in seceding from the Commonwealth in the 1930s despite their vote in favour at a referendum. Further, if New England had succeeded in gaining self-government, the NSW figures would have be even worse since New England as defined for self-government purposes is a significant  net exporter.

Now if we look at the composition of our exports, they remain dominated by mineral and agricultural products. There is a disconnect here - the great majority of voters live in importing areas; their wishes dominate.

We can see this in environmental debates.

The agenda is here is strongly influenced by city voters, including the Greens whose political heartland outside Tasmania lies especially in the inner city suburbs. Nearly every major environmental cause from the Murray-Darling basin to the often prognosticated need to phase out coal exports will, in some way, impede existing export activities. In crude terms, importers are telling exporters what to do. Yet the life style and aspirations of those importers is totally dependent upon our export success.

We can see this if we take WA out of the equation, assuming that it is suddenly successful in leaving the Commonwealth. The Australian dollar would then need to fall by a very substantial margin to restore balance. Living standards would be commensurately reduced.

I am not saying that this is likely, simply pointing to the implications. Assume, for the moment, that Mr Brown and the Greens suddenly came to power and put into effect every one of the policies that have advocated. The effect on the country would be roughly equivalent to WA's  secession.

I am not saying that the Greens would do this if they came to power. Practical realities would force changes to their position. However, again it makes the point.

I am saying that we need to change the nature of political debate. So long as the majority of voters can survive cocooned in their urban ghettos, then issues like the best way to increase food production will be ignored. Until, that is, problems can no longer be ignored. Then we will have the usual panic rush for solutions that so marks Australian politics.

One of the reasons that I get cranky about all this is that it's all so darn confusing and we always seem to do the wrong thing!

As I have said before, we cut back on the use of wood for a fuel because it was bad for the environment. Yet it's not in greenhouse terms compared to other fuels. Again as I have said before, to preserve water we limit the use of water in gardens, thus ending up importing the stuff. To preserve water we limit its use even when there is lots of it. To my mind, this makes no sense.

I love wool and cotton.

PETRA campaigns against wool because of mulesing. I have seen fly-struck sheep, and it's not pleasant. People also stop using wool because it is expensive. Then we are told sheep add to green house gases. And the sheep tear up the environment. We don't grow cotton because it takes too much water.

What do we do? We buy synthetics made using up scarce petroleum resources. We let other people grow the cotton to use their water instead of ours. In crude terms, for environmental reasons, we increase demands on the environment.

We discouraged use of milk products on health grounds because of the dangers of cholesterol, the need to avoid heart attacks etc. Then we found out about calcium deficiency. Suddenly dairy was back.

To protect water, we cut rice production. Now we are importing rice based on other people's water.

And look out for hams this Christmas. On free trade grounds, we allowed greater import of pork products, so our farmers cut back on pig production. Now imported pork is not available, nor is there domestic production. There will be enough for Christmas hams, perhaps not for other things, but it will be pricey.

Free range eggs and chicken make sense, if not to the exclusion of battery farming, on the grounds of taste as well as the better treatment of chooks. Reducing use of plastic bags makes sense, although they are very useful sometimes. Cleaning up the rubbish we leave in the environment makes sense, although some rules here are dumb.

Other things do not.

Most of all, it makes no sense to create structures based on the great gods environment, efficiency and effectiveness that cannot be supported in the longer term.