Personal reflections - indigenous Australia and the variety of Australian life

I find the picture of Australia presented by the mainstream media very limited. The reasons for this are complex, but come back to the need to fit stories that appeal to the greatest number in limited space.

This is not limited to the Australian media. Try the English language of edition of Al Jazeera. Yes, there are stories there that we in Australia do not get, but the general coverage is still quite limited.

I am very conscious of this because my particular interests require me to dig below the surface to check facts and determine patterns. Let me illustrate.

The Murray-Darling basin is in drought? Wrong, parts are.

I see from the Northern Daily Leader that 2008 was Tamworth's wettest year since 1984, while 2007 was also above average. Other New England centres also experienced average to above average rainfall. So this part of the basin at least is breaking out of drought.

In a series of posts triggered by my own China visit I argued for closer relations between China and Regional Australia. This is in fact happening.

As a simple example, earlier in December,more than 300 people, including students, parents and teachers, attended a 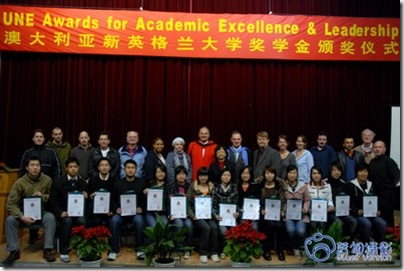 In his speech at the ceremony, Professor Webb said that the awards “acknowledge high-achieving students of Wuxi South Ocean College who by their hard work and application have achieved top results in their academic studies, as well as those students who have shown outstanding leadership qualities”.

A pathway program between UNE and Wuxi South Ocean College allows Wuxi students to undertake 2-2.5 years of study at the College (including English language studies) and then transfer with advanced standing into a Bachelor of Business degree program for their final 1.5-2 years of study.

Numbers of students in the pathway program have steadily increased since it began in 2005. “This year we received 180 new students for the UNE program, and the demand for students wanting to study at UNE is growing,” said President Zeng of Wuxi South Ocean College.

Both these examples are from my local area. Both point to the complexity of life once we move from the generalities to the more complex realities of life at local level across our various countries.

Just at the moment I am doing a short term assignment work in an office with a a substantial number of Australian Aboriginal staff. I feel more at home with them than I have in many other assignments.

It's not just that I know a bit about indigenous Australia. That's a second order issue. It really has nothing to do with how I feel.

I feel at home because most come from country New South Wales, many from New England, as I do. Really for the first time since coming to Sydney, I am working with people who understand how I feel on certain issues, who tell me the crap as they see it in current approaches. And it equates to the crap as I see it.

The motivation effects on my own work are quite remarkable. I am fighting to get a decent result for people who I see as my own. This is not an objective professional response, just straight emotion.

I do not know that I can do it, but I will at least try.

Hi Jim, just wanna say Merry Christmas to you. I might be not online for the next couple of days.
So I don't wanna loose a chance to greet my friend this Christmas.

Personally your opening sentence was full of promise. You delivered but there's a long way yet to go.

To borrow from your words, I too believe that "the picture of Australia presented by the mainstream media" is "limited" for "complex" reasons. I'd like you to explore that complexity more. The picture in areas is distorted, wildly so. It may have been ever thus, but there's a hell of a lot of rubbish, spin, hype and delusion to get through to make better sense of things when the picture is so distorted. What say you?

SA it was ever thus, and for somewhat similar reasons. However, the position today is worse because of other factors.

I will explore this as you requested.