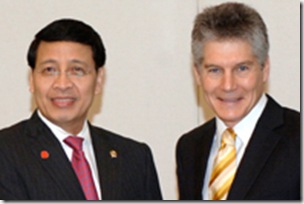 Regular readers of this blog will know that Neil Whitfield and I bounce off each other from time to time. Sort of a friendly rivalry! Drat the man, he scooped me on something of great interest in one of my own areas of interest. Here Neil's post Something good that began under the Howard government… referred to a major initiative to improve Indonesian basic education reported on ABC TV's 7.30 Report.

This is a remarkably ambitious program. It aims, among other things, to:

Looking at this program made me think of my father. When he was working for the then Economic Commission for Asia and the Far East in Bangkok in 1965, his major study was on Asian education, its then performance and ways to improve it. Later, this led to my my own sub-thesis on the economics of education.

Those who are interested in Indonesia-Australia aid cooperation can find the details here. Importantly, I think, each of the main reports has an English and Bahasa edition, so my Indonesian friends can read the details in their own language.

I have been thinking about this. I suspect that there are a number of ways.

I think that one of the most important things is to increase Australian understanding of Indonesia. Here I have three immediate suggestions. All may in fact be in place, although I am not aware of them:

These may sound small things, but each would encourage Australian involvement with Indonesia.

Good luck with that, Niar.

Thanks for the reference, Jim. I have expanded my post since.

Thanks for your attention. Also thanks to Neil. Especially to your country.

I join with Neil in wishing you luck, Niar.

Neil, read the extended post - it adds depth, although on a minor point the AWB issue had nothing to do with aid as such. This was sanction busting.