Today I was going to continue the discussion that I began in Skepticlawyer and the humanities. I will come back to this, because from my perspective, that post was simply clearing some of the ground in my own mind. However, I now have access to the Greek trip photos, and so want to continue the story from my last travel post, Postcard from Dubai.

From Dubai, we caught the Emirates' flight next morning (Sunday 19 September 2010) for Athens en-route to Crete. Flying into Athens for the first time I was struck by just h 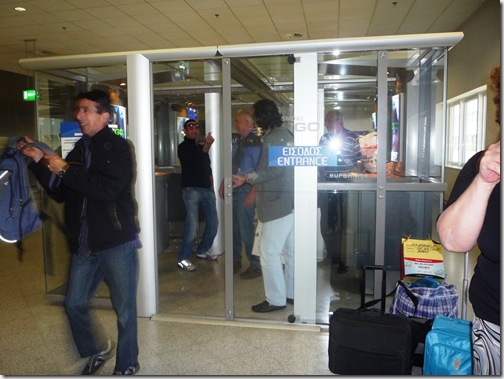 ow dry and treeless the hills were.

Upon arrival, I made my usual visit to the smoking room before exiting customs. Yes, I know that I shouldn't smoke, but it is quite a good way of meeting people. My family laughs at the way I do this, but it helps ease my insatiable curiosity!

In this case, the bloke in jeans on the left had come to visit family and was full of tips. Meantime, my family waited outside and took photos.

By Australian standards, the Greeks and especially the older ones are a very friendly and patty people. I lost count of the number of times I would get to talking with someone and then have them pat me on the back or shoulder as we walked away.

Once we were through customs and waiting for our connecting flight, youngest made a beeline for McDonalds while I prowled around looking for possible photos. I did take some, but none were especially good.

The time came to join the Aegean flight to Crete. Here we had one of those nasty shocks. At Sydney duty free, Dee had purchased two small bottles of alcohol, including a very nice gin, so that we could have a drink in the evenings. This was promptly confiscated by security even though it was still in in its original sealed bag from Sydney,

This was not the first time this had happened. Two years ago I had to bin a very expensive bottle of scotch at Hong Kong airport. The problem is that it is quite hard to know when you are likely to break the rules regarding liquids on planes. In the Greek case, we would have been okay had we put the bottles into the main luggage before checking in. This was not possible in the Hong Kong case, because our luggage was going straight to Shanghai. I was simply doomed to lose the scotch because the security arrangements required us to re-enter security.

Have you had similar experiences? Do you know what the rules are?

As an aside, Kangaroo Valley David asked for my impression of Greek security and security procedures. Apart from our annoyance over the alcohol, at no time did we find the security oppressive, nor were we worried at any time about security threats.  It just wasn't an issue.

We had wondered whether or not we might be affected by the strikes and demonstrations over the austerity measures. There were a number of demonstrations while we were there; there was at least one truck blockade with TV footage of empty supermarket shelves in Athens; some museums were either closed or, better, free as a consequence of industrial action; while people drove round old utes or small trucks broadcasting recorded protest messages. However, there were no real problems from a visitor viewpoint.

"We are lucky in Crete", one woman explained to me, "because we grow and process our own food. It's worse in Athens."

"Those politicians", she went on. "The ordinary person did not ask them to borrow the money. Now we all pay the price." The tourist season had been quite good on Crete because of international tourists. This was less true elsewhere. "Numbers ar 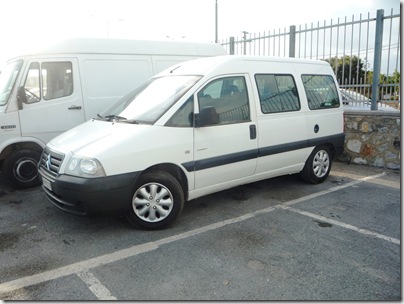 e down", another woman said on Mykonos. "The people from Athens haven't come in the way they normally do."

By the time we caught our plane for Hania, we were all very tired.

At Hania airport, we had made arrangements to pick up a van large enough to hold five plus assorted luggage. We became quite fond of that van, but initially there was all the usual confusion over things such as doors, window locks (one proved to be broken) and the workings of various controls.

Once loaded, we headed for Rethymno. All in all, I think that we made a planning mistake here. We would have been better off over-nighting at Hania.

Both Hania and the road itself are very pretty, but we really didn't have time to look at this. Instead, very tired, we had to navigate Greek roads for the first time in a strange car heading into the growing dusk. This first drive was quite nerve wracking. By the time we arrived at Rethymno, it was well after dark,

We were staying in the old Venetian part of the city. Cars are banned he re on most streets during certain times, and our hotel had no parking. But where was the hotel on the midst of all those small alleys?

By accident, we found a car park in the old city and then set out dragging our luggage through the streets looking for the hotel. We had instructions, but kept getting lost.

Next morning we were to find that the old city was really very small, but now we were just confused, in fact walking within feet of the hotel without seeing it. Finally, after multiple telephone calls, we got there.

It was quite late by our body time and we were tired, but we still needed to eat. Dropping the bags, we walked a few paces to a restaurant recommended by the Hotel with the very Greek name, Bohemian!

It wasn't a bad restaurant, actually; reasonable food and a very pretty courtyard. Youngest quickly left for bed, while the rest of us sat round and unwound. 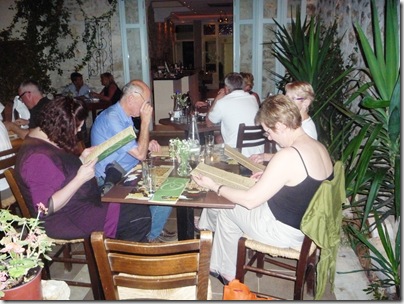 There is always something exotic and exciting in being in a strange place for the first time. Now that we were comfortable, fixed in place for a time, those narrow streets that not so many moments before had seemed so confusing were now just interesting.

During our first family trip to Europe, we collectively fell in love with Venice. Even in our tiredness, the Venetian feel to Rethymno was unmistakable. Now we were about to find out more.

But that's another story.

Jim this series is already most interesting. And I find some of the things in the pictures worthy of further comment as well.

For instance in the second last picture (street or lane) There is a very morden aircon unit clinging for dear life to a very old building; and on the left there appears to be dresses? displayed on the wall, and what look like a series of cctv/security cameras overhead and down the lane.

Interesting contrast of old and new "stuff". I will look forward to the continuing adventure.

Thanks, KVD. The dresses are easy to explain; many tourist shops and stalls. But Greece itself is a sometimes crazy juxtaposition of old and new. Some of the elctric cabling has to been to be believed, draped along walls and taped down! It was an adventure, though.