Arrival in Rethymno covered our journey from Dubai to Rethymno.

I tend to wake up early, well before anyone else in the family. That's when I do a lot of my reading and writing, and its a habit I cannot break even on holidays. So early on that first morning, I left the Hotel Leo for a walk round Rethymno's old town. I guess that I'm a bit like a dog here. I like to mark out my patch 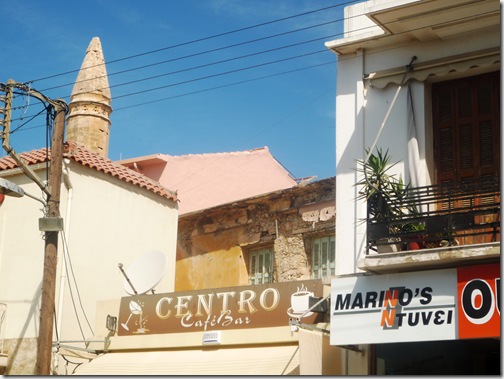 , working out just where things are.

This shot shows the old town mixture. In the front the power lines, falling back through Venetian feeling buildings to the old mosque in background. Crete's history is quite complicated, especially to someone used to Australia's relative historical simplicities. A little more on this anon.

I had been told that Rethymno did not wake early. That's quite untrue, for there are two Rethymno's.

The day begins early for many locals such as council workers or delivery people. School begins early too, around 8:15, but also finishes early, around 1.

I began my walk in the early dawn, with workers taking coffee at early opening cafes, with the street sweepers and the delivery vans. By the time I wended my way home, teachers and students were arriving at school, while those going to work for the day thronged the bus stops on the outskirts of the old town.

Second Rethymno, tourist Rethymno, springs to life a little latter. As I walked home, work Rethymno dropped away. By the time 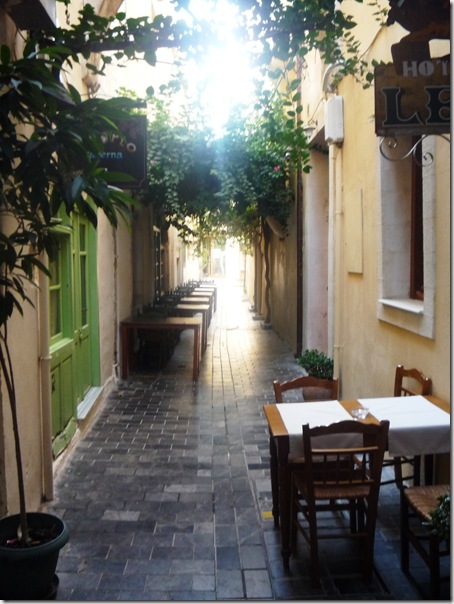 I reached our little alleyway, the world was quiet, yet to stir, the hotel doors still locked. Fortunately, my wife was already up, downstairs in the lobby using WiFi to check her emails.

Given my habits, room keys were a problem in Greece. There was usually only one per room, and that usually worked the power as well. If I left early in the morning and took the key, there was no power. If I left the key, then I might not be able to get back into the hotel.

Still on problems, the Greek custom with toilet paper came as a surprise. I am sure that inveterate travellers are aware of this one, but I was not.

We had it carefully explained to us on our arrival the night before.

I must say that I found this custom very difficult. Not only did it seem quite un-hygienic and difficult tor the staff, there was often only one small bin for all forms of rubbish, but it also ran up against deeply entrenched habits. For the first part of the trip, I just kept forgetting!

It is now 9:30 and breakfast is being served. Breakfast was included in all our bookings, something that was very important to me because I was on such a tight personal budget. Taking the first half of the year to focus on my writing as I did may have helped my writing projects, but it also left me very short of cash. Eating a big breakfast meant that I could skimp on later meals. 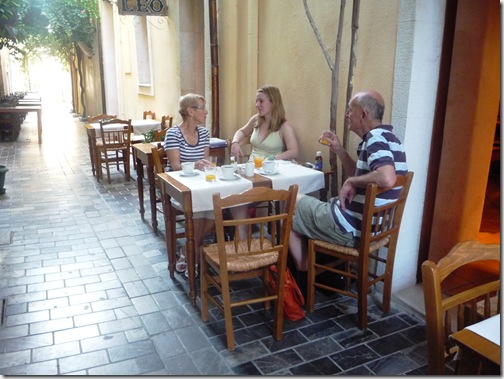 That first morning in Rethymno we gathered in our alleyway over breakfast to plan the day. Looking at the photo, I keep getting a shock at just how stooped I have become. "Stand up straight", my mother used to say to me. "Good posture is important." Clearly she was right!

In the short time we were in Rethymno, we became very fond of this alley. We gathered here, ate here, drank here, read here, wrote postcards and checked emails. We also met the people from the adjoining shops. It became our alleyway. Indeed, sitting there at home, we gazed with bemusement at the tourists who came up it, looking around in interest.

This may sound silly, but it was our alley!