Rethymno and the complicated history of Crete

After breakfast on that first morning in Rethymno (Early morning in Rethymno), the party retraced the steps I had followed in my early morning walk. This took somewhat longer, with frequent stops at the stalls and coffee shops that clustered along the small waterfront. While out guidebook was dismissive of this area as a tourist trap, and there is greater choice further back, it is very pretty. 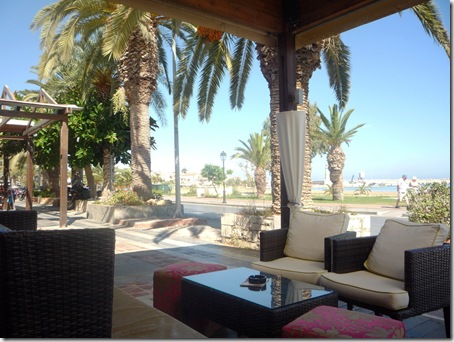 Shopping remains  a female persuasion. Considered as a spectator sport, it ranks low on my personal list. Still, it gave me lots of time to watch and listen.

The high Australian dollar and strong economy does make travel easier, but it is more than this. The mass migration to Australia after the Second World War that almost de-populated some parts of Greece and especially some of the islands means that many Greek people have family in Australia. I lost count of the number of times I met someone who had an uncle, cousin, brother or nieces and nephews in Australia.

Considering the island's size, there were fewer migrants from Crete, perhaps 7,000 in the period between 1955 and 1970, than from other places. However, there is another link. The Second World War Battle for Crete saw 274 Australian deaths, 507 troops wounded, 3,079 captured. New Zealand casualties were greater - 671 dead, 967 wounded, 2,180 captured. The Battle for Crete may be largely unknown in Australia, but it is not forgotten in Crete.

The past is always present in Greece. Old enmities die hard. To my mind, the single most important achievement of the movement towards European unification lies in the way that it has eased some of the tensions that once bedeviled Europe.

One of the first things that I do on arrival in any new place is to find a supermarket. Not only do I get tired of restaurant food, but it 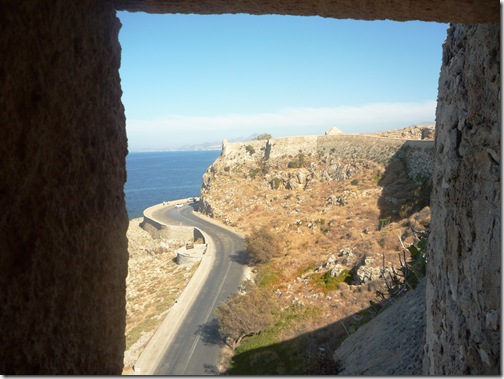 also becomes expensive. Shopping finished, we walked to the other side of the old town to re-find the supermarket I had seen on my early morning walk.

Carrying wine, bread, cheese, olives, salami and a little fruit, we returned to sit in our alley way and plan our assault on the Forteza or Fort, the huge Venetian built fort that dominates the town.

We are conditioned today to think in terms of countries with defined borders. Greeks come from Greece, a place on the map. Greek history is the history of Greece.

This boundary constrained way of thinking is deeply embedded. In fact, each part of Greece has its own history. Greece did not exist as an entity until the Greek War of Independence against the Ottoman Empire, which finally saw Greece recognised as an entity in May 1832. Athens became capital the following year.

Crete itself did not become a formal part of Greece until 1913.

Prior to 1897 and despite rebellions, it remained part of the Ottoman Empire. In 1897, great power intervention (Britain, France, Italy and Russia) saw the island effectively detached from the Ottoman Empire, leading to the creation of an independent Cretan state. In 1908, the Cretan Parliament declared union with Greece, but this was not recognised until 1913.

Sounds complicated? Well, it is! It's also quite blood thirsty.

Our concern this day was the Venetian period of Cretan history, for Old Rethymno is a Venetian city. Now here I need to bore you with a little more history.

For a considerable period of history, Crete was part of the Eastern Roman, Greek or Byzantine Empire. The names used vary, although Byzantine has become common parlance.

Crete became part of the Roman Empire in 69 BC and remained so until the eight twenties when it fell into the hands of Iberian Muslims under Abu Hafs  who established a piratical emirate on the island.

Pirates! Now that's another story. Did you know, I didn't, that the first Cretan migrants to Australia were probably a group transported to NSW in 1829 for piratical activities?

To the Government in Constantinople, the loss of Crete was not just a territorial loss, but also the creation of a nest of pirates that threatened the sea trade that was so important to the Empire. Successive campaigns to recover the island failed until 961, when Nicephorus Phocas reconquered Crete for the Empire.

Over the next two hundred years, private wealth rose in the Empire in part at the expense of central power and resources. Fatally weakened, Constantinople was sacked in 1204 during the Fourth Crusade. In the division of spoils that followed, Venice gained control of Crete. One result was the rise of Rethymno as a Venetian centre. 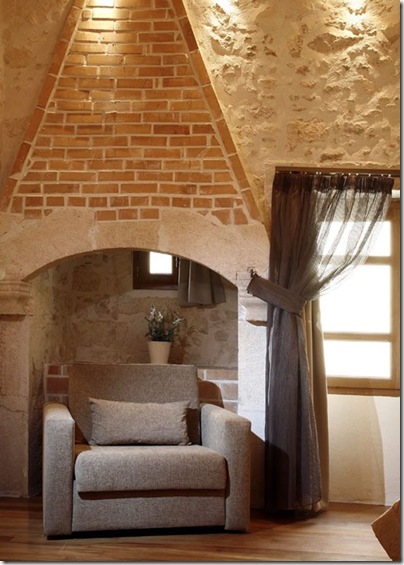 The Hotel Leo, our hotel in  Rethymno and one that I would strongly recommend, was built during this period. Dating from 1450, it was the mansion of the Venetian logal magesty.

It's role as an historical site has its problems: "We cannot alter things", explained the owner." It's very hard when it comes to changes."  Still, from the viewpoint of the visitor, the thick walls and crazy architecture adds to its charms even if it makes hotel management harder.

We in Australia teach history very badly. We like our history simple, black and white.

I mention this now because youngest is actually doing an essay on the Byzantine period and is struggling even though she has just seen some of the historical sites.

The question is fair enough, the relative importance of politics vs religion in the period leading up to the sack of Constantinople. Yet it fails because of the absence of context, of a story. It isn't just a question of religion or politics, but of a total pattern.

The geo-political position facing Venice was quite complicated. It was a city state. However, like Athens before it and England later, it ruled a maritime empire. Trade was central. In turn, this made naval power central.

Venice grew as the centre of the Eastern Roman Empire in the west, it prospered because of its later relations with the Byzantine Empire, the biggest European power of the time. A constant stream of secret messages passed into Venice to inform the Government. These, together with the Papal archives, provide a picture of the complex relationships in the Mediterranean at a time when England was still emerging.

The merchants of Venice were, I think, practical men. They had little time for the more arcane religious disputes. These were thin 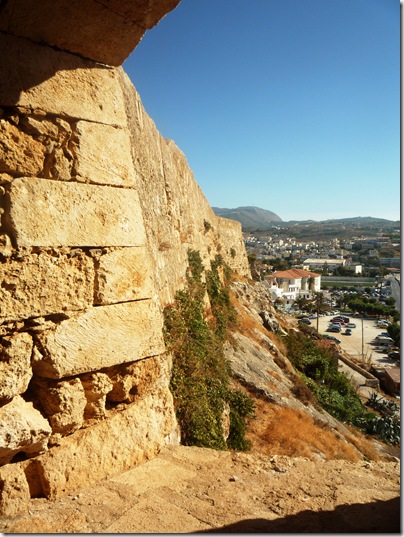 gs to be managed. Yet, as practical men, they faced a conflict between a dollar in the hand now and the longer term. Venice's role during the Crusades gave them an immediate gain in terms of wealth and power, but the damage done to the Byzantine Empire on which their wealth actually depended arguably doomed them in the longer term. However, that doom was sometime coming.

To hold their new territory, they built forts. The Forteza at Rethymno is a huge construction. Designed to protect the harbour the town grew up around it.

It was a very hot day as we walked up to the fort. The sun was merciless, especially at the top where there was no shade. I was without a hat.

Later that day my wife, who gets quite cranky about things such as my habit of ignoring the sun, took me out forcibly to by a new hat. For the moment, I sheltered in the occasional shade below the ramparts and tried to imagine how the whole thing might have worked.

At its peak, Venice had some 3,000 warships with more than 30,000 crew. All Venetian ships were designed to be multi-purpose, with cargo vessels required to carry armaments. So the old harbour below must have been crowded with craft of various type.

The fortifications themselves seemed mainly designed to protect from the sea. Yet they were also built at at a time when gunpowder was about to become important. This changed the military equation, because it meant that even the most powerful fortifications were more vulnerable. Even so, I did wonder just how a place like this might fall. 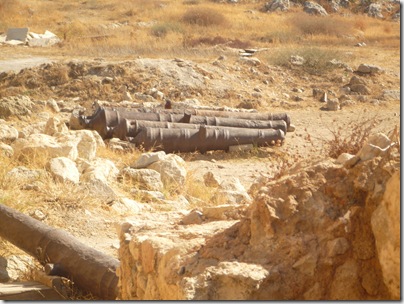 In 1645, four hundred plus years after Venice took control of Crete, the Ottoman Empire began its attack.

Four hundred years! That's a remarkable time span, even if dwarfed by the time that the various Roman Empires controlled Crete. I wonder if Australia can last that long?

The battle wasn't easy. The siege of Candia to the west lasted from 1648–1669. The last Venetian outpost finally fell in 1718. Still, now the Ottomans were in charge, even if this seems today as just a flick of an historical eye-lid, less than two hundred years.

So far as the Forteza was concerned, the Ottomans were not going to waste an important military asset. They modified it as required, but otherwise maintained it.

The last photo below shows the interior of the old Mosque built on the site in place of the previous Orthodox church. And so things change! 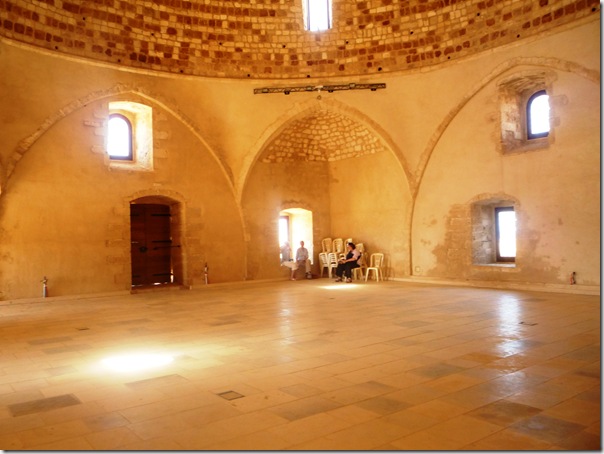