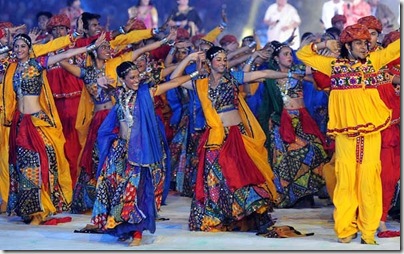 Congratulations to India on the final success of the Commonwealth Games after the initial problems. The photo of the closing ceremony is from the Sydney Morning Herald. I really wish that I had been been able to go.

One of youngest friend's, a fire eater, juggler from the University of NSW Circus Society, was flown to India to participate. Much excitement.

The chickens, and some very ugly chickens too, are now coming home to roost in Australia's international higher education sector with the announcement by Monash University that a down turn in international student numbers means that it has to cut $45 million from its budget with consequent job losses.

The initial view was that the effect of the Government's policy changes would be limited to the vocational sector, effectively quarantining the universities. As I said at the time, I had my doubts. The Howard Government policies that linked migration and higher education may have caused the problem, but the Rudd Government responses were domestically focused, inconsistent, somewhat insensitive and very bureaucratic. But then, higher education policy has really been like this for many years.

The difficulty for the universities is that they face something like a perfect storm: Australia's reputation was damaged by the Indian students imbroglio; the Government's changes to visa requirements affected both existing and potential new students; competition increased from other countries such as the US where financial cut backs meant increased targeting of international students; while the rise in the value of the Australian dollar sharply increased the costs of studying here.

While I was in Greece, Thomas asked me for a comment on the latest strategic alliances announced by the University of New England. I will do this, because UNE is actually a fascinating if somewhat depressing microcosm of the way in which sometimes conflicting tides and the resulting chop in the water affects institutions, leading to a struggle to stay afloat and somewhat stable.

I have spoken before about the attempts to introduce a new national curriculum in Australia. Now in F for fail: 'overcrowded, incoherent' national curriculum panned, the Sydney Morning Herald's education editor Anna Patty reports on the fall-out. It appears that the whole draft curricula will need major surgery.

In my last post, The Games, Murray Darling issues, Ken Mathews retires, I commented briefly on the proposals to cut water allocations in the Murray-Darling Basin. There I said in part:

This is an interesting case study from a public policy perspective because of the way it highlights problems in decision processes where there are direct and specific costs born by defined groups in return for more generalised benefits. I have argued before that present decision processes in Australia 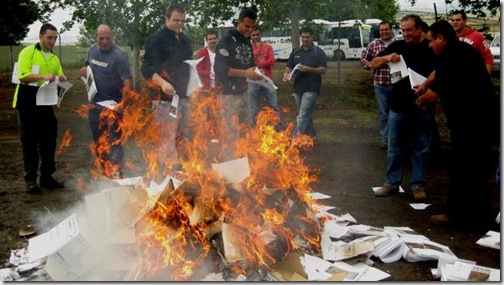 do not handle this type of conflict especially well.

The photo from The Australian shows farmers burning copies of the report. The sheer size of the public backlash within the Murray-Darling Basin has come as an apparent surprise, with angry numbers at public consultation meetings totally swamping facilities. For once, environmental groups that usually dictate the debate have been forced onto the back-foot, struggling to get any media oxygen.

I don't know why people should be surprised. It's not just the specific cuts, but the fact that the proposed cuts come on top of an anger about country neglect and disadvantage that has been growing for a long while. I guess that I have been reporting on this now for several years.

This is another case where PM Gillard must have blessed the existence of the country independents, with the decision to appoint a Parliamentary committee chaired by Tony Windsor as member for New England to investigate the matter. Mr Windsor's electorate is badly affected by the proposed cuts, but he also has a level headed approach that includes acceptance that cuts in irrigation entitlements need to be considered. Gee he's a devil for punishment though, for this is a very hard issue.

Finally, and this is really a note to myself, one of the changes to Parliamentary procedures introduced as a consequence of the deal with the country independents was greater provision for Parliamentary debate and private members bills. My impression is that this has begun to have significant impacts, but I wasn't able follow up while I was in Greece. I must do so.

We are in for a wet Summer..