We arrived in Dubai almost by accident, so accidentally that youngest did not know that we were stopping there, did not even know where Dubai was!

We had decided to fly Emirates to Greece. Dubai is the main Emirates hub, and they offered us free food and accommodation to overnight there. None of us had been to Dubai before, so we decided to accept the offer.

I had never been to Dubai before, and had wanted to see the place for some time. My first memories of Dubai and of the other Gulf states came as a child from reading the Economist and from popular books. Then the various emirates were very small and often in conflict with each other.

This was a British Empire sphere of influence, although the primary Imperial concern was not territory as such, but the protection of the sea route to India including suppression of piracy. To this end, the Empire became effective protector and umpire. The area became known as the Trucial States or Trucial Oman in reference to the 1853 treaty between the British and a number of the rulers which established British oversight.

As part of the process of dismantling Empire, the British Government announced in 1968 that it intended to end in December 1971 the treaty relationships with the seven Trucial Sheikhdoms which had been, together with Bahrain and Qatar, under British protection.

This created an unstable situation for the micro to small states now with known oil reserves but with insufficient resources to defend themselves. The nine attempted to form a union of Arab emirates, but by mid-1971 they were still unable to agree on terms of union, even though the British treaty relationship was to expire in December. Dubai and Abu Dahbi decided to form a Federation. In December 1971 they were joined by four other emirates to form the United Arab Emirates; the seventh Trucial State joined a little later.

I said that these were micro states. In 1968, the year the British announced their decision to withdraw, the total population of the area that would become the UAE was just 180,226.

The discovery of oil first in in Abu Dahbi in 1958 and then later in Dubai transformed the economic and demographic position. The total population of the Emirate of Dubai grew from just 58,971 in 1968 to 1.8 million in 2009. The population of the UAE as a whole grew from 180,266 in 1968 to an estimated 8.19 million today. This huge population increase came largely from guest workers drawn especially from the Indian sub-continent. Today, Emirati citizens make up around 17% of the Dubai population.

Dubai's limited oil reserves led to a deliberate program to diversify the economy away from oil towards services. One result was a property boom that in turn meant that the city and emirate were hit hard by the global financial crisis. Indeed, while we were there, Dubai One (the English language TV channel) was carrying stories about the latest re-financing proposals for Dubai World, the property conglomerate that was hit hard by the downturn.

Coming into Dubai my predominant impression was hazy browns and yellows and then of heat. My second impression was one of construction: there were building sites everywhere, many of them in suspended animation. My third impression was of a remarkably polyglot society.

We were staying in the Emirates wing of the Millenium Hotel near the airport. While Australian are used to diverse ethnic communities, the people thronging the lounge were remarkably varied. It took me a little while to work out that the mix reflected not just Dubai, but all the countries that that Emirates flew to using Dubai as hub. Women in full burqas mixed with western women wearing a variety of clothes; Africans in full white robes mixed with people from a variety of countries from the sub-continent. The one group not fully represented to Australian eyes were the Chinese.

Emirates has an interesting business model, for the costs of putting passengers up are then offset by hubbing savings and ancillary spending by visitors. It is clearly important to the Dubai economy: there is an entire infrastructure dedicated to helping visitors spend!

More broadly, the entire Dubai economic model could not happen in Australia because it breaches fundamental Australian assumptions about economic efficiency and the role of the state. I will talk more about this in a later post. For the moment, I simply note that Australian policy approaches would have left Dubai relegated, as has happened to so many parts of Australia, to e 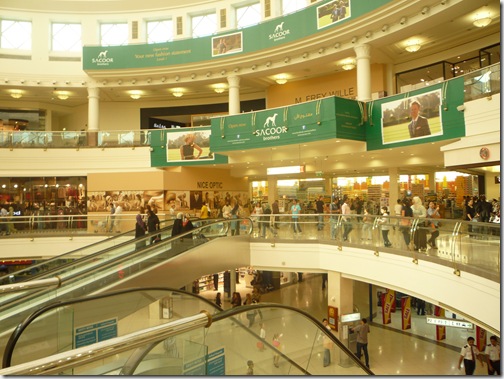 Leaving our hotel in the late afternoon, the women decided to take a shuttle to visit one of the main shopping centres (photo).

This proved to be a mistake, for it was a mall much like any other. The people were a little different, and so to a degree were the goods, a mixture of the mundane with the up-market. It was interesting watching, but a mall is still a mall.

What we should have done given our limited time was to take an organised bus tour. They were being sold in the lobby and would at least have given us a better feel for the place, including the new developments. I had wanted to see these because of all the stories about Dubai's official extravagance, the desire to create a modern centre in what is, after all, a desert land.

After Sydney and its water restrictions, it was interesting to observe the use of water to create lawns and other greenery.

Getting back to the hotel, I wandered off looking for a beer and found Biggles. As I sipped my drink, I thought of the incongruity of a bar in modern Dubai named after such a quintessentially English school boy hero! Mind you, the restaurant next door was called Cactus Joe's, thus getting both sides of the Atlantic.

Watching the economic news that night, it appears that commercial lending is again expanding in the UAE, so the economy is recovering.