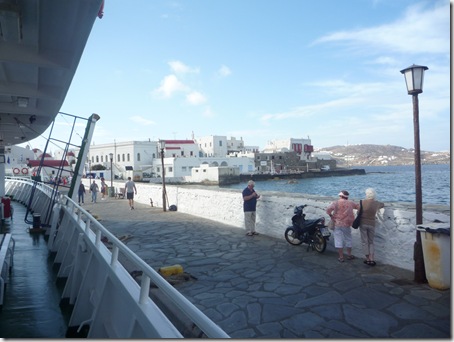 Continuing the story of our Greek trip from my last post, Santorini to Mykonos, Day 11 dawned hot. Today we were going to visit the ruins at Delos.

After breakfast, we walked down to the port to catch the ferry for the short trip. The cruise ships in town had followed us from Santorini.

The sheer size of tourism on the Greek Islands is mind-boggling by Australian standards. I have included this shot just because it shows part of the deck of our ferry, and this is only one of the ferries bring people to Delos.

All groups reinvent history to suit their own needs. I have already spoken of the the way that the modern Greek state drew from history, sometimes with disastrous results. I have also spoken of the Western European love affair with things Greek. With Delos, we enter a new period in Greek history, one central to Greece's view of itself, as well as Western European perceptions of Greece. As we shall see, those perceptions had their murky elements.

The island of Delos is small, 3.43 square kilometres or one square mile. Like the other Greek Islands it is dry with almost no resources. Those living there had to import all their food. Yet this became one of the centres of the ancient world. 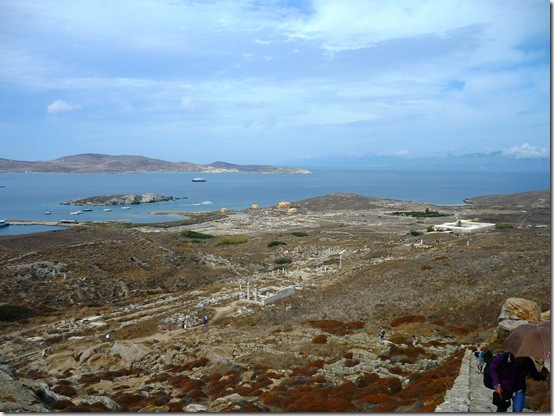 The sheer scale of the ruins is daunting. I tried to find a photo that would properly show this. This one at least gives a hint.

I now need to introduce some new historical players that I have deliberately left aside to this point.

I noted before that I found Greek history all very complicated at school. Keeping things very simple, the term Greek applies to people who spoke a broadly common language. That language was not uniform, but broken up into a series of dialects. The concept of what it was to be Greek or Hellenic varied over time and was affected by the politics of the time.

By tradition, the Classical Greeks thought of themselves in terms of four major tribes, the Ionians, Dorians, Aeolians and Acheans. Just as the very idea of Greek was a cultural rather than political construct, the tribes are best thought of as ethnic groups; the term ethnic meaning people thought to have common ancestry who share a distinctive culture comes from Greek. They were not political entities.

Common ethnicity does not necessarily make for harmony. The territory occupied by those who might be thought of as Greek was broken up into many small territorial entities, small in size and population. Sometimes brutal warfare was common, even among groups sharing common ancestry.

What I really hadn't got my mind around was just how small these territories were, nor how closely they pressed up against available resources. A few years ago I re-read Homer's the Odyssey for the first time since school. Then I had read it more as an adventure tale, now I was surprised at the material sparseness of life, at the apparently small th 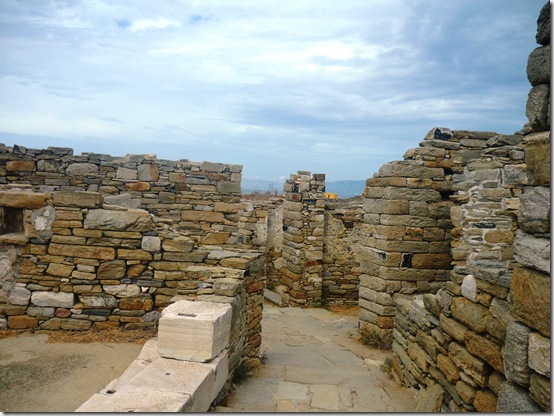 ings that triggered warfare; cattle, for example, were very important.

This sparseness compares with the wealth of the earlier Minoan period and would change later.

I have included this photo from Clare because it actually captures the denseness of later urban life on Delos.

The Greeks were great colonisers. When drought or over-population threatened or sometimes just for wealth, settlers were sent out to found new colonies, new political entities. In turn, those colonies founded new ones. To my knowledge, Greek history is the first in which colonies and the processes of colonisation was identified as a specific historical theme.

During this change process, systems of government changed. Monarchical rule was replaced by oligarchies and tyrants and then by collective decision making systems; the concept of democracy emerged.

The tribes or Greek ethnic groups formed one element in this mix. Of the four traditional groups, the two most important were the Ionians and Dorians. I think of them as the sailors and land-lubbers, although that's not quite accurate.

The Ionians seem to have emerged first. Without going into the whole history, that's beyond me, they were a sea-faring group that occupied the islands and mainland areas adjoining the sea. Then came the Dorians. While they included sea-going cities, Corinth is an example, they were more a mainland people.

The two groups have become identified with the two city states that came to dominate, Sparta and Athens. Both exercised and exercise a powerful influence on European thought.

Sparta emerged as a military state whose focus was war, self-defence and sacrifice. Spartan, the idea of restraint and self control, of 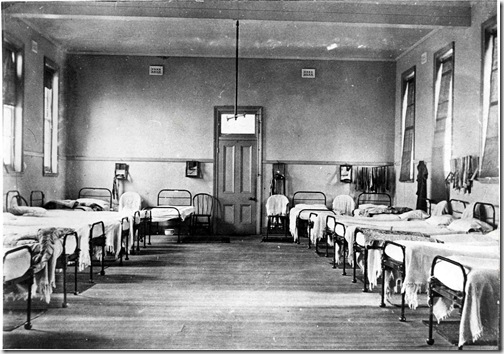 This ideal of self-defence and sacrifice, exercised a profound influence on European thought, including the English boarding school systems.

This photo from my old school, a school then in very much the English tradition, shows a dormitory from 1913. I would certainly describe the conditions as spartan!

Love of things Spartan came to be called Laconophilia after Laconia, the area of Greece that included Sparta. This had various manifestations that included incorporation in the ideology of Nazi Germany. There the idea of self-sacrifice, of military virtues, of subjecting personal behaviours to the needs of the state, had an obvious appeal. But so did the idea of exclusion, of the preservation of ethnic purity.

Athens, by contrast, was far more individualistic and mercurial. Athens gave us the concept of democracy and some of the greatest thinkers the world has known. But it was also a blatantly opportunistic and imperialistic power in a way that Sparta could not be. Sparta wanted to preserve its status-quo, Athens wanted to triumph. This meant that you could trust Sparta in a way not possible with Athens.

In my next next post in this series I will look at the conflict between the two and of the role of Delos in that conflict.