I was asked where the history in my Greek posts came from. For that reason, I thought that I should record just what I have been doing.

I have a reasonably good general knowledge of the history of the area, something I have referred to from time to time in the posts where I have used personal examples to illustrate, However, even I get confused with the complexity of it all!

Starting with sources, part of the historical information used come 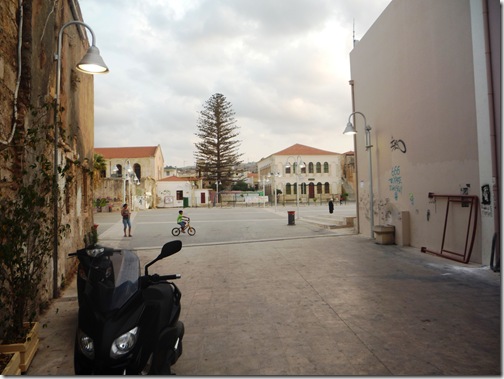 s from my own knowledge and previous writing, part from guidebooks, part from the museums we visited, part from Wikipedia and other on-line sources.

In talking about the Venetian influence, for example, I have visited Venice so have some feel for visual aspects.

This is another shot from Rethymno on Crete where I began the Venice story. You can see the Venetian influence.

I know the general history of Western Europe and had  visited museums in Venice and the Vatican looking at matters Venetian from different perspectives.

Then in 2008, I became interested in the history of Byzantium after reading Elizabeth Kostova's The Historian. This lead to a series of posts linked in some way to Byzantium. So I knew a bit about the relationships between Venice and the Byzantine and Ottoman empires and the mixing of peoples and cultures that occurred as a consequence. 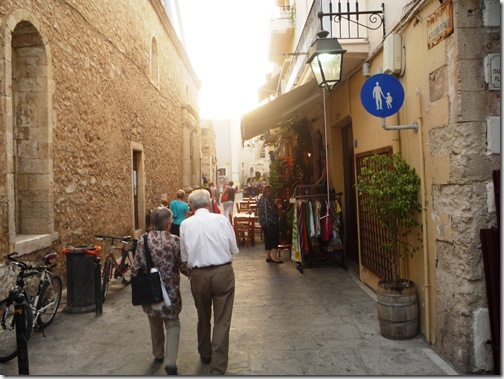 This next shot is also from Rethymno and is in fact only twenty metres from the first shot.

There is Venetian influence on the right, but on the left is the old mosque built when Rethymno was part of the Ottoman Empire.

One of the problems with a complex history with so many over-lapping influences that affect the present in so many different ways is to know just how to treat it. Here I wanted to tell a story that might be of interest to some, but I also wanted to advance my own knowledge.

I decided to chunk it, break it into bits, introducing it as I went along. Given my personality and interests, I allowed myself the freedom to wander a little and to personalise. Mad, bad and dangerous to know is an example, for this rambles quite considerably.!

What won't be clear, however, is that the rambling is not completely random. I have a picture in my mind. In part, I am introducing threads that will be important later, such as the English love affair with the idea of things Greek that I refer to in Mad, bad and dangerous to know. In part, I have themes in mind that I can consolidate later on.

One theme, for example, is the link between Greece and Australia.

In Arrival in Iraklion, for example, I talk a little about the Battle for Crete during the Second World War. This battle is largely forgotten in Australia, yet it is still part of the the living history of Crete. 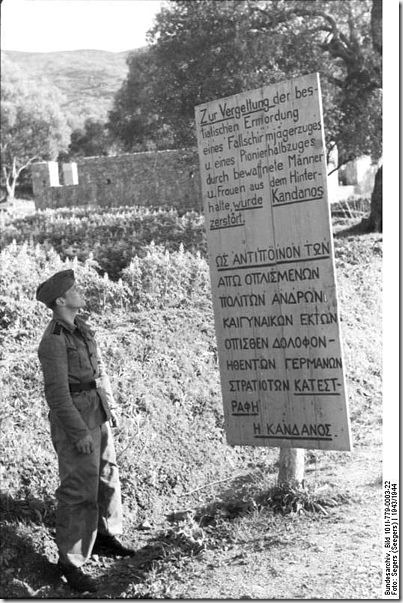 The fact that so many New Zealand and Australian soldiers died or were captured may be largely lost in the memory of their home countries, but it is still alive in Crete. The sheer brutality of events, the number of Cretans killed relative to the size of the population, the number of families affected, means that the story lives on.

This photo shows the sign raised by the Germans after the razing of the village of Kandanos. The sign reads:

"Kandanos was destroyed in retaliation for the bestial ambush murder of a paratrooper platoon and a half-platoon of military engineers by armed men and women."

What are we talking about? Well, on 3 June 1941, German forces completely destroyed the village and killed 180 of its inhabitants in retaliation for resistance to the German invasion.

I have commented on a number of occasions that the soil of Greece is soaked in blood.

Later, I hope to consolidate both themes and historical blocks into a new series of posts.

The sources I use for each part of the story vary depending on the story. I am not writing an academic history, not even a school essay equivalent. They cannot use Wikipedia, for example, whereas I can use whatever I like to source my stories. However, I am also an historian, so I do watch my sources for both bias and conflicts.

In the case of the Battle for Crete, I already knew a little of the Battle. Sadly, the local museum in Iraklion has very little in the way of English translations. This led me to write:

If I had a single wish from my trip, it would be that the local authorities in Iraklion would add English translations.

It's not a big museum, just a few rooms, but its focus and small scale captures a slice of shared history in a powerful if sad way.

Limitations in sources and time therefore led me to rely primarily on Wikipedia. 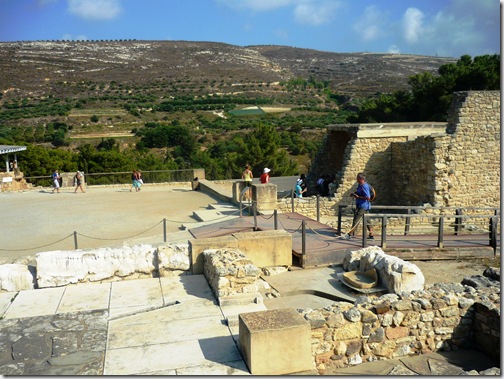 My stories on the Minoans such as Knossos and the Minoans drew on a wider range of sources.

This is another photo of the ruins at Knossos, this one by Clare.

As with other posts, I relied to a considerable degree on Wikipedia. However, here I have been interested in the Minoans since I was at school when the decipherment of Linear B was still quite a big story.

One of the most interesting things about the Minoans was the huge advance in our knowledge since I first studied them. Akrotiri, for example, was unknown. So I was able to draw on museum exhibits and on other on-line sources.

To me, there is a huge fascination in the chase, in the discovery of things unknown. In the case of the Minoans, I tracked through source after on-line source. In doing so, I also interpreted the evidence through the pattern that was emerging in my mind about the Greek Islands themselves.

I don't think that you can fully understand the history of an area until you have actually seen it. In a formal sense, I have spent four years in all on ancient history courses at school and university. One visit to the Greek Islands shifted my perspective in fundamental ways. I simply didn't understand key things.

In my posts I am not writing formal history, although I have given links to sources. Rather, I am a story teller. I want to explain to myself and others what happened and why. I don't think that that's a bad thing!

"I don't think that that's a bad thing"

It is a very valuable, and interesting, thing. For which, I hope, you are accorded due credit and thanks.

My knowledge of your topics comes more through religious history which is most interesting - particularly with reference to Byzantium. I have a 'net friend who is a Serbian Orthodox cleric in South Africa. He reminds people that in the East there was no Enlightenment. In the West, the Enlightenment was a watershed, a break in way thought proceeded. In the East, without the Enlightenment, it is continuous.

Thanks, David, much appreciated, and thanks too Miss E.