After my diversion into Greece, history & the on-line world, this post continues the story from  Last day on Santorini. 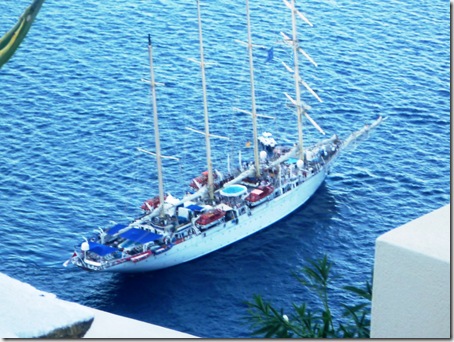 Day 10 dawned bright with the sun sparkling on the water. We were leaving this morning, travelling north by ferry to Mykonos.

Mykonos is one of the best known Greek Islands, made famous through visits by the rich and famous.

Like Santorini, it is part of the Cyclades and shared that Island group's turbulent history. However, Myknonos also introduces another thread into the complex tapestry of Greek history, the story of what became known as the classical period in Greek history. The key here is not so much Mykonos itself, but the nearby island of Delos. More on that later.

We gathered on the terrace to have breakfast for the last time. We were catching the same jet cat that had brought us to Santorini, and after the very bumpy trip that I described in Journey to Santorini, there was a degree of trepidation.

Then packing. I don't know about you, but I always find re-packing a bit of a chore. Somehow, things seem to spread! Still, it had to be done. After a final check under the bed to discover the things that always seemed to get lost there, we said goodbye to the friendly people at the Hotel Kavalari and then dragged our bags to the bus station for the trip down to the port.

The bus trip down the zigzag road along the side of the caldera provides some spectacular views. However, I think that you have probably had enough views by now! 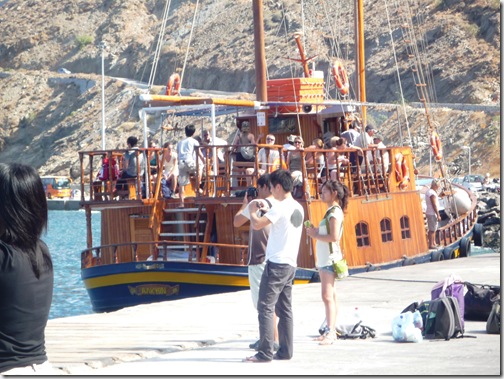 We were early, and so had time to spare.

The main party adjourned to a nearby cafe, while I went for my usual wander.

In this case, I was fascinated by a little sailing boat nearby that was getting ready to depart. I was also fascinated by a group of Japanese tourists either boarding or just taking shots.

Santorini appears to have a far more diverse tourist mix than Crete. On Crete, for example, I saw very few tourists from Asian countries, while Santorini attracts tour parties from all over the world.

At this point, I found myself in trouble with the Greek port police who sent us all away from the port area with something of a collective flea in our ears. It appears that we were breaching some form of port security rules.

I joined the others at the cafe to watch the ferries and wait. Santorini really does have a remarkable number of ferries of all shapes and sizes.  Finally, we saw the jet cat on its way. 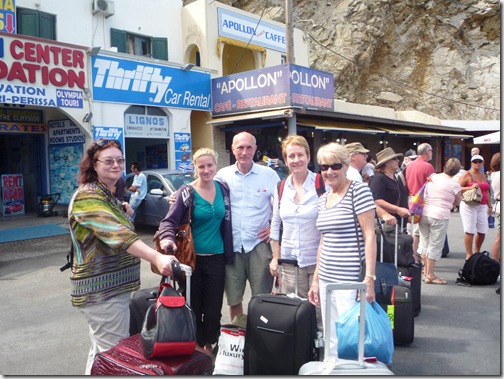 We got a friendly Chinese tourist to take a group shot and then joined the growing queue.

At Iraklion, they had loaded the luggage onto the back of the boat via a conveyor belt. However, at intermediate stops where they are trying to get large groups on and off as quickly as possible, you have to carry the luggage on.

It was all quite interesting just from a logistics viewpoint.

Even with some crew help, it takes time to unload the luggage of arriving passengers. Then it takes time to load the in-coming luggage, putting it on a place on the deck by destination. The crew want to start loading as soon as possible, but they and the port police have to keep the the incoming and out-going passengers separate in order to avoid a total mess. They don't always manage this, leading to incoming and outgoing passengers dragging bags in opposite areas in the same narrow space.

The crew was the same as our previous trip. Unlike then, they were clearly unstressed, nor was there obvious residue.  Worries about a rough  trip set aside, we settled down on board to read or play cards.

I got out Thucydide's History of the Peloponnesian War, determined to this time finish re-reading it since its history was relevant to the next stage. I had now at least refreshed  my memory on the location of some of the places, but I still couldn't get into it. Putting it aside, I read the guidebook on Mykonos instead. 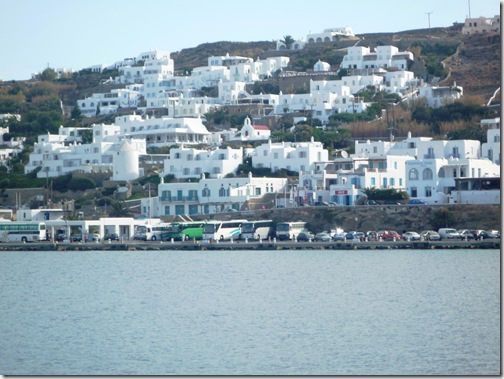 My first impression through the boat window as we arrived was, as with Santorini, just how bare it all was.

The whitewashed or white painted houses with their painted doors and shutters shone in the baking sun, but there were few trees. Mykonos is apparently a largely granite island with limited water. Like Santorini, it relies in part on a desalination plant.

I know that I have talked a fair bit about water and its importance, but it remains one of the key things that I discovered on this trip. In thinking about the history of the region, I simply hadn't factored this in.

We had no idea how to get to our hotel from the port, so we called and they sent a car.

The Semeli was a different type of hotel to those we had stayed in on Crete or Santorini. Built on the side of a hill overlooking the old town, this was a far more luxurious hotel with room service, comfortable rooms, balconies and a swimming pool. Clare was in her element! 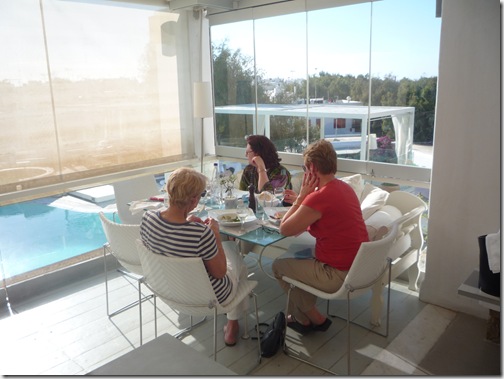 I found myself completely disoriented trying to work out just where we were, where the old town was. I mean I could see it, but I just couldn't get any real feel for direction and distance.

After an afternoon knap and a swim,  we decided to explore the town and, if possible, find a supermarket. One look at the hotel prices was enough to show us that it was really outside our normal budget.

We got directions and went for a wander. The old town proved very easy to find. Out the door and just down the hill. Then we got completely lost wandering the narrow streets, something that seems to happen to a lot of people. Later, we would get properly orientated. For the moment, it was just confusing!

Still, we found our supermarket and then the road back to the hotel for a late evening picnic dinner in the room and on the balcony. Tomorrow Delos.