Akrotiri, Greece and the passage of time

It is taking me far longer to write about the Greek trip than the trip itself. Still, I am enjoying my slow meander. 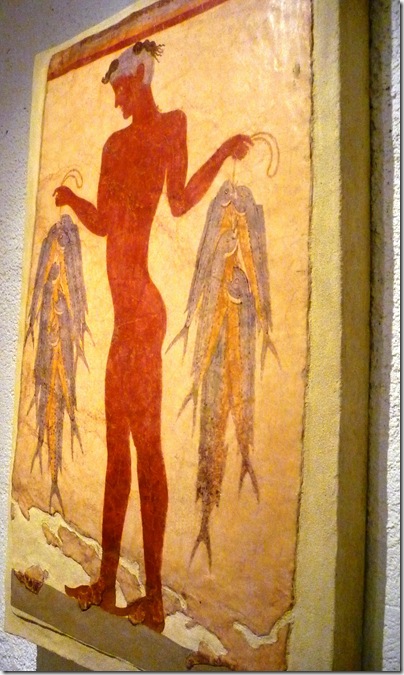 Continuing the story from Idle on Santorini, one of the main things that we had wanted to do on Santorini was to visit the  ruins of the Minoan port city at Akrotiri. However, they were still closed to the public, so we had to make do with museums. The main archaeological museum is good, but I found the displays at the Thera Foundation especially good in giving me a feel for Akrotiri as it was.

You can see what I mean if you look at the photo.

The inscriptions found at Akrotiri are all what are called Minoan Linear A. Unlike the later Linear B, nobody has yet been able to translate Linear A because we don't know what language it might have been based on. We are therefore totally dependant on the archaeological record.

The reconstructions of the various wall decorations at the Thera Foundation display really do bring elements of the old city alive, as well as the drama of its re-discovery.

We don't know what the Minoans called the city. Instead, we use the name of a nearby village. What we do know is that it was one of the most important prehistoric sites of the Aegean.

The first settlement at the site dates from the Late Neolithic times (at least the 4th millenium B.C.). During the Early Bronze Age (3rd millenium B.C.), a sizeable settlement was founded and in the Middle and early Late Bronze Age (ca. 20th-17th centuries B.C.) it was extended and gradually developed into one of the main urban centres and ports of the Aegean.

The town's life came to an abrupt end in the last quarter of the 17th century B.C.

There were severe ear 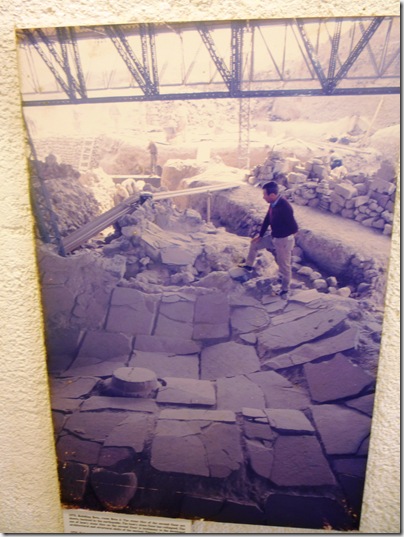 thquakes. This photo shows a stone floor that has fallen through from the story above.

From the absence of human remains on the site outside formal burials, we know that the inhabitants fled with what they could carry in advance of the eruption that buried the city.

Did they get away? I would like to think so, but I have an uncomfortable that their escape may have been at best short lived given the size of the tsunami that followed the eruption.

When I first did ancient history, Akrotiri had yet to be discovered.

Professor Spyridon Nikolaou Marinatos began his career in Crete as director of the Herakelion (Iraklion) Museum in 1929 where he met Sir Arthur Evans.

See how things go round? We are back in Crete!

A strong nationalist, much of Professor Marinatos's initial focus was on Mycenaean Greece because he regarded the Mycenaeans as the first Greeks.

I haven't spoken of Mycenae before, but it is also part of the rich historical tapestry that I have been talking about.

In the second millennium BC Mycenae was one of the major centres of Greek civilization, a military stronghold which dominated much of southern Greece. The period of Greek history from about 1600 BC to about 1100 BC is called Mycenaean in reference to Mycenae.

The major excavations at Mycenae were carried out by the German archeologist Heinrich Schliemann, later famous for the discovery of Troy.

Past, present, myth and legend are all entwined in the story of Greece.

Schliemann believed that the early stories of the Greek past such as Homer's Iliad and the Odyssey reflected real history and set out to prove it. Forced to leave school at fourteen, he made a fortune in business and used this money to fund his explorations and excavations, just as Evans had used his family money to fund the excavation of Knossos.

Lara Croft and Indiana Jones may be distortions, but they do reflect our continuing interest in an archaeologist past when things were freer, when the next great discovery was just around the corner.

The later decipherment of Minoan Linear B by Michael Ventris was an important piece in this jigsaw because it showed that Linear B, the later version of the Minoan script,  was based on ancient Greek. The fact that Knossos appeared to have come under Mycenaean control was important. More important, was the affirmation of the antiquity of Greek and, by implication, of the Greeks.

Returning to my main story, Professor Marinatos formed the view that there might be a Minoan settlement on Santorini and went looking for it. If it were there, it would be near the sea since Minoan civilisation depended on sea trade. Akrotiri seemed a logical site, so he searched. There, buri 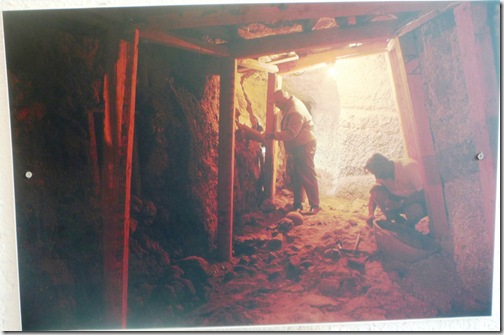 ed deep under volcanic residue, he found what he was looking for.

As the photo shoes, the initial excavations were as much mining as your standard dig. Slowly a complete buried town emerged.

The technical challenges must have been immense, for this was no small site. The buildings they were slowly uncovering had been entombed by the eruption, but they had also been damaged by earthquake and eruption. Further, once exposed to the atmosphere, some deterioration was inevitable.

The dangers involved are illustrated by the incident that closed the site to tourists. A roof being built over the site collapsed with fatal consequences.

The site finally revealed was large (ca. 20 hectares) and contained a network of narrow streets, multi-story buildings with elaborate drainage system, magnificent wall-paintings, furniture and vessels. Like Knossos, the buildings were probably quite dark inside because of the absence of natural light, making lighting important. The various imported objects found in the buildings also indicate that Akrotiri was in contact not just with Crete,  but also traded with the Greek Mainland, the Dodecanese, Cyprus, Syria and Egypt. 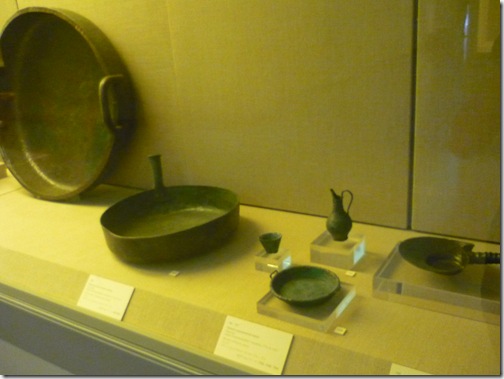 The household utensils left behind in the evacuation tell us a lot about simple domestic life.

Just to illustrate this let me quote from the Thera Foundation's description of one building.

The House of the Ladies was three-storeyed, at least in its west wing where, because there has been less erosion of the deposits, the lower courses of the walls of the third storey are still preserved. Communication between storeys was via two staircases: a main one in front of the entrance, at the south-west corner of the building, and a service one almost in the centre. On account of its large dimensions - some ten rooms on each floor - the building was provided with a light-well, in contact with the north flight of the service stairway. This light-well, a typical feature of palatial architecture in Crete, is the only known example at Akrotiri. From its size and the presence of the light-well it seems that the House of the Ladies was an imposing edifice which, judging by its equipment, must have been a wealthy private residence. 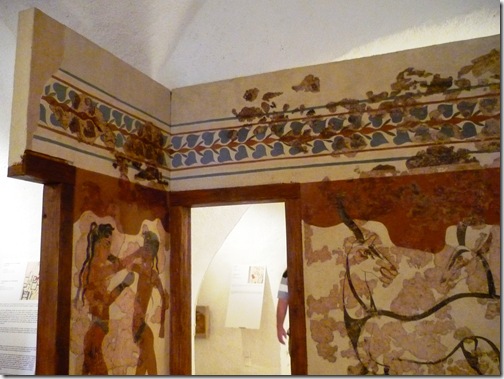 So in the seventeenth century B.C we have a pretty fair size mansion.

As I indicated earlier, in all the remains, it is the art that provides the best picture of life.

The Minoans adorned their walls with a variety of frescoes and decorations. They provide colour and emotion to what might otherwise seem just a collection of artifacts.

We can actually see them alive despite the passage of so many millennia. That's not a bad record.

For the person looking for some untouched part of the world.